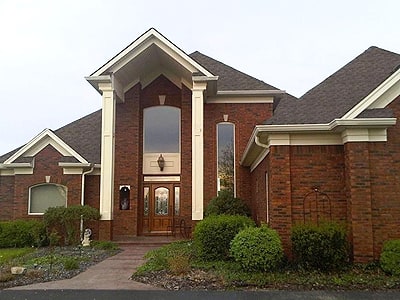 Louisville is home to a large number of Angi members made up of homeowners who rely on the service to guide their selection of highly rated service providers for all things home.

Nearby is Elizabethtown – a hub for medical professionals and industrial manufacturers. Just across the Ohio River from downtown Louisville is New Albany, Ind., where you’ll find the Culbertson Mansion. This famous state memorial honors the local who was once considered the state’s wealthiest resident. Even as new construction springs up along the river, the city carefully guards its historic sites.

The same holds true for Jeffersonville, where the Big Four Bridge project bespeaks the revitalization of the downtown area. Back in Kentucky, all of downtown Bardstown is a historic district. Travelers along the Bluegrass Parkway marvel at the large old trees and gorgeous buildings. Some stay and become residents.

When Louisville area locals or residents in surrounding communities build new homes, replace windows in their existing houses or simply need a contractor to fix or upgrade the structures, they rely on the list. Join Angi Louisville.

Top pros near you in Louisville