When you hear of flooding damage, you probably think of burst pipes or big storms. However, the wrong washing machine connections can cause severe damage.

A small part can cause big damage

My saddest emergency plumbing job was caused by a standard washing machine hook-up. While a homeowner was out of town on vacation, she asked her neighbor to watch the house. After the neighbor noticed water seeping under the front door and garage, she contacted the homeowner, who contacted me.

I inspected the home and found the basement had been flooded. The natural oak parquet flooring, warped and curled up at each end, was floating around in 4 inches of water. Half the dry wall on the ceiling had become so soaked it had fallen, covering the leather furniture and slate pool table.

And all of this damage was caused in just a few days by a bubble in the side of a washing machine hose. 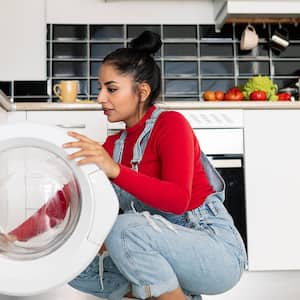 The good news was that we found the leak and could fix it in only 10 minutes with 10 dollars in parts. The bad news was three-quarters of the home had been ruined and would likely take months of major renovations to make it livable again.

What parts cause the problems

When building homes, some contractors choose less expensive solutions for plumbing and mechanical issues to maximize profits. For washing machine hook-ups, that usually means a couple of cheaply made $1.95 valves on the hot and cold pipes. Unlike bathroom or kitchen faucets, these cheap valves are not made to be turned on and off very often. If they are, they often develop small dripping leaks out of the packing nut on the stem to the handle.

The same cost-cutting measures sometimes hold true for people selling and/or installing appliances, which in the case of washing machines means basic, black rubber hoses are used to do the hook up. According to the insurance industry, these types of washing machine hook ups account for most of their water damage claims due to failed plumbing. 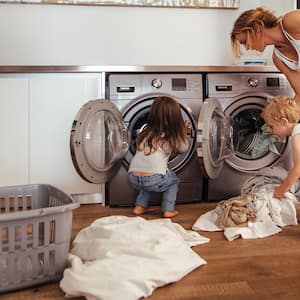 Fix the issue before it's a problem

The valve we use and recommend has a single lever that turns both the hot and cold on and off at the same time, and it can be operated easily, quickly, and without fear of failing, even if it hasn’t been used for many months.

The hoses we like are either the high-end (check the warranty) braided stainless steel hoses, or the so called ‘automatic shut-off’ or ‘Floodchek’ rubber hoses that restrict and shut down the water flow if there’s a ‘full flow’ type failure in the machine or connections.

Add some security with a drain pad

On new homes or major remodels, we recommend the washing machine be placed in a drain pan, which will catch minor leaks or slow leaks. However, because the drain must be plumbed to a location outside, it’s often a bit expensive and something of a project to add on existing homes.

How to Avoid Appliance Repairs

Cleaning and maintenance tips to extend the life of your appliances and save you money on costly repairs.

If the washing machine has a good quality shut-off and hoses that are replaced every 5 years, that washing machine and it’s plumbing go from one of the most likely plumbing assemblies to fail in the home to one of the least likely. Chances are you’ll never return home from a vacation to find your flooring afloat due to a $1.95 part that failed while you were away.

As of July 14, 2016, this service provider was highly rated on Angie's List. Ratings are subject to change based on consumer feedback, so check Angie's List for the most up-to-date reviews. The views expressed by this author do not necessarily reflect those of Angie's List.