6 Tips for Keeping Your Dryer Alive

Having a dryer in your home is a blessing—one you should hold onto! Whether you’re a new homeowner or a veteran, it’s easy to forget about nurturing your dryer when you’re only using it a few times a week.

It’s actually easier than you realize to improperly care for the appliance, resulting in long-term, structural damage, and repairs. By implementing the following tips, you can prevent hazards and incidents and extend the life of your appliance.

Although this may feel tedious and maybe not worth your time, cleaning your lint screen after each dry load will save you time and money in the long run. Lint can be dangerous; the motor could burn out and potentially catch fire if you don’t remove it. The reason for this is that lint buildup prevents adequate airflow, trapping the heat inside the dryer.

Pull out the lint screen, typically located in the bottom of the door pocket or the back corner of the top panel. Pull the screen straight out. You can use your hands to gather the lint from the screen, run them across the screen, and gather all the lint into a ball.

Once you have a small ball of lint, you can rub the ball over the screen, which will attract more lint. You can also wipe fabric softener on the screen to remove residual lint. If there’s a ton of lint, use a cleaning brush or a vacuum with a brush attachment to collect the lint.

Pro tip: In addition to clearing it after each dry load, deep-cleaning the lint screen every three months with detergent will save you time and effort when you clear it out after loads.

It can be so tempting to gather all of your clothes and stuff them into the dryer in one load—we all love efficiency (plus, doing multiple loads is exhausting, and it’s easy to get lazy). This tactic, though, is a risky game and can result in dryer malfunctions. When you do large loads, your clothes don’t receive the air circulation they need.

The lint screen isn’t the only place lint accumulates. Over time, lint builds up in the vents and dryer duct, decreasing efficiency, causing the dryer to overheat, and posing potential fire hazards.

To clean the dryer vents yourself, use a soft cloth, feather duster, or cleaning brush and gather and remove all lint. 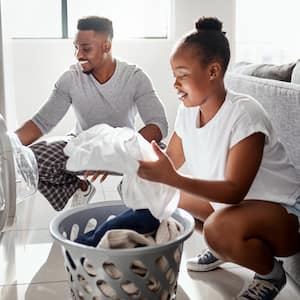 If your “clean” laundry has a not-so-great smell, your dryer vent could be the culprit

Using liquid fabric softener can help eliminate lint buildup on your clothes, which is great for you since you’ll have less lint entering the dryer to worry about in subsequent loads. Although dryer sheets are cheaper, they leave more residue in the dryer, such as lint, grease, and various forms of debris that can clog the dryer filters and result in malfunctions.

Another way you can prevent residue and debris buildup and clogs in your dryer is by cleaning the drum from time to time. The drum comprises the round interior of the dryer. Use a microfiber cloth and dab the drum with rubbing alcohol, removing any residue. Let it dry thoroughly before using the dryer again.

Pro tip: Use a vacuum to dry the space between the drum and the door.

6. Clean and Dry the Dryer Exterior

Cleaning the outside of your dryer is probably not your top priority (it doesn’t sound that critical, right?), but doing so can prevent mold and mildew, which sometimes arises due to moisture on the areas around the door. Make sure there is ample space between the dryer and the walls making it easier to remove lint/debris and clean. In addition, the dryer just generally needs adequate space for ventilation.

A clothes dryer is made up of many pieces, but these six parts tend to be the common culprits behind dryer repair issues.