Before embarking on a bathroom remodeling project, know where the plumbing supply needs to go.

It may seem obvious at first, but when homeowners plan sprawling, expensive bathroom remodeling projects, they often forget one of the most important components: The plumbing. Several plumbing professionals explain why homeowners should consult a plumber before, during and after a bathroom remodel.

Logistical issues, the age of the house, unexpected developments and cost of materials and labor will impact the job in ways homeowners may not expect. Bathtubs, low-flow toilets, upgraded shower heads and bathroom sinks all play a role in adding to the complexity.

First up, plumbers recommend hiring a general contractor to oversee your bathroom remodel. The job involves so many moving parts that need to be done in the correct order that it requires an experienced overseer. A general contractor makes sure the job runs smoothly, and often maintains relationships with subcontractors necessary to ensure fair prices and quality work.

“A good general contractor makes all the difference in a remodel,” says Adam Faren, owner of Pipeline Plumbing in Lake Oswego, Oregon. “So do your homework.”

How Much Does a Bathroom Remodel Cost?

Get a plumber involved early

Chris Cunningham, owner of Service Plus Heating Cooling Plumbing in Fishers, Indiana, says plumbers should be involved early in the remodeling planning process, and homeowners need a very clear idea of their specific plumbing needs. Those bathroom remodeling ideas will seriously affect your cost.

“If you’re upgrading from the original equipment, trying to improve water pressure or adding multiple heads, that’s going to require extra capacity,” he says. “They need to make the calculations to be sure they can deliver that pressure, or if they need to boost it with a pump or some other plumbing method.”

He also notes that early planning allows plumbers to determine what is and isn’t possible, which makes a big difference in the expense of your remodel.

“Sometimes you can’t move a toilet or bathtub without major structural changes to the floor joists and support,” he says. “Have your builder or remodeler verify that they can move the drains from where you want without compromising the floor. I’ve seen customers run into situations where they want a toilet in a spot where we can’t physically get it.”

Note the age of plumbing pipes

Faren­ says the age of the house makes a big difference and could lead to unexpected changes. “If the house was built prior to the 1970s or 1980s, the water piping could be galvanized metal, which usually entails having to replace the piping with modern plastic that doesn’t rust or wear out,” he says.

New plumbing fixtures can lead to new demands on the home’s plumbing infrastructure and main line, he says, and remodeling plans should account for this.

“Sometimes, when you’re adding fixtures, the water service line connected to the water meter needs to be replaced and upgraded one or two pipe sizes,” Faren says. “Otherwise, you may end up with a line that’s not up to code.”

Bathroom Remodeling Trends That are Here to Stay

Don't flush your budget down the drain on transient trends

“A lot of things can be triggered by this kind of work, so your contractor and plumber need to be thinking about code requirements in the city,” he says. “Different cities and states will have specific things that need to be done mechanically and electrically.” 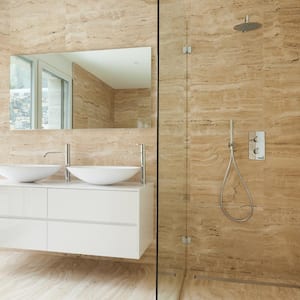 How to Make Your Bathroom Remodel Totally Stress-Free

Create a spa-worthy space without all the stress

Many times, homeowners with no plumbing are surprised to learn how expensive the work can be, especially with a major remodel. “Sticker shock is always the biggest issue when we tell people what things cost,” Satalino says.

Even when physical changes are possible, different options come with very different costs and effort.

“The physical reality is, you’re always limited in terms of the structure of the home,” he says. “The way the beams and cross members run, whether or not you can get access to the vent and waste lines. If it’s a slab floor, how do you get to the water piping overhead? Are they aware we’re going to have to saw-cut concrete? Is there sufficient grade? All these things and more come into play.”

Plus, in many cases change happens abruptly. “A lot of times, we don’t know what we’re going to find until we open up the floor,” Satalino says.

And sometimes, plumbing needs must yield to good old-fashioned physics. “It’s all gravity,” Cunningham says. “It has to slope downhill.”