How Much Does It Cost to Install an Interior Door?

The average cost to install an interior door is $743, depending on the type of door.

Doors can often be an overlooked detail in your home decor, but the right door can really set the style of the room. The average cost to install an interior door is $743, but can range between $360 and $1,155, with costs jumping for more complicated styles, such as pocket or French doors.

How Much Does It Cost to Install an Interior Door Near You?

While there are some slight regional differences in pricing—the cost to install an interior door in many metropolitan areas is more expensive than less populated locations—the ballpark range was roughly the same. Here are some common costs across the U.S.:

How Much Does It Cost to Install an Interior Door Yourself?

The cost to install an interior door yourself is minimal, coming in around $25 for the cost of hardware—and, of course, the door itself—assuming you have basic tools such as a miter and a power drill.

That said, the project is very detail-oriented and errors could cause uneven framing, a damaged trim, or a door that won’t latch. Unless you’re experienced, we recommend checking out these tips for hiring a door fixer and then contact a top-rated door installer near you.

Properly done, installing an interior door on your own should take two to three hours for a pre-hung variety, or about five to six hours for a slab type. 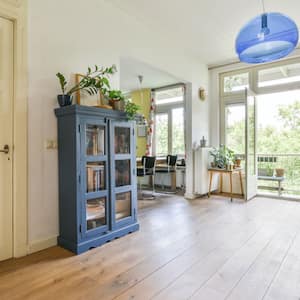 When painting your house, don’t forget the doors

The cost of installing an interior door depends on the type of door, doorframe, and any extra add-ons.

The cost to install an interior door largely depends on the type of door. A simple bifold door will likely cost $100 to $300 to install, while something more complicated, such as a pocket door, will run you $100 to $2,500.

When you’re making the choice between a slab or pre-hung door, keep in mind there are different costs for installing each type.

A slab door doesn’t have a visible frame or any hinges. The door can be hung into an existing frame, painted or stained, and finished with a knob.

A prehung door, on the other hand, includes a door slab already hung in a frame, with cut-outs for the doorknob and strike plate. Typically, the space around a prehung door needs to be finished with drywall, trim, and paint.

The cost to install a slab door is $50 to $400 on average. The cost of installing a prehung door varies greatly by size:

A hollow core door is the most affordable option, ranging from $30 to $400, with the average being in the $50 to $150 range. They are made with cardboard slats and wood veneer exteriors and are a good choice for a room where you don’t mind sound leakage, like a closet.

Solid core doors are more expensive, ranging from $70 to $250, though some high-end models can cost upwards of $500. This kind of door is made from wood particles held together with glue. They are a better choice for rooms where you need better sound insulation, such as an office or bedroom.

Solid wood doors are exactly what they sound like: a door made entirely of hardwood. The cost largely depends on the style of wood the door is made from:

Aluminum doors, often installed as sliding or bifold types for wardrobes, cost $300 to $2,000.

The trim sheaths the space between the frame and drywall, giving your newly installed door a complete, finished appearance. It costs $2 to $3 per linear foot.

Hinges are around $3 each, though fancier models can run into the double digits. Locks and doorknobs fall into the $20 to $200 range, with the higher end representing more technologically advanced keyed and coded locks. A basic knob for an interior door will likely cost $20 to $40.

There are several add-on features and services, some optional and some not, that will increase the cost of your installation. These include:

Bathroom, bedroom, and hallway doors can be focal points

How Much Does It Cost to Install an Interior Door by Style?

The primary factor that determines the cost to have an interior door installed is the type of door.

Bifolds have two or more hinged panels that run on a set of tracks. When opened, they fold in half, which can be a space-saver. A single bifold door costs between $35 to $60, while a double bifold will run you $45 to $70. The cost to install this style is $100 to $300 per door.

Like bifolds, pocket doors are space-savers. These doors slide into the wall, rather than opening towards or away from you. They are expensive to install; labor costs for installing pocket doors range from $100 to $2,500 per door.

French doors are double doors with several glass panels. When opened at the same time, they create a very wide, dramatic opening, and are typically seen in dining rooms and living rooms. Traditional styles are hinged, but some models are single doors or sliding doors. The cost to install French doors is typically $250 to $500 per door.

Sliding bypass doors consist of two door panels on parallel tracks or one sliding door and a fixed panel; in either scenario, one door can pass the other via the tracks, making sliding doors a solid pick if you need to install a door over a large area but can’t afford or can’t accommodate French doors. Commonly used for closets, expect to pay $250 to $500 to install sliding bypass doors.

A kind of sliding door, barn doors have a visible track and are notable for their rustic, farmhouse look. They are most commonly made of wood but can be purchased in other materials, like steel. Barn doors will cost you an average of $100 to $300 to install.

Saloon, or swinging cafe, doors have a pivot hinge so the door can swing open both forward and backward. Expect to pay $100 to $300 to have a saloon door installed.

Murphy doors add a bit of mystery to your home, as they are “secret” doors that look like bookcases. In addition to adding an air of intrigue, they provide useful storage space while hiding an entryway to another room, which might be one where you keep valuables. It will likely cost around $500 to install a murphy door in your home.

Get your difficult door back in the swing of things

FAQs About Installing an Interior Door

If you want a doorway widened, whether to accommodate French doors or to design a more accessible home, expect to pay $300 to $2,500, depending on how wide you want to expand the doorway, whether the wall is load-bearing, and other factors.