How Much Does a Burst Pipe Cost to Repair?

You'll pay between $150 and $5,000 for professional burst pipe repairs

From sub-freezing winter temperatures to old corroded pipes that couldn't take the pressure, the threat of burst pipes can keep a homeowner up at night. Repairing a burst pipe costs an average of $500 for professional repairs, but can cost as low as $150 to replace very small areas of the pipe. The high price range of burst or frozen pipe repairs can increase to $5,000 if you need to install new pipes underground or take care of related water damage.

After some detective work to find where the leak is coming from, you can determine the cost of your burst pipe repair based on several factors. The price range depends on the size of the affected pipe, labor costs, pipe material, and the pipe location.

Size of the Pipe

Start by estimating the size of the damage. On average, you'll pay between $150 and $250 per linear foot for labor and materials. Keep in mind that replacing the pipe alone—before labor—only costs between $0.50 and $30 per linear foot. In other words, labor costs account for the vast majority of the price.

In some cases, a clog or a frozen region of the pipe may have only affected a single area. Not only will this require fewer materials, but it's also a quicker fix. However, if your pipes are bursting from age and corrosion, your plumber will likely recommend updating any vulnerable areas of the pipe.

In many cases, the larger the broken pipe, the higher the per-linear-foot cost. This expected increase is due to the additional labor required to access, repair, and replace complex pipework.

A whopping 80% of the cost to repair a burst pipe accounts for labor. Plumbers charge either a per-hour rate, a flat fee, or a combination of the two structures, depending on the extent of the repair. Here are some ways the price will break down:

Labor flat fees and the hours it takes to fix a burst pipe will heavily depend on its location and material. For example, hard-to-access copper pipe repair will cost more to repair than a PVC pipe under the kitchen sink. 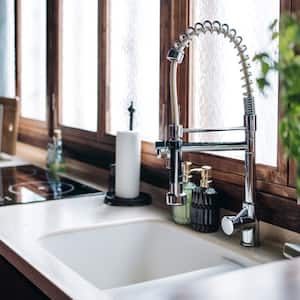 Signs of Frozen Pipes: How to Spot Them Quickly

Replacing the pipe is often necessary when it bursts from corrosion, clogs, or freezing. In some lucky cases, however, you or your plumber can repair the pipe without replacing it, such as with pipe tape or epoxy.

Assuming that you need to replace the pipe section after a significant burst, however, the repair cost will depend heavily on the pipe material. Pipe types that are common in modern homes, like PVC and galvanized pipes, are less expensive to repair than less-used types, such as copper and fiberglass.

Unfortunately, there are many reasons why a pipe may burst, especially in older homes. In all cases, something from outside or inside the pipes causes the material to weaken. Water pressure will then push through the weak area of the pipe, causing it to burst. Some of the most common reasons a pipe burst are:

The type of damage affects the cost to repair a burst pipe because it determines whether you can patch the pipe or need to replace it. Replacing the pipe will cost between $360 and $2,000. For corroded pipe repair costs, prices can stretch into the thousands if you need to replace old pipes showing significant wear and tear.

The pipe's location dictates the price due to how easily you can access it and the price of repairing the plumbing. You'll find the full price range of repair costs—from $150 to $5,000—based on location.

For example, plumbers may need to remove drywall, floorboards, or ceiling boards to access the pipe. They may even need to dig into your yard to access the water main line, sewer line, or sprinkler system, causing your project cost to reach the highest price range. 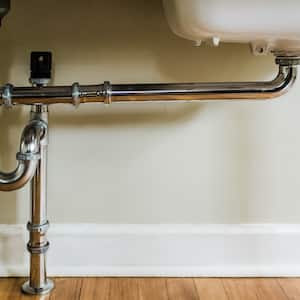 How to Keep Pipes From Freezing

Keep your pipes in tip-top shape all winter long

If you're lucky, the problem pipe burst in an accessible spot around waterproof flooring, such as in the bathroom or an unfinished basement. In most cases, though, the plumber will need to alter other parts of the house to fix the pipe.

When a wet spot suddenly—or slowly—appears on the wall, it's time to investigate a leaking or burst pipe behind it. Burst pipe repairs behind walls cost between $150 and $500 to repair, not including the cost to repair the drywall at $50 to $75 per square foot.

Burst pipes in the bathroom can be either incredibly accessible—such as under the sink—or a real headache to reach, such as beneath the toilet, shower, or tub. You can expect to pay between $150 and $800 for bathroom burst pipe repair costs.

Pipe repairs in the kitchen are very similar to those in the bathroom. They are either very easy to reach—like underneath a sink or behind an appliance—or deeper within the floors and the walls. Pipe repairs cost between $150 and $500 on average, depending on the pipe’s location in your kitchen.

Accessible basement pipes that service the floors above it cost between $200 and $600 to repair and replace after bursting. However, if the pipe lives under the concrete floor or behind a concrete wall, prices could climb as high as $4,500.

There are few more nightmarish home issues than a sewer line bursting. The cost of professional sewer line repairs—because you'll need to call a pro for this one—ranges between $1,300 and $4,700. After the fix, you will also add deep home cleaning costs for an average of $500 to eliminate lingering smells or mess.

Water main lines can burst due to roots, pressure, severe clogs, or time. The cost to repair a burst water main line ranges from $150 and $2,000. Full main line replacement costs vary depending on if you choose trench or trenchless repairs that dig up your yard to access the pipe, ranging between $50 and $250 per linear foot. 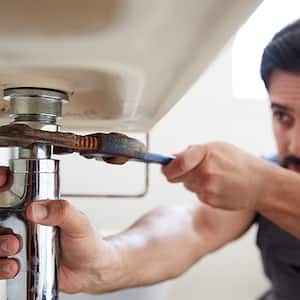 How Much Does a Bathroom Leak Cost to Repair?

Cost to Repair a Burst Pipe Yourself

Learning how to repair a pipe yourself can save you money on labor costs and on water damage that can occur when you're waiting for a professional plumber to arrive. You can often purchase a DIY pipe repair kit for about $25, not including the cost of necessary tools like a pipe cutter and soldering tool.

Keep in mind that you should only repair a burst pipe yourself if you are certain the leak occurred in one specific spot. If you suspect further damage, such as a clog or corrosion, it's critical to hire a local plumber to address major issues quickly. Do not attempt to repair or replace major pipe issues on your own, otherwise you could unintentionally cause further damage to your home’s water system.

Cost to DIY a Burst Pipe vs. Hiring a Pro

You will save up to 80% on burst or frozen pipe repair by doing it yourself. However, the DIY approach is only appropriate for small pipe leak repairs and pipe replacements. You should not attempt to fix major leaks or burst pipes on your own.

While professional repairs for small leaks cost as little as $150, the DIY method costs $25 not including tools. You can also consider self-repairs as a temporary fix if the plumber can't come out in a hurry. When hiring a pro to evaluate and fix your burst pipe, keep in mind that you can expect to pay $45 to $200 per hour for their services.

Keep these general add-ons and long-term care costs in mind when you’re facing a burst pipe.

It's best to assume that burst pipe repair costs will be 15% higher on average to take overage fees into account. The extra expenses account for everything from additional pipe replacement to structural updates affected by the leak. For example, the cost of mold remediation is between $10 and $25 per square foot on average. General water damage repair costs add another $4 to $7 per square foot onto the cost, too.

Don't skip out on your plumbing inspection every two years to avoid another burst pipe in the future. The inspection costs about $200, but it could save you thousands of dollars in the long run.

7 Signs of a Burst Pipe

A burst pipe is not always as obvious as we'd like it to be. This headache-inducing problem can happen over time or all at once. After freezing weather, it may not even show itself until after the pipe thaws. Possible signs of a burst pipe include:

These signs aren’t all encompassing but knowing how to spot a burst pipe will give you a better chance at finding the problem sooner rather than later.

How to Save Money by Preventing Burst Pipes

Preventing burst pipes is always the best way to lower repair costs. Even if you lose the battle in one area of your plumbing, attentive maintenance can lower the chances of extensive damage.

Here are a few tips for preventing burst or frozen pipes:

Additionally, get to know your home insurance policy before a pipe freezes or bursts. Water damage is commonly covered for something like a burst pipe, but there are caveats in every policy. Some policies will not cover burst pipes and related damage if it occurred due to the lack of maintenance.

Yes, a burst pipe is considered one of the most common types of home emergencies. Turn off the water supply to your house and call a local plumber the moment you suspect a burst pipe. Not only can a frozen or broken pipe leave you without water, but the break can lead to water damage, structural issues, and mold.

There are several methods to temporarily or permanently fix a burst pipe. In a pinch, you can seal up a small leak with either silicon pipe tape or epoxy specifically designed for this purpose. You can also purchase a pipe repair kit that supplies a clamp and gasket to seal the pipe. In the long term, a plumber will either remove the damaged area of the pipe and add a replacement coupling or replace the entire length of the pipe between joints.