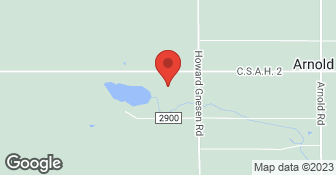 Finding the right construction company to take on your project can be overwhelming. From small handyman repairs to full service new home construction, we offer you peace of mind up front. Whether that means providing materials, photos of similar work from our project gallery, or getting you directly in touch with one of our many satisfied customers, please do not hesitate to ask! We want you to feel as confident in our work as we are. ...

Three words: hire this company! I feel I got exceptional quality and price. Chad and his employees were very kind, hard working, experienced, knowledgeable and punctual. This company was recommended by the company that built me a new garage. Because my yard where the garage was build needed so much fill to bring it up above the level of the alley, it left quite a bit of dirt sloping away from the new garage. Initially, I were only going to have a ramp and stairs put in. I had thought we might just get some grass on the dirt, but after talking over with Chad, a retaining wall was decided on as a need rather than a must. My wife and I did not feel we were pushed into this decision and we had neighbors who said we should really have a retaining wall. Because our yard was so low, Chad asked if we thought about raising our sidewalk, which we had. So we decided to tackle that as well. Lastly, he asked if we wanted to remove the porch next to our house, in part because it had heaved out of position years previously. Initially we were reluctant, but decided to replace that as well. I am very glad I did. Even though the project grew in scope, Chad always talked with us before making changes and he explained why he thought the changes were necessary. He made us feel very much included in making decisions and his explanations made us feel confident in the choices we were making. Now that the project is done, I couldn't be happier with the workmanship and the end product. We are so happy with Chad's work and prices that we are going to have him side our house and we recommended him to a neighbor.

See "what did the provider do" above.

I have mixed feelings about writing this review. The quality of Anderson's work is superb. The cleanup was as good as a professional cleaning service. Delays and poor responsiveness were major problems. We made the agreement in early September of 2013. Tim assured me the work would be completed in October, November at the latest. This was important as the house was going on the market. Work wasn't completed until late winter. I would have chosen another contractor if I'd known Anderson would take so long. Our rough winter made the work more challenging. However, the work was supposed to be done a month before our first blizzard and severe cold arrived in December. There were weeks when I wouldn't hear from Tim. I only called after weeks of delay, inaction or no response. His mobile phone wasn't answered. Sometimes the mailbox was full. The woman who answered the office phone was polite and promised to pass on my messages. Rarely did I get a response. Email wasn't better. Tim explained there were delays on other projects, they were waiting for my windows to be made, his internet was down, etc. My brother's a commercial contractor. Two other brothers run an interior stone business. I get that projects are delayed. I also get that small jobs like mine get bumped by bigger jobs. But 6 months? It shouldn't have come to this. My advice to future customers is get a written deadline with penalties for delays. I didn't because it was a small project that could be done anytime over a month or two. When November passed, I was stuck with an agreement without written deadline. That's my fault. Anderson's work quality and cleanup are both good. Get a good contract and you should be fine.

Description of Work
The project was repairing hail damage to our home in Duluth's Morgan Park neighborhood. Roofs were replaced on garage and our portion of the four unit town home. Trim was repaired. Damaged windows and screens were replaced. I also had a pair of large windows replaced on the 3rd floor as long as the crew was working on our property.

We had tried everything short of replacing the doors to stop the leaking. It leaked underneath - which is unusual. Anderson Building and Restoration came out and fixed the problem. They stripped out all the old caulk and materials we had tried to prevent the leaking. They recaulked with good material. We can't thank them enough.

Description of Work
Stopped our two patio doors from leaking underneath.

Chad arrived on time for our consultation. His estimate was fair and timely. He showed up as arranged and worked tirelessly. The work was completed quickly and professionally. There was no mess for me to clean when the projects were done. The final bill was as quoted without any additional charges. The work was performed as agreed and additional findings were repaired without additional cost. The men that he brought with him were respectful, professional, and trustworthy. I would hire Chad and his crew again!

Overall it was perfect. They were very professional and fast. We needed an estimate for insurance purposes but we haven’t started the work yet. We are still considering them.

Description of Work
I got an estimate from Anderson Building and Restoration. We wanted our basement restored after it had flood damage.

He was professional and efficient. He cleaned up when he finished and he was comeptitively priced. He stands behind the quality of his work and came back to fix a small issue.

Description of Work
He installed new windows in my home.

We offer free estimates from the owner of the company. We've had the same crews for 15 years. We are a good Company and our main advertising is word of mouth. We do insurance work and private and can take checks or credit cards.  …

We are here for the sole purpose of helping you keep your home in tip top shape. We will meet with you free of charge and go over your project list and give you an estimate for each item separately so you can get things done that are the most important to you when it fits your budget. We have a crew of ten and look forward to serving you to make your home a comfortable place to be with everything working the way you want it to. Give us a call today for a free review of your list.  …

J.O.A.T LLC No Job to Big Or Small Don't Hesitate to call We have the experience and dedication to get the job done right! Specializing in Remodeling services; We guarantee your satisfaction, and we won't leave until the job is done right. We pride ourselves on the quality work we provide, while delivering great customer service! Call or click for your FREE estimate today!  …

Insured
All statements concerning insurance, licenses, and bonds are informational only, and are self-reported. Since insurance, licenses and bonds can expire and can be cancelled, homeowners should always check such information for themselves.To find more licensing information for your state, visit our Find Licensing Requirements page.
General Information
Free Estimates
Ask for Details
Eco-Friendly Accreditations
No
Payment Options
Check
Senior Discount
No
Warranties
Ask for details

Anderson Building & Restoration is currently rated 4.6 overall out of 5.

No, Anderson Building & Restoration does not offer eco-friendly accreditations.

No, Anderson Building & Restoration does not offer a senior discount.

No, Anderson Building & Restoration does not offer warranties.