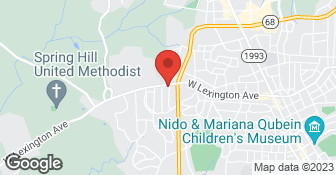 We have 17 years experience. We do the best repairs for my customers and do high quality work. We remove stone retaining walls and we reset it back. We Repair brick side walks, water-proof foundations and repair stone walls. Give us a call today Free quot 336-762-2193 or 3367622775...

Excellent. Lorenzo did a beautiful job on brick work, and repairing cracks in my fireplace.

Description of Work
Repair of brick work on front porch.

The service was in a timely manner. They were professional and clean up really good at an affordable price. I like the appearance of the completed work and how fast they were. I would use the service again.

The mortar on my house had deteriorated significantly and animals had used that as an entry point to my house. Lorenzo and his team re-did the mortar on the front of my house on some stone work. I no longer have squirrels getting into the attic and the front entry way looks better than new. I am definitely going to use Lorenzo to finish other areas of my house.

Description of Work
Re-mortar the front stone of my house

And so, I went to Angie's List and found Lorenzo Hernandez Masonry. I chose him because his Grandview location is close to my Lee's Summit home and I also chose him, most importantly, because of his "A" Grade with Angie’s List. Lorenzo returned my call in just a few minutes and within 15-minutes he was on my property and giving me an estimate! WOW! I had a budgeted number in mind as to about what I thought the cost would be and after Lorenzo sized-up the job, his estimate was exactly in-line with what I was thinking. Additionally, I wanted Lorenzo to replace the particle backing board that the brick goes against, with a better grade of plywood and with that additional work, we agreed on the price of $1,200.00. Lorenzo said that he would look for materials later that day and he would be back the next morning around 10am to start work. I need to emphasize that this was not just a matter of Lorenzo buying materials. HE HAD TO FIND BRICK THAT WOULD MATCH THE OTHER EXISTING BRICK ON MY HOME! Not an easy feat if you were to see the unique brick that he had to match but worry not, this was just another step that Lorenzo excelled at! Brick was as good of a match as what I could ever expect, and I am not easy to please either. Lorenzo showed up with a helper at the time he said the next morning and the work commenced. I could see a very organized plan developing as they unloaded the various construction equipment that was going to be needed to do this job. Work continued at a steady pace and I could see great workmanship happening from the time the first bag of brick mortar was being mixed up. A job very well done was wrapped up in the mid-afternoon and then I watched as they loaded up all of their equipment that had been used in this project and next I witnessed them spending at least the next ½ hour doing a very detailed clean-up and sweep. By 4pm, Lorenz and his helper were in their truck and driving away. I couldn’t even tell that they had been there because they cleaned-up so well! The only thing that Lorenzo left behind was an example of superb craftmanship with the newly constructed brick column in between my 2 garage doors! I am so pleased and go out to my driveway sometimes just to look at it and marvel that this project was completed so well. Super job and top marks to Lorenzo Hernandez Masonry! He WILL NOT disappoint.

Description of Work
n the front of our 2-car garage, the exterior brick covering between the 2 garage doors had been knocked down from when I accidently backed into it several months ago. I obviously needed to get it re-built but was scared of who I might find to do it in fear of a bad workmanship job.

Description of Work
All services were performed and completed as promised Stonework is now stable, attractive and protective Very good masonry work.

Mr Hernandez came out and gave me an approximate total estimate on paper for replacing my driveway. When we talked later I told him he had the bid, and when could we get started. He said he would come out and talk about it on Monday. I got a call on Monday and he said we didn't need to talk about it, he would just come out the following Monday and sign papers, so he would get started on the project. On the following Monday he called and said we could sign the papers later. He would have someone out to start tearing out my driveway on Tuesday and I should give that person a check for $1000. I said and quot;and this is all part of the original estimate?and quot; He said and quot;oh no. That is not in the estimate I gave youand quot;. I said and quot;what about the price for the cement.and quot; Gee that wasn't figured in either. The price he quoted had now almost doubled. He bid $4000 and it was now going to cost me $7000. He said the estimate was just for his labor cost. I told him he told me that his estimate was the total for everything. I told him to forget it. Fifteen minutes later he called me. He said if I get a bid under $7000, for everything to call him and he would beat it. I told him to not call me back again. I would not use Mr. Hernandez now even if he went back to his original estimate.

The front stoop looks amazing! The front walkway looked really good at first but after 5 months it started settling again. This caused additional cracking and pulling of the brick from the concrete. I called Lorenzo and he came out within the hour. He agreed to fix it that week at no additional charge. Our settling problem is a bigger issue due to the original concrete not being laid properly but Lorenzo was super great about doing another patch for us.

Description of Work
We had significant settling on our front concrete walkway. Lorenzo came out to repair our front walkway cracks and mortared the brick edging. He also rebuilt our front stoop.

Got a written estimate from Mr. Hernandez in May where he stated repair $700, replace $2200, includes tear out and clean up. Saved up money to do replacement and called him in August. When Mr. Hernandez came back he stated he could do it for no less than $2800. I went in the house and got the written estimate to show him. He looked at it and said he could never do it for that amount, that the $2200 must have been for repair only and even then did not include tear out and clean up. I showed him where it said repair $700 and replace $2200. He stated that it was not detailed and even went so far as to say that I misunderstood him because I'm a woman. He also said he could not get brick that matches what we have and would never have said he could repair it for that reason. When I told him I had bought brick that matches from KC Brick, he said they are out of business and we could never match that brick again. However, in May, he had said he could easily match the brick and do a repair or a replacement. When we told him, thank you we would go with someone else, he changed his tune and said he could then do a replacement for $2400. We said no thank you and walked in the house. He then called 8 times the next day leaving messages that he had already ordered the brick and materials and that we would owe him money, even though all we got was a free written estimate. His original estimate seems fair compared to other people who gave free estimates.

Mr. Hernandez, is a hard working professional with over 15 years experience who provides absolute customer service from start to finish. He aims is to satisfy his clientele with efficient and quality workmanship. I highly recommend him to do any brick/stone masonry repairs!

Description of Work
Mr. Hernandez reset brick masonry trim around my patio that had sunken down. He explained what he planned to do to fix the alignment & leveling of the brick trim to be level & even with my concrete patio. The completed job looks wonderful, like new again!