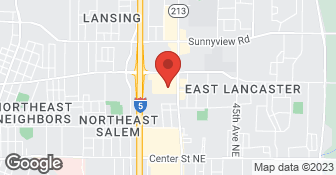 Peter Herman Carpet Cleaning has been in business since 1995 in the Salem communities. We are a family owned company and pride ourselves on providing the highest level of professionalism and quality services to our clients. We have built the success of our company on repeat customers, referrals and communication to meet individual needs. Peter, the owner, is conscientiousness, thorough and focuses on attention to detail. He is reliable and offers quality work at a fair price. Thank you for considering Peter Herman Carpet Cleaning and we look forward to impressing you! ...

They did a great job cleaning the carpet in the bathroom and the hallway. They were helpful and polite. This was a 2 day process. They were on time both days.

Peter Herman is simply the best, at a steep price. I gave him an A on price due to the fact we get such high quality. This is the third time we used him. The first time was twelve years ago to get a house ready to sell. The second was about six years ago when my kids trashed my carpets and also tried painting their rooms but of course spilled large quantities of bright paint. The third time was this week since we are selling our current house and we had trashed carpets again from our kids, though in one small area the carpets were stained dark from me always running from outside into my office/den. The carpets look so good the new owners will not need to replace them. I have used one other carpet cleaning service which I recommended since they do a good job for a fraction of the price, and if your carpets are in good shape and you simply want to make them perfect, I would use them. But if you want to work a miracle, call Peter Herman. btw- I should warn you that his equipment is not very powerful and leaves a lot of moisture behind, though is also partially due to the number of passes he makes over trashed carpets.

I was moving into a new home, and I wanted the carpets fresh, and he did an excellent job with my carpets. He worked without much notice and also worked over the weekend to get it done on time. I did not choose him based on the price; I could have gotten a less expensive provider, but I had excellent service from him. I would use him again in the future if necessary.

I have used Peter's services for years. He's very thorough (much more than I'd be, and I'm pretty thorough!). We usually have him clean our carpets twice a year, but hadn't for a few years due to health issues. Our light-colored carpet was very dirty. Peter worked from 9am til 4pm before the carpets were cleaned and brushed to his satisfaction. In the past, he's shown the same detail cleaning furniture. He's not only a very nice person, but he's so trustworthy that I can leave a signed check for him to complete when he's done. He gets the check and I get an invoice and clean carpets!

Description of Work
Peter cleaned all the walkways in our home, and set up fans to dry the carpets.

Root Cleaning Solutions is quickly becoming a reputable and well-known company with over 25 years of experience in the industry. Specializing in Hardwood Cleaning & Rejuvenation, Carpet Cleaning, Tile & Grout Cleaning and Sealing, Stain & Spot Removal, Odor Removal and more. With a focus on providing knowledgeable, friendly and efficient service we aim to go above and beyond with every client. Our team is up for every job, managing projects with the skill and experience our clients have come to expect. We want our customers to be satisfied with our work, which is why we stand by our service, product, knowledge and will provide a 100% satisfaction guarantee with every job we complete. We use an all-natural plant-based encapsulation technology combined with an advanced Rotowash cleaning system to provide a world class proven clean others simply cannot replicate. Root Cleaning Solutions is a dedicated and loyal member of our community, working in conjunction with local charities and organizations to give back to the ones we share this community with. If you have a local charity that you would like recognized or would like to nominate to be part of our yearly charitable giving, please let us know! We will donate a portion of our yearly proceeds to 4 of our client nominated charities annually. Welcome to the Root Family! ​ Sincerely, -Root Cleaning-  …

We are a family owned residential and commercial carpet cleaning business. We believe that carpet cleaning should be affordable for everyone. That is why we make it our goal to match or beat any competitors quotes. Be believe that excellent service doesn’t have to break the bank. Give us a call for your free in person or over the phone via text quote.  …

Peter Herman Carpet Cleaning is currently rated 5 overall out of 5.

No, Peter Herman Carpet Cleaning does not offer warranties.