Aire Serv of the Willamette 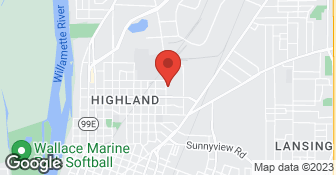 Aire Serv Heating and Air Conditioning, serving the Greater Portland Metro, including the Greater Salem, Albany, and Corvallis areas, never charges overtime, we offer financing for general repairs up to new heating and cooling products. We have won Angie's List's Super Service Award 2010, 2011, 2012, 2013, 2015, & 2016. Our technicians are well trained on everything from the latest technology to old school products. We have same day service available and same & next day installation of central heating and cooling systems at no additional cost. We will not charge you the diagnostic or trip charge to come out to your home or office with any repair. Please ask when you call or one of our technicians how to get 15% off your service call. Award winning. Additional DBA - A Team Heating & Cooling LLC. OR Lic#188791...

Excellent! Jose did a professional, thorough job of cleaning, testing and offering recommendations.

This was classic bait and switch tactics. In the middle of a heat wave I called to get the AC unit serviced. Over the phone I was quoted $89 plus whatever parts would be necessary. When the tech arrived the problem was diagnosed in 5 minutes as a faulty capacitor - a part I later discover is quite inexpensive at less than $40. 5 minutes later the unit was working but the invoice was $450 - which is a whopping 300% MORE than a typical capacitor replacement. Of course not being an expert I didn’t realize I was grossly overcharged till after the fact and doing my own research. When confronted with this the owner responded with indifference. Highly unethical and horrible customer service. DO NOT USE THESE PEOPLE!

Worst experience ever! The two contractors Aire Serv sent to my home to do the needed work were unprofessional, did shoddy work, and one of them complained very loudly the entire time he was in the crawlspace. After the work was done, they said they were late for their next appointment and took off quickly before I even had a chance to check their work. One of the new vents was installed very crooked. It looked like crap! While examining the rest of their work, I found the ducting was coming apart because they were installed incorrectly. They also left a pile of trash in the crawlspace and left a crumpled sheet of paper in one of the vents. Their **** job cost me over $1,800. I sent Aire Serv a letter demanding they fix their mistakes free of further charge to me. They refused to cooperate so I had to hire another contractor to redo all of Aire Serv's ****** work for an additional $1,000.

Description of Work
Two new air duct runs and vents, replace all old boots from each vent and seal them.

Initial heater was installed and I was happy with the work. However, upon recent inspection a water leak was found in my heater and what the technician called a code violation by another office within the Airserv franchise chain. This technician told me I needed to contact the Willamette office to see if they would honor the installation warranty, then I was told by the Willamette office that they cannot do work in my area any more, so they cannot help me. So now I am facing a $450 repair bill on a fairly new furnance due to a possible installation issue, and the people that installed it can't come to my house any more? This is bizarre and should give anyone looking to buy a new heater pause before working with this company.

Description of Work
Had a heater replaced

I used Airserve for a new construction build project. It was a residential, two story house. We decided on a two zone system and paid to upgrade the system in order to accommodate the two zones (additional dampers, controls and a variable speed furnace). A small upstairs and a large downstairs made balancing the two zones a bit of a challenge. As a result the installer decided to plug the downstairs master bedroom and master bath into the upstairs zone. You can probably imagine why this might be problematic. The vary reason people install a different zone on different floors is because warm air rises and the two floors need to be treated differently. When I called the report the issue it took several attempts to get a call back. I finally was connected to Jim the general manager. The guy was a total *****. He was condescending, arrogant and didnt offer any help at all. He had zero remorse and was completely defensive the entire time. He said I was asking for "more additional comfort" "add ons and extras" and so that would require me paying addition money. As a result, I decided to ask a couple other HVAC companies to come out and have a look at the situation. Both told me they had been with their companies for 10+ years and had never seen an upstairs zone be directed to a downstairs bedroom. They both understood the challenges of a small upstairs and a large downstairs but said there is an easy work around that they do all the time (size the bypass damper properly). They also both had a fix that was was relatively straight forward. I would never use airserve again. I would recommend looking at some other companies. Both Santiam Heating and Sheetmetal and also Focus Heating and construction are much better. Sometimes I read negative reviews and imagine the person writing them is the type to complain about everything. If my order gets messed up at a restaurant, Ill just eat it anyways. I avoid confrontation at all cost. I care about people and try to give them the benefit of the doubt. In this case I really feel like they messed up. Mess ups happen, I understand. I just wanted them to offer a reasonable solution to help fix it. I would have been happy with an apology and splitting the cost of getting the issue fixed (they quoted me $1200 for the fix).

We were very pleased with their professionalism and follow up. We would recommend them.

Description of Work
They installed furnace.

They did a a good job and they were pretty thorough. I would hire them again.

Description of Work
They did a furnace tune up.

Went fine. Not sure what happen, there might have been aI car accident on the road but they arrived 40 minutes after the window they gave.

Description of Work
HVAC Tune UP

They were punctual for initial 'diagnosis and repair' but unfortunately they seem to be incapable or unwilling to figure out the underlying cause of things, and more than willing to accept nearly $2500 for a 3 week "fix". I was told the electrostatic air filters were not well maintained which impeded air flow and allowed condensation to build up leading to water dripping onto the power head and shorting it. This made sense, I paid the to replace the power head, charging field and cleaned filter cells. 3 weeks later. Heat pump/furnace again stopped. Water again accumulating. They sent a service technician the following day. I am out of town and received no phone call regarding their assessment, just another invoice with a somewhat cryptic and very poorly written explanation with absolutely nobody available to talk to about it until Tuesday (after the holiday weekend). I will copy an paste their explanation here. "Found five amp low-voltage fuse blown again and water on floor. Checked thermostat found thermostat was set to 66° and calling for cooling customer set thermostat to 68° on average which of these temperatures can potentially cause the system to freeze up and do damage. Recommend leaving thermostat to 70 or above for cooling or have low ambient kit installed on system to prevent coil Freeze up. Refrigerant temperatures and yeah yeah yeah pressures are normal left EAC unplugged suggest leaving unplugged for several days to dry out it does appear to still be operational." So in short it seems they misdiagnosed the cause for water build up which lead to the initial short circuit and $2500 replacement. I went forth with a costly repair based on the information provided to me as I was told the water build up was due to lack of maintenance and not having filter cells regularly cleaned. Now filter cells are all clean and after 3 weeks we have the same problem. I have paid that money and apparently cannot turn thermostat below 68 degrees unless I have a low ambient kit installed, and who knows how much money they will want for that. I called them within 30 minutes of receiving the invoice, first could not get past the call center, then eventually forwarded my contact to the on call technician. Received a call from them shortly thereafter but he was very rude and essentially seemed to be blaming me for talking to the "wrong guy", since "I'm just the on call technician". Ultimately he had no information to offer me regarding the work done at my house earlier that morning and eventually hung up on me. Unless they are able to remedy this situation I will be talking with my credit card company about this fraudulent charge.

Frequently Asked Questions & Answers about Aire Serv of the Willamette

How is Aire Serv of the Willamette overall rated?

Aire Serv of the Willamette is currently rated 4.6 overall out of 5.

What days are Aire Serv of the Willamette open?

Aire Serv of the Willamette is open:

What payment options does Aire Serv of the Willamette provide

Does Aire Serv of the Willamette offer free estimates?

Does Aire Serv of the Willamette offer eco-friendly accreditations?

Does Aire Serv of the Willamette offer a senior discount?

Yes, Aire Serv of the Willamette offers a 15% senior discount.

Does Aire Serv of the Willamette offer emergency services?

Are warranties offered by Aire Serv of the Willamette ?

No, Aire Serv of the Willamette does not offer warranties.

What services does Aire Serv of the Willamette offer?

Are there any services Aire Serv of the Willamette does not offer?