Protect Yourself From Air Conditioning Scams

Follow this advice to avoid getting ripped off by shady HVAC contractors.

Heating and air conditioning systems play a crucial role in any home, and HVAC failures can lead to serious and expensive problems.

Since most homeowners aren’t familiar with the ins and outs of their home’s HVAC system, they tend to rely on their service provider’s expertise and honesty. But an HVAC blowout, especially during a bitter winter or sweltering summer, can drive people to make snap decisions and become more vulnerable to unscrupulous sales tactics or outright scams.

• Get a written estimate.

• Check for licensing and workmans' compensation and liability insurance.

• Make sure the contractor has an established local, physical address.

• Verify them with Angi, your contractor board and department of consumer protection.

• Ask them to give you the old parts after they've been replaced.

• Be skeptical of contractors who pressure you to do expensive work right away.

• Trust your gut; if it feels wrong, don't hesitate to get a second opinion.

HVAC contractors and experts in the field advise homeowners to do their homework on contractors, resist pressure to do major work right away, and consider a second opinion on big-ticket items. Rob McClintock, owner of McClintock Heating Cooling & Electrical in Matthews, North Carolina, says homeowners often call him for second opinions, and he frequently finds that their system requires much less expensive repairs than originally suggested.

“The best way to police this is to seek out a second opinion on anything major,” McClintock says. “It may be an innocent oversight, or it may be a scam trying to sell you on an expensive repair. We do a lot of second opinions. Many reputable contractors will do that to help the homeowners and police the industry.”

He advises homeowners to react skeptically to low prices with a time limit attached. “Be suspicious of any tactic to compel a homeowner to buy right now or lose the savings on the price,” he says. “If they say you’ll save this much if you buy right now and it’ll be more if they have to come back out, I think the most reputable contractors won’t do that. It forces a homeowner into making a purchase they haven’t fully thought out or researched, so stay away from those.”

June Kasidonis, owner and vice president of sales and marketing for Kasidonis Heating & Cooling in Brunswick, Ohio, says nothing beats establishing a relationship with a trusted HVAC contractor.

“You want to make sure you know not only the product but who’s putting it in for you,” Kasidonis says. “A lot of times people will go for the lower price, but the person putting it in might be one guy working out of his home, and when the weather gets bad and you have some issues, you try to call and they won’t answer. You can’t reach them, and now you have no warranty.”

She says trustworthy contractors arm their clients with as much information as possible. “A good contractor will show you what they’re talking about,” she says. “They educate the customer and prove to them why they need to do the work. Always ask them what it would cost to repair versus replace, and know if you have enough information to make a good decision.”

Corey Malone, president of Air Comfort Service in St. Louis, Missouri, recommends homeowners insist on getting a detailed written quote from a contractor. “That’s the biggest thing, and that’s where a lot of problems develop,” he says. “Don’t ever allow a company to dismantle equipment without telling you why, and make sure they tell you in detail what you’re paying for and why. There should be no surprises.”

RELATED: Do I Really Need that HVAC Upgrade?

Malone also expresses little patience for technicians who oversell the nature of their repairs. “I’ve heard cases where a contractor walked up from the basement and told the client, ‘You had a crack in your heat exchanger, and I just saved your life,’” he says. “That’s a scare tactic, and that’s not the way to go about doing business.”

McClintock, likewise, advises homeowners to trust their gut when contractors play to serious fears. “If they use scare tactics, like urgent appeals to the safety of your family or property, always get advice or a second opinion,” he says. “Don’t dismiss them, because they may actually be true, but if you think something’s wrong with your system, discontinue use until you verify with a second or even third opinion.”

Malone says HVAC service plans can offer great value, provided you sign one with a trustworthy contractor. “I have some customers who have had maintenance agreements with us since the 1970s,” he says. “It’s a great way to find little things to keep the repairs down. You might have a $20 component that’s testing bad, and if it goes out, you would lose a compressor.”

Also, look for an HVAC contractor who’s good about contacting you when maintenance is due, he says. “The good ones will be proactive to let you know, and if they’re not, I’d look for another contractor,” Malone says. “You paid for the service and you deserve it.”

Good maintenance providers also deliver detailed documentation, he says. “If the service ticket when they’re done just says, ‘performed maintenance,’ that’s not enough,” he says. “What were your air pressures? Gas pressure? Electrical draws? This is specific work that you can verify if it was done."

McClintock also says homeowners should pay close attention to what the HVAC company introduces into your system, and avoid pitches to add performance-improving products. “Refrigerant additives, leak-stops and things like that, can be very devastating to a refrigerator system,” he says. “Many of these things aren’t manufacturer approved.”

Kasidonis says she frequently hears about problems with incorrect refrigerant levels, especially in older systems using R-22 refrigerant. “Quite a few techs don’t know how to measure it accurately, and they undercharge or overcharge the system,” she says. “They might not intentionally do it, but some of the techs aren’t knowledgeable. I do know some shady companies are working with R-22 out there, so be careful when you’re dealing with it.”

To ensure the best chance of hiring a quality service company, homeowners should check and double check that their HVAC contractors are licensed, bonded and insured. And although it’s not a requirement and doesn’t necessarily provide evidence of a good contractor, certification through a nationally recognized group, such as North American Technician Excellence, shows the technicians have passed certain levels of training and qualification.

“When I’m bringing a contractor into my home, I consider it a privilege I’m extending to them,” Malone says. “A lot of little signs add up to show if they’re reputable or not.

“I look for local license plates and a marked truck, especially if it’s a service van,” he says. “There needs to be something on there that ties them back to a legitimate business. An email address that just goes back to a generic Yahoo-type site will make me wonder. Some smaller companies have that, and they do fine, but when I see that kind of email address I take a close look at their website to see how long they’ve been in business.”

He keeps an eye out for high-dollar recommendations, especially on newer equipment. “We tell our customers that a properly maintained A/C or furnace should last 12 to 15 years,” he says. “If your company is telling you a 5-year-old piece of equipment needs a major repair, that’s not typically the best thing for the customer. There may be a warranty repair or a simple fix they’re not being alerted to.”

McClintock also advises steering clear of air duct cleaners who offer suspiciously low prices. “You get what you pay for,” he says. “An ad for whole-house duct cleaning for $59 isn’t going to get your ducts cleaned. It takes several hours to do that job right, and that’s not going to cover their charges.”

Excessively low prices can be bait-and-switch schemes to get in the door and tack on several hundred dollars of extra services or pressure you into major replacement work you might not need. “Scams come in all shapes, forms and sizes,” McClintock says. “Just buyer beware.”

Have you been pressured into A/C work you don't think you needed? Tell us about your experience below.

Editor's note: This is an updated version of an article originally published on June 25, 2014. 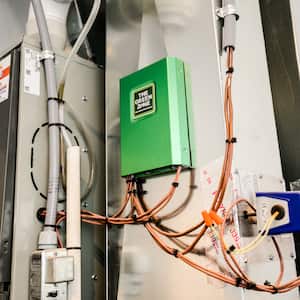 How Much is that “Bargain” HVAC Repair Costing You?

When it comes to home repairs like HVAC and plumbing work, saving a few dollars on the initial repair can have costly implications down the road.