You're allowed to raise a stink about a foul-smelling disposal

When learning how to clean a smelly garbage disposal, take a moment to remember that you're dealing with electricity, water, and sharp blades. Disconnect your garbage disposal from its power source before inspection or the manual removal of debris. You do not want the machine accidentally flipping on while doing either of these. You can do this by unplugging the disposal underneath your sink or flipping the appropriate breaker switch. Be sure to test it to make sure your disposal is really off.

Also, be sure to wear protective gloves when handling natural or store-bought cleaning supplies, as well as any grimy bits that are making your garbage disposal stink.

The rubber strainer at the top of your garbage disposal drain—often called the splash guard or the baffle—can keep debris, smells, and noise from filling your kitchen. It does, however, have the habit of getting dirty.

After disconnecting the disposal from power and putting on those gloves, pull the splash guard toward you to remove it. Scrub the guard with soap and water or let it soak in a white vinegar and water solution.

Similar to the curve in the pipe under any sink, your garbage disposal will have a curved trap underneath the disposal that catches debris and controls the movement of sewer gasses.

Place a bucket underneath the curved pipe and don your gloves. You should be able to unscrew the release on either side of the pipe by hand, though some models require pliers. Inspect the inside of the pipe and flush it with water to ensure no food or grease buildup is causing the smell. 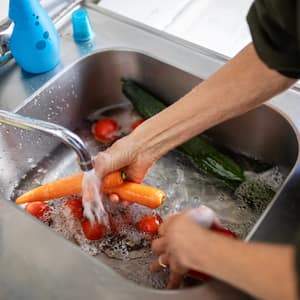 Garbage Disposal Jammed? Here's How to Fix It

There is always a chance that a small piece of food or debris will become stuck right at the entrance of your disposal, and that can lead to a bad smell in your garbage disposal. After removing the splash guard, shine a flashlight into the top section of the pipe to inspect for trapped food. Again, never, ever stick your hand into the disposal to remove food, even with the power turned off. Use a pair of tweezers or needle-nose pliers to fish out the culprit.

5. Clean With Baking Soda and Vinegar

Garbage disposal smells may be as simple as a slow and steady buildup of grease in the pipes and related parts. Neutralize the grease by sprinkling a half cup of baking soda down the drain, letting it sit for 30 minutes, and then pouring a cup of white or apple cider vinegar down the drain. Let this mixture sit for another 15 minutes, and then rinse with cool water.

Borax works similarly to baking soda by breaking down odors and tricky debris like layers of oil and grease. Pour a quarter of a cup of borax into the drain and let it sit for up to an hour. Rinse the drain with cool water to remove the remaining borax.

A quick ice bath is a great way to clear food debris away from your blades and sharpen them a bit as well. Add 1 cup of ice, a half cup of salt, and several lemon wedges to the drain and turn it on. Remember to turn the water on as well. Let it run until all the items are clear from the blades, and repeat once if necessary.

If you opt for commercial garbage disposal cleaners, take a look at your user manual first. Some cleaners—such as improperly diluted bleach—can corrode the parts of your disposal and drain pipes over time. However, there are also cleaners specific to your garbage disposal that can flush out grease and other potent problems.

9. Check Your Motor and Blades

A garbage disposal that smells more often than not could be a sign of a larger issue. Dull blades or a dying motor may not be properly breaking down the food through the drain, leaving you with frequent leftovers that lead to smells. We recommend calling a local garbage disposal repair team to analyze the more complex parts of your system and help you decide if you need to repair or replace the disposal. 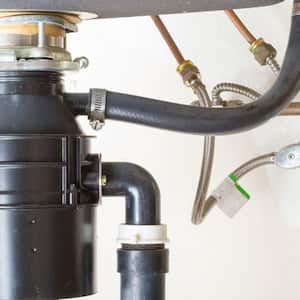 How Much Does Garbage Disposal Replacement Cost?

The cost to replace a garbage disposal starts at $150 and depends on factors like materials, size, and labor

Steer clear of bad smells by maintaining your garbage disposal with good habits. Only put food down the drain and try not to send too many things down at the same time. Avoid highly fibrous foods and run cool water to encourage it all to flush through the drain. Always head back to your user manual for tips on how to clean your disposal, replace parts, and troubleshoot common issues.