Ghost flushing doesn't mean your house is haunted, but it does mean you should check your toilet for a few different issues

Despite its name, ghosts are typically not the ones behind ghost flushing. The term “ghost flushing” refers to when your toilet flushes on its own, even if no one has used it recently. There are several reasons why this could occur, but the main reason ghost flushing happens is a leak somewhere in your toilet.

External leaks cause water to come out of the toilet. This situation can occur in the tank, the bowl, or even the pipes connecting the toilet to your sewage system. All of these can cause ghost flushing, so narrowing down where the leak is coming from can help you implement a fix.

Crack on the Exterior of the Bowl

These types of cracks are often noticeable and can spring up at any time, although cracks closer to the seat are usually harder to spot. Typically, the first sign of a leaking bowl is if the toilet seems like it’s just run a marathon and is “sweating.”

For external cracks such as these, you’re typically better off replacing the entire toilet, as patching it up is only ever considered a temporary solution. The rest of the toilet is also now at risk of cracking, so you may just have to deal with this problem again soon.

Crack on the Exterior of the Tank

Cracking on the exterior of the toilet tank tends to be more common than on the bowl. This damage tends to happen if someone knocks the toilet into the back of the wall. You might be in for a twofer if you crack both the toilet and the wall in the process.

For tank cracks, you could try lowering the water in the tank if the crack is higher up. Adjust it using the knob that controls the water level, typically located next to the fill valve. Remember to adjust the height of the toilet water once you’ve patched up the crack.

If the crack is too low, it’s best to replace the toilet.

Loose piping can occur if the seals between the toilet and the sewer system weaken. These types of leaks typically require replacing the seal or the piping. If problems continue to happen, you may be dealing with a water pressure issue or trouble with the toilet fitting itself.

Call in a local plumbing repair company to address this situation. Improperly removing a water shutoff valve can cause flooding and quickly turn your bathroom into a seaside resort.

Internal leaking tends to be the bigger culprit of ghost flushing. Toilets have many moving parts that go through continuous wear and tear. This use can lead to one part failing, which causes another part to fail, and then you need to replace the entire internal system of your toilet.

So if you notice any of the signs below, tackle the issue ASAP.

A broken toilet flapper tends to be one of the most common reasons for ghost flushing. Typically, the flapper no longer creates a seal over the drain, so water continuously fills the bowl until causing it to flush, preventing it from overflowing.

Simply replacing the flapper normally fixes the problem. But if the situation arises again, there may be an issue with the toilet handle pulling and warping the flapper. In this case, it’s best to replace the handle instead.

The refill tube is responsible for refilling the tank itself rather than the toilet bowl. Sometimes, if the refill tube is pushed too low, it can constantly shuttle water into the tank, which then overflows into the bowl, causing ghost flushing.

To determine if this is the part responsible for running up your water bill, you’ll want to remove the refill tube from the overflow pipe and leave it outside the overflow pipe. From there, try flushing and leaving it. This simple trick works fairly well, but you should still call in a plumber to find a permanent solution.

The flush valve is the piece responsible for flushing the toilet into the sewer system. A busted flush valve can cause constant flushing because the system believes the handle is being pulled constantly. The only solution in this instance is to replace the entire flush valve.

A toilet flange failing tends to look like an external leak but is actually an internal piece issue. This piece is located on the bottom of the toilet and connects the toilet to the main drain pipe.

Because this often requires moving an entire toilet onto its side, you’ll want to call in a plumber for this job. The average cost of replacing a toilet flange is around $155.

If the toilet flange is in working order and there are no other external leaks, then you might be looking at a floor leak. This leak may cause the toilet to constantly drain water and cause ghost flushing. Shut off the water supply to your home and call an emergency plumber.

How can you test for leaks?

To test for leaks, use water coloring in the water tank and see if the water slips into the bowl from the tank. This test will indicate if there’s a problem with the flapper or refill tube.

Why is my toilet gurgling?

Gurgling water tends to sound like ghost flushing from time to time. Your toilet may be gurgling because of a blockage in the pipes. 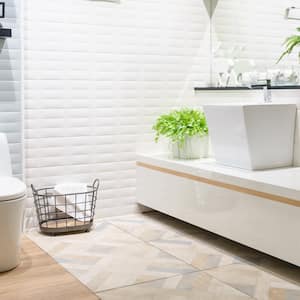 Because you can only pull out the plunger so many times