How to Clean a Shower Head

Who doesn’t like a hot steamy shower? Make sure the water is coming at you full force by cleaning the shower head every so often. Here’s how.

When it comes to house cleaning, the shower head is an often-neglected piece of bathroom hardware that needs a little TLC every once and awhile.

Signs you need to clean your shower head

Have you noticed that the spray is a bit uneven? Most likely it’s due to mineral buildup clogging the tiny holes in the shower head.

“There’s water that stays in it, and on the inside you get a buildup of hard water and mildew,” says Abe Gal, co-owner of highly rated Superior Home Cleaning in Orlando, Florida. “The water pressure comes out lower.”

You can fix the problem by knowing how to clean a shower head.

Gal recommends disconnecting the shower head and soaking it in a bowl of white distilled vinegar overnight. Depending on your municipality’s water supply, this should be done every one to three months — the harder the water, the more often the shower head should be cleaned.

Be careful not to put too much pressure on the shower arm when you remove the head or you could break it. Because the arm typically runs behind the wall, that repair would like require the services of a plumber.

If there are still stubborn deposits that resist dissolving in the vinegar, use an old toothbrush to give the shower head a scrub before reattaching it.

Another option is to use a toothpick to gently remove any remaining debris. If necessary, replace the Teflon tape on the shower arm before reattaching the head to ensure a tight seal.

If all else fails, consider replacing the shower head with a new one. 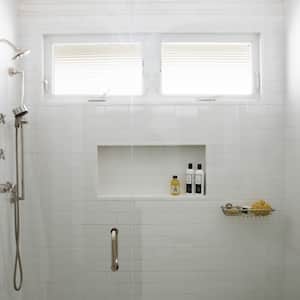 How to Pick the Best Showerhead

The right showerhead can make showering your new favorite hobby

Editor's note: This is an updated version of an article originally published on Dec. 10, 2014.

Need someone to do your most-dreaded chores — like cleaning the bathroom — for you? Log in to Angie's List today to find highly rated house cleaning service.