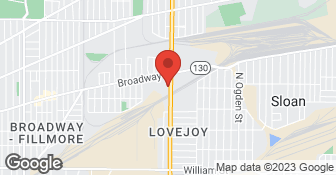 Work began in April 2017. The old garage was demolished and then a new garage was built. I was told that there would be hairline cracks on my driveway from the equipment they would be using. That turned out to be true except one block of concrete had more than hairline cracks, it was seriously cracked. Shortly after the garage was completed a hairline crack almost across the width of the garage floor developed (see pictures). When I questioned Ed, the owner, he told me nothing could be done about either damage. Now it is December, 6 months after the garage was completed and a piece of siding came off the garage (see picture). On December 8th I called and requested that someone come out to replace the siding. No one answered my request. I eventually put the piece of siding back up as best I could but I was unable to secure it. On December 19th I sent an email to complain and ask that someone come and secure the siding. Now it is December 28th and I have not heard from anyone from Atlantic Garages.

Work was not done.

I highly recommend Atlantic Garages. Ed, the owner, was involved in every step. He was extremely knowledgeable and easy to work with. The price was fair. I was impressed by the quality of work. He has very experienced guys working for him. It was done in a timely manner.

Great team! Prompt and efficient. Complete construction in one day!

Never showed up to perform work. Kept stringing me along all summer and fall until it was too late to do work. Have contracted with someone else

Description of Work
Did not perform work

Good crew didn't have any problems

It did not go well. We signed the contract in mid April 2014 but it took until the end of August for the contractor to obtain a permit. Two more months elapsed before they poured the concrete slab for the garage floor, citing the weather and failure of sub contractors to honor start dates etc. The garage itself was built about a week later immediately before the November storm. In early December the owner called and demanded full payment of the balance although the final inspection had not taken place. Other than his visit to provide an estimate and look at the job, this was the only other time I had actually spoken with the owner, although I had requested to do so numerous times. I did ask for written assurance that Atlantic would take care of any loose ends that arose when the inspection took place. The owner emailed me that he would address any such issues as soon as possible. When the town building inspector emailed Atlantic on 01/09/15 to question two items that were not constructed in keeping with the original plans submitted, they did not respond. The office assistant told me it was "nothing critical" and in the spring they would return to take care of them. I have texted and called approximately 5 times between mid March and mid April 2015 and they have not honored this commitment. I even called and said I would file formal complaints if I did not hear from them in a couple days. Still not a word. They have their money and obviously have no further interest in the job. They initially only put one window in the garage although we had ordered for and paid for two. They poured a concrete pad in front of the garage that is already crumbling. There is a broken piece of siding that was put up on the side of the garage facing the house. Not exactly what you hope for with new construction. It would seem that the crew was sent out that day at the very end of the season without reviewing the plans and paying no attention to details that differed from any standard garage. The town building inspector will not sign off on the final inspection and issue a certificate of occupancy. This is what sets one contractor apart from another. If you want true quality workmanship, an open line of communication, and a businessman who treats ALL customers fairly and ethically particularly when difficulties arise, this is not the company for you. Their website assures the customer they will take care of everything, but in our experience they did not .

Description of Work
Atlantic built a 2 car detached garage for a rental property adjacent to our home.

It went very smoothly. Built a quality garage and am very satisfied with their work.

Price was right. Product was delivered on-time. Shortly after installation, one of the side windows broke because the side door slammed too hard. Atlantic Garage came back and replaced the window at no charge. Wonderful, quick work.

Description of Work
Build to wonderful Steel-sided garage, 20x22, with 2 overhead doors, 3 windows and solid concrete foundation, gutters, and cleared away all debris.

The finished garage is beautiful, adds value to our home, convenient storage and has made winter mush easier to manage.

Description of Work
We had an excellent experience from start to finish working with Atlantic Garages. Ed (the owner and contactor) came to our house for an estimate to build a 16x28 garage with 6 foot covered region. He had some great suggestions on how we could use the space and light more efficiently, where we could save money, and maximize materials. The concrete installation started early in the morning and was done before we got home from work. After the concrete cured for a week, they were back to begin construction of the garage. The gentlemen were polite and friendly (especially when our dog wanted to say hello). They worked non-stop throughout the day. Within three days, our garage was finished. We've been very pleased with our garage. Other reviewers mentioned that there were nails left behind, and this was true. But after a few strolls around the garage, we had a few pounds of nails to add to our collection. It's a construction project, nails are expected.

Was very happy with the way everything went. Price we agreed on in the beginning was what we paid. Only extra cost was the removal and disposed of 2 tree stumps, which we expected. Will admit he doesn't return phone calls very well, but eventually he does get back to you. The only other problem I had, was when they finished building my garage, clean up was not done very well. Probably found 3 solo cups of nails. The owner also owns a concrete business, waiting for a date to have our driveway done.

Description of Work
Started job on 5/5/2012, demolished old garage. Came back a week later to form concrete pad, was back Monday to pour concrete. Came back on 5/18/2012 to build new garage, was finished at 2:30p.m. that day. Garage door was installed on 5/23/12. As far as I know the inspector came that Friday. Haven't heard about any issues either way.

Spend your money somewhere else!!! I don't have enough time or room to tell you why you should go somewhere else. First of all the low price disappears when the owner nickels and dimes you to death. Every time he came out it's a hundred more for this and a hundred more for that! I understand a price can creep up but not everytime they visit. He should mention things up front. Then we agreed on a start date and he moved it 3 times because he was busy with other jobs! The start date came and went and he never called me, I had to call HIM! Seriously? Then they damages a bedroom on the inside of the house and claimed they only do work on the outside...the damage inside is my problem! But the WORSE part is they still had to finish a trim piece because they ran out of materials on the day they built it but after 4 calls and waiting over 2 months it's still not finished! Do not make the same mistake and pay them all the funds due with no holdback until the building inspector looks at the structure. It was hard to get them back to fix the mistakes and now impossible to get them back to finish it at all. On the plus side the garage is built very nice but since the same crew also works for Kevin at KCM garages I'd give him a call. I wish I had.

Description of Work
Demolish and rebuild an existing garage.

We are a local manufacturer of Awnings, canopies, custom porch shades, awning enclosures, screen rooms, retractable and motorized systems and metal roof canopies. We pay attention to every detail and keep in excellent communication with you holding our every promise to satisfy you 100%. Our team has over 20 yrs of professional experience in the industry.  …

Residential and Commercial sealcoating and patching we edge, blow off debris crackfill if needed seal stripe and patch if needed this is my first year in business for my self but i have over 15 years experience and all my guys are experienced our goal is customer satisfaction  …

Romeo's Superior Home Improvements & Repairs is a full service residential construction company with a solid track record of quality workmanship and expertise in construction. Romeo Troncone is the owner and is a NY licensed Home improvement contractor with over 27 years experience in construction, and customer service. Award winning.  …

How is ATLANTIC GARAGES overall rated?

ATLANTIC GARAGES is currently rated 3.8 overall out of 5.

What days are ATLANTIC GARAGES open?

No, ATLANTIC GARAGES does not offer eco-friendly accreditations.

No, ATLANTIC GARAGES does not offer a senior discount.

Are warranties offered by ATLANTIC GARAGES?

No, ATLANTIC GARAGES does not offer warranties.

What services does ATLANTIC GARAGES offer?