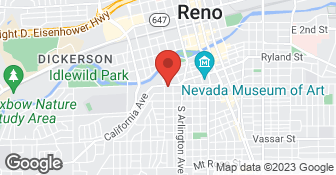 We are a full turn-key business from design to installation of all of our products that range from Playground & sports equipment to artificial turf. Check out our web page and always call us for a no obligation on site quote to help you design a place for all your yard recreational needs. Sierra Winds has been in business since 1984 and we strive to present the best in everything we represent. Everything is custom ordered and drop shipped to you direct from the manufacturer. We come to you!! If you prefer, our office is available by pre-arranged appointment at hours of your convenience. Call for appointments Merchandise only - all of Nevada and east of the Sierras; installations within Northern NV TBD...

I have 13 years experience and enjoy working outside. I take pride on the work we do and I feel that my work will show that. We offer a wide range of landscaping and tree services and would love to see any upcoming projects you have. Please call or click for a free estimate today!  …

For an estimate for your sprinkler repairs, contact us today, for assistance from our landscaping company. Monday - Friday: 8:00 a.m. - 5:00 p.m.  …

Legends Landscaping has been creating spectacular outdoor spaces for residential and commercial customers throughout the Reno-Sparks for a quarter century. Our start-to-finish capabilities mean we can design the space of your dreams and install it. From rock walls and outdoor kitchens to unique plants and irrigation systems—with our landscaping services in Reno we have the expertise to complete your project, no matter where your imagination takes it.  …

Everything went smoothly. All grass types and prices were explained to me at consultation, install dates were kept as scheduled and installation/cleanup went as expected. I'd hire them again.

The owner responded to my call for quote within 2 days. He sent Ron Brink to our house to go over the details. Ron was very thorough about assessing the plan and answering our questions. He even came later in the day so that my husband could participate. Ron had a quote ready for us within 2 days. We were having some hardscaping completed and when that was finished, Ron and the crew came to do the install. They arrived promptly and finished the project in 2 days. After grading the area a frame was built from pressure treated lumber and then filled in with crushed granite sand that was tamped down. The turf was screwed to the framework which was great because we have two active dogs (one is a digger). Everything was cleaned up before they left. The yard is really beautiful now and the dogs are loving it. We are extremely pleased.

After we signed the contract we waited about a week for the work to begin. We knew they had other jobs lined up before us and when we told them we needed the job done by a certain date because we were planning to go out of town they accommodated us. Showed up early in the a.m. to start work just as promised. Finished up exactly as promised. They were great. It was perfect and looks really nice. They are very pleasant to work with. The owner, Dick, came several times to check out the progress of the job and we appreciated his involvement.

Description of Work
They removed volcanic rock inour backyard that was put down by the previous owner. Then they installed artificial turf in the same spot.

I initially looked at turf through Costco and liked the price very much, but it was clearly more of a project than my husband and I could tackle. The turf website said it was an easy DIY project, but when I looked at the steps, I knew that it would be too much for us. So, I began to call installers and made contact with Sierra Winds. When they came, we talked about Costco's price and they actually were competitive. They helped to design, then measure for the turf. There was very little waste, as they pieced it well and used it very economically. The workmen were efficient and cleaned the work area very well at the end of each day and at the end of the job. I would definitely recommend this company.

Description of Work
This company put in artificial turf for us and we love it. We got two estimates and the company was very competitive and very professional. I was impressed at how quickly they did this project. They told us in the beginning that it might take up to two weeks for them to begin, but when another project had a glitch, they immediately came to us and began. The whole job was done within a week from start to finish. We totally love the turf, and wish we had actually done it sooner.