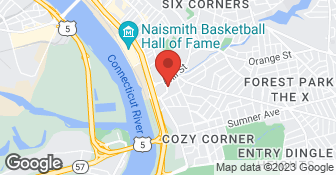 Extremely responsive, professional service. If I could give A+ I would. Thank you

Made appointment online for this morning. Email confirmation. Roto had a 1 hour window this morning & came well within the timeframe. Very quick & professional service: plumber snaked the toilet, found a problem, and was done within 15 minutes. Price seems a bit high (over $200.00!) but it worked, and we have a 7 day warranty.

Description of Work
Snake toilet due to recurring problem- not flushing properly.

I wasn't sure about calling Roto-Rooter to deal with our problem. I normally prefer to use the "little guys," but I gave them a call as my usual plumber was busy. We're in Northampton MA and Roto is in Springfield, so I felt a little weird having someone come from so far away. But I don't think I've ever called anyone for service and had such a SPEEDY response. They scheduled the work for the same day I called - within an hour or two. Damian arrived ON TIME, was professional and courteous, he heard what needed to be done and let me know EXACTLY what it would cost before he did a thing. It seemed a little high for what I wanted, but I needed it done and he was here. (And I say it seemed high - but I hadn't done any comparison shopping so I don't know) Damian did the work quickly, didn't leave a mess to clean up, and the cost was EXACTLY what he estimated. No hidden costs. If you want no-nonsense, timely, efficient plumbing service, it's worth a call.

The clog was removed very quickly.

Description of Work
Had a very bad clogged toilet. Before the job started, Anthony gave us different pricing - auger versus taking the entire toilet apart. Anthony Becker (1478) used his auger and cleared the clog.

Made an appointment online requesting service the next day. Received a phone call within the hour noting that "window" for service had been extended from 2 hours to 8 hours due to Massachusetts weather conditions. Accepted the conditions and received an email confirming appointment for 2/10/15 between 8 a.m. and 4 p.m. Roto-Rooter tech arrived close to 4 p.m. after heads-up phone call at 2:30 p.m. (a little more than the half hour before promised arrival but okay). Tech cleaned trap of clogging materials, explained and showed what was done. Cleaned area, removed equipment, sprayed for foul odor, received payment and was out the door by 6:30 p.m.

Description of Work
Cleaned house traps of standing water, etc. that was causing water to back up into cellar

Our kitchen sink was clogged the week before Christmas and we contacted the plumber that we normally used however he was unable to help. He gave us the number to reach Roto-Rooter and they came out to our house within 2 hours of the initial call on a Saturday. The technician, Dan Denya, was extremely polite and courteous. He explained everything he was doing and was able to unclog the drain. He also provided advice on how to avoid this happening again in the future.

When I moved into my house 15 years ago, the Septic System was new and I never gave things a second thought. Out of sight, out of mind, right? Until last week when sewage started spewing out of my shower and all of my drains were non-functioning. I had the tank pumped, thinking that was the problem, but there was more to it. I contacted Roto-Rooter based on their web-site which said service was available 24-7 with no extra charge for weekends or holidays. Late Saturday evening, I called a 1-800 number and the kind woman I spoke with took my name and said that someone would be out to my house first thing Sunday morning, between 8:00 and 10:00. Sure enough, Damien arrived bright and early (and I live a long way out from Springfield). I explained the problem to him, thinking that because the tanked hadn't been pumped in so long there might be a clog remaining in the pipes. He started with that premise and spent a good 45 minutes carefully sending a motorized metal snake up through my pipes - to no avail. Sewage remained in the shower and all drains were blocked. He then sent a video camera through the pipes to try and troubleshoot the problem.We watched together as the camera snaked through the pipe and stopped - at an obvious break in the pipe. Problem solved. He used a type of sonar device to locate the general area of the break, marked it and told me that he and a crew would be back the next morning. The next day, right on time, Damian, Tony and Sergey arrived. When they excavated the drain pipe it became clear that someone had previously done a really bad job on a repair. A twenty-three foot length of pipe was completely shattered and degraded; over the years, waste had slowing been draining into the soil until the pipe finally gave way. Someone prior to me had purchased 3" pvc from Home Depot in an effort to fix a problem cheaply. Damian, Tony And Sergey replaced the drainage pipe with professional grade, guaranteed-for-life material, leading from the house to the septic tank. They also installed a clean-out close to the house so that if a clog occurred, there wouldn't be a need to dig up the covering to the septic tank. The price of $2,300 was sobering, but so is living without a functioning toilet! These three men worked all day to do the job right and correct a problem that had been affecting me and the environment. I would absolutely recommend Roto-Rooter at 87 Carando Drive in Springfield, MA for any plumbing work. Damian, Tony and Sergey were prompt, responsive to my problem and very polite and kind.

It went well with Aaron & Al (Tech 477). They allayed our concerns about the clog, and were very personable and professional. The work was done and they were exceptionally careful and neat. I believe they work out of the Worcester office.

They are the best, we always call them. They are always here within a half an hour. They are kind, they do good work.

A family owned company. All work accomplished by the owner. Subcontracting when necessary is through fully licensed and insured companies. New Generations is fully insured and all work is permitted for your protection.  …

Roto-Rooter Plumbing & Water Cleanup is currently rated 5 overall out of 5.

No, Roto-Rooter Plumbing & Water Cleanup does not offer eco-friendly accreditations.

No, Roto-Rooter Plumbing & Water Cleanup does not offer a senior discount.