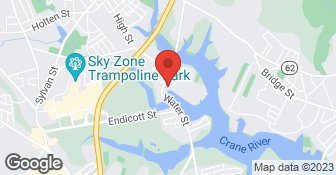 With over 30 years of experience, Cranney Home Services of Danvers, Massachusetts can solve all of your heating, cooling, electrical, plumbing and drain cleaning problems with one call. Our Licensed Technicians have had extensive training in their trades and in customer service. Cranney Home Services includes getting superior plumbing, heating, cooling, electrical services, and drain cleaning. Financing available. Additional website - www.cranneyhomeservices.com....

We recently asked Cranney to provide a price for a sewer injection pump. They gave us a quote that included materials, labor, and everything needed to complete the job. After Cranney canceled twice a rude installer showed up. He informed us that the price quoted was wrong and that we would need to spend an additional $900. After speaking with the general manager we negotiate a new price of $300 over the quoted price. That was the installers primary goal and he could have cared less about the impact of that additional charge at this trying time of a pandemic with limited money. It’s clear by reading all of the reviews that this company is not honest. Read all the reviews!!

very well - on the expensive side - but responsive professional service

The proposal that was submitted was way over my budget.

The technician came on time, looked at sump pump which was not working, went back to his van, came back and said it was major work could not be done then. I had one inch water in my basement and I was afraid if the pump didn't get replaced, eventually it would reach the boiler. I had told the office that and the they had assured me that the technician would come prepared to do the job, which is the reason I would have been ok to pay the $50 fee for him to come out. He seemed overwhelmed looking at the system. I even asked him if he had replaced a sump pump before and his response was, I have never seen this kind of system before. The system I have is a pump with battery back up, nothing complicated. He wanted me to pay the $50 for just coming out and telling me the job could not be done then? Very disappointing!!! I was able to get someone else come out later in the afternoon and replace it for me in about 1.5 hours or so.

The young man was very respectful and pleasant. He came right in and looked at the two lights and gave us an estimate. We asked about other problems we have but they will have to wait. He got the stock came back in and did the work very quickly.

National Grid registered a gas leak from my burner. Justin and Jared responded to perform a test of the lines, then met with the city inspector to get things straightened around. Justin and Jared were professional, kind, low-key, efficient, and inspired my confidence which isn't easy to come by. They were very neat and wore booties over their boots showing respect for my home... Cranney Home Services did very well by me. I called the company to thank them for assigning Justin and Jared to my home. I highly recommend them. The cost of the job included the permit fee charged by my city.

Description of Work
Resolve a gas leak reading from my burner.

Two weeks later still did not get any estimate for this service. Called them and was told that they don't know what happened but will 'send it out soon'. Makes one wonder about their reliability...

Description of Work
Technician came to provide an estimate for a split-system installation.

I was a joy to hear him tell me about how honest the guys were " Well, Let's look at it and see what we can do." Well, they not only gave him what he wanted BUT cleaned up the wiring under his desk and moved the desk back in place! He had been trying for weeks but no one wanted the small job. Now he said he doesn't have to worry about kicking plugs and wires. The people from Cranney more than took care of him. Thanks again the the people from Cranney. I only spoke with Noah48 Jackson St.(who talked with me after hours). I didn't get the name of the people who came out to the house in this lousy weather But thanks again.

Description of Work
My Father -in-law needed a couple of outlets put in by his desk.

It went very well. Techs were very thorough and professional.

Description of Work
Furnace was shutting off periodically.

We are a small company based mostly in residencial work but have substainsial comercial experience. We have a diverse background in the field, our team is easy to work with and our pricing is competitive with the market.  …

We are your solution to everything electrical! From your everyday electrical construction and repair items, to design of a complete integrated home system from the ground up and more! McCurdy Electric - call for peace of mind - we'll do the rest. Our trained and certified team of Electricians bring many years of experience to meet every one of your electrical projects. We stay ahead of the curve when it comes to custom installation and design of specialty electronic items; such as generator systems, smart home technology, advanced lighting control, Audio/Video, alarm, video surveillance, and much more. We can help you with all of your Electrical needs and we have the track record to back it up. Please visit our website at www.McCurdyElectric.com for more information. Call for Peace of Mind. We'll Do the Rest.  …

Family owned and operated all-in-one home contractor in the North Shore and Greater Boston Area. We have over thirty years of experience providing our customers with service and quality work that cannot be beat. Our services include Plumbing, Heating, Cooling, Drain Cleaning, Electrical, and more. Give us a call today to see what we can do for you!

Cranney Home Services is currently rated 4.6 overall out of 5.

No, Cranney Home Services does not offer free project estimates.

Cranney Home Services offers the following services: Family owned and operated all-in-one home contractor in the North Shore and Greater Boston Area. We have over thirty years of experience providing our customers with service and quality work that cannot be beat. Our services include Plumbing, Heating, Cooling, Drain Cleaning, Electrical, and more. Give us a call today to see what we can do for you!

Are there any services Cranney Home Services does not offer?