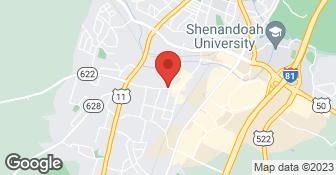 At Jesus Roofing we specialize in roof replacement and repair in Virginia. Our cost of $230 per square includes removal of old shingles and installation of 30-year architectural shingles. We include a 3-year warranty on all work...

Gregory's Inc. was founded in 1951. The present corporation was formed in 1966, with Ralph S. Gregory as President. We are a small enough company to pay attention to every detail, yet large enough to satisfy the needs of our customers, no matter how large or small the project. Please contact us directly at 540-869-3500 office@gregoryexterior.com.  …

My name is Erik I do landscaping services mow lawns, mulching, weed cleaning flower planting and any other jobs you need around the yard at a reasonable price  …

Jesus and his crew far exceeded our expectations. They finished our roof within 1 1/2 days! They arrived punctual each morning and worked tirelessly. When they were finished they cleaned up so well you couldn't even tell work had been performed! I was worried about nails being left on the ground but Jesus's crew assured me they will clean and do the best they can to get all of them. Our new roof looks amazing! We went with a darker color(we have red brick home with black shutters and a red front door and an paved driveway) so we felt the darker shingle would look best and once they were done it looks wonderful! We were so pleased with their work and we highly recommend Jesus and his crew! We have even reached out to Jesus to give us an estimate on replacing our gutters! I would definitely hire Jesus again!

Description of Work
We needed our shingled roof replaced. I searched for a local roofing contractor and received 4 estimates. Jesus arrived on time for our estimate appointment. He was quick to respond and send us the estimate. Jesus's estimate was fair, reasonable compared to the other estimates. We chose to go with Jesus.

Jesus was great to work with. Jesus came out on a Saturday in the rain on time and gave me a estimate. Jesus showed me samples and recommendations and also helped pick out the color and style. Jesus ordered the shingles and a week later Jesus and his crew replaced the gutters,siding and replaced the roof. One of the best experiences I have had with a contractor and I will be using Jesus in the future.

were not the best outside. Jesus came back a week later and re-shingled my roof.

Description of Work
After snow fall and the melt we developed a leak in our kitchen. It was found to be from missing and old shingles. Jesus Roofing responded to my call for service promptly the same day and took the time during the visit to figure out where the leak was from and made the necessary patches to correct the problem. The weather was cold and conditions

Jesus was very prompt and professional. He patiently answered all of my questions about every detail of the process and material involved in replacing my asphalt shingle roof. He communicated clearly and quickly and his estimate was very competitive. His crew showed-up and worked very efficiently over two days. They paid attention to details and cleaned-up afterwards. I am very happy with the quality of the work and most especially the feeling that Jesus and his crew genuinely cared about doing the job right. I would definitely recommend them to others.

It went well. He arrived on time and explained the problem and what it would take to remedy it. He showed up on time and even gave me a referral for an electrician to assist with the job. Very helpful and very professional. I would highly recommend him.

Jesus Roofing staff were prompt and cleaned up after the jobs were completed. All my questions were answered ... great communication.

Description of Work
Replaced shingles on my home and sealed shed roof to eliminate leaking.

Didn't call back after first message, but responded after second. Showed up on time for estimate. Performed work the next day. Fixed the water drainage problem, and did it for less than the estimated cost. I was pleased with the work and I would use him again.

Description of Work
Fixed an area of poor drainage from roof to gutter, allowing the rainwater to flow into the gutter rather than under the eave and down the siding.

After another downpour we noticed that the skylight leak had not been fixed properly. We contacted Jesus roofing who said he would be there later that day, as he was going to be in that neighborhood fixing somebody else roof. He showed up when expected, he was curtious,got to the problem right away by finding out exactly where the leak was occuring. It seemed to happen only in downpours. We had previously paid to fix this problem, but it was not solved. He went on the roof with the hose and poked around (figuratively) until he found the problem which turned out to be a place where the water ran UP the skylight into an unsealed area. For his trouble he only charged us $50! We definitely shall use him again for a repair or roof replacement.

Description of Work
fix a stubborn leak around a skylight

Description of Work
I used the company for personal and also for commercial (church) for roof repairs at home and metal roof painting for the church.

The estimate was reasonable and I had them re-shingle the two that were missing (I keep a bundle on hand just in case). They did it fast and even glued (roofing compound) the two replaced shingles and then some to make certain they wouldn't fly off. I would highly recommend this company!

Description of Work
I had two shingles that keep coming off in the high winds we get. When I called this company they set up an appointment for the next morning for an estimate. Even came earlier! The estimate was reasonable and I had them re-shingle the two that were missing (I keep a bundle on hand just in case). They did it fast and even glued (roofing compound) the two replaced shingles and then some to make certain they wouldn't fly off. I would highly recommend this company!