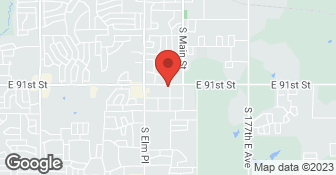 Welcome to Prestige Roofing & Remodeling, LLC. We are truly a “full-service” roofing and remodeling company, offering our customers the most quality, the most dependable office staff, sales & claims consultants and most thorough installation crews comparable to none other. It’s more than just the initial inspection or sale it’s about being here when the phone rings and helping you understand what we do best. From residential insurance claims and much needed age depreciated re-roofs to commercial overlays, coatings and new roofs. At Prestige Roofing we’re not looking for clients we’re looking for long lasting relationships and the opportunity to assist you, your families, your friends and your businesses for years to come....

Stephen and his staff are fabulous. They stayed late and came early just to meet my deadline for a family gathering. Yes! call Prestige and they will take care of you.

Description of Work
repaired leaks left over from another companies poor job replacing my roof.

Asked for a quote on roof, but they declined. They wanted to know exactly what the insurance was going to pay and we refused to disclose that. So, we came to an impasse. Salesman was very pushy, which didn't go over well either.

Description of Work
Asked for a quote for a new roof.

The new roof Prestige installed sprang a leak next to my chimney that did damage to my living room ceiling during the first big rain storm after the work was completed. They come out the next day and fixed the leak, but they have, thus far, refused to fix the damage to the living room ceiling. For the most part, the work they performed was acceptable, but on several occasions they incorrectly handled situations during the installation that wouldn’t have been a problem if the crew had spoken English. The cost of the roof was reasonable, but the damage they left behind is costing my insurance company over half the price of the roof. While they responded within a day to the call about the leak, they wouldn’t return my calls when it came to the ceiling damage caused by the leak until I wrote them. When they finally showed up to look at the damage, them seemed cooperative and said they would get right on it. After several more calls for status and two weeks time, I receive a letter stating that they would not fix the damage and accused me of trying to cheat them. At that point I turned it over to my insurance company. As a side note, the shingle supply company Prestige used broke off a section of my driveway when delivering the shingles, but they quickly fixed the damage without argument , which I find refreshing.

Description of Work
Prestige installed a new 30-year roof, replacing some damaged decking in the process (which was requested as part of the contract) and contracted the replacement of all of the guttering.

Prestige showed up on time and completed the job in a timely manner. They were very good about explaining what they were doing and why it was necessary in order to correct the problem. Their work was high quality and everything was cleaned up afterward.

Description of Work
Our roof was leaking around the fireplace. When the warranty company sent out a roofer he told us that the roof had hail damage. We contacted our insurance company who sent out a claims adjustor. He told us to get two estimates. Mr. Ty Sanders of Prestige Roofing came out and gave us an estimate to replace the roof with 25 year shingles and to fix the living room ceiling where it had leaked. The job was done when he said it would be, and all the roofers he sent were very polite, considerateand extremely hard working. The property around the house was not damaged in any way and they did an excellent job of cleaning up. There isn't a nail on the ground anywhere. The dry wall gentleman and the painter did a great job fixing the inside ceiling. If you should need a roof or any repairs and want a first class job, I would highly recommend Prestige Roofing on West Washington in Broken Arrow.

Prestige Roofing & Remodeling, LLC is currently rated 4.3 overall out of 5.

No, Prestige Roofing & Remodeling, LLC does not offer a senior discount.