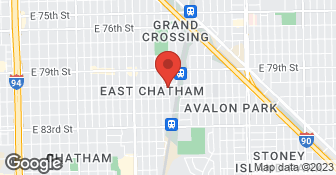 So, the work was impeccable. However, I'm not sure it was worth the loss of my engagement ring. I had a tree take down the riser on my house so I was without power for a week. They stayed late the first day to make sure the repairs were complete enough for me to at least get ComEd to restore my power. That was when I discovered that my engagement ring as well as some cash was missing. When I talked at length with the owner, Terrius Winters, he acknowledged that it was probably one young man in question & admitted to having immediately cut ties with him because he was left with an uneasy feeling about him, My ring was never recovered and Terrius said he was unable to pay me for the ring in full but agreed to making payments. Since he seemed to be taking responsibility & attempting to pay me back I made the decision to not move forward at that time with filing a police report since I didn't think a small business owner should be punished for giving a young man a chance & getting burned. He made 2 payments over 2 months, totaling 1/4 of the value of the ring. As he was making arrangements for the 2nd payment he asked if I would be okay accepting half the value of the ring. I explained that this was not acceptable for various reasons. I should have known at this point he wasn't going to bother anymore. The 3rd month he ignored me. This last month he finally bothered to answer me & told me that he had made his last payment. So...now I will be getting married next month without an engagement ring. And have only been compensated, for something of course that is priceless to me, for 1/4 of it's actual value. Again, their work is impeccable. However they are not very ethical in my opinion. So should you hire them, make sure you don't leave anyone alone. Ever. And make sure you check all your things before they leave because even if Terrius acknowledges that something happened he might not be upstanding enough to actually take responsibility for it.

We are sorry to hear that you are going through this difficult situation. We prioritize a courteous and professional experience for every client and we can assure you that our team has upheld that standard in this situation. During our work with you, you told our team that your home had been burglarized twice previously, with one incident happening within a few days of our team’s visit and that you were unsure of the items missing. After you contacted us, we assessed any potential fault on the part of our employees and have not found any evidence to back up your claims.
5.0

Terry the owner and his team Carlos and Conrad were professional and respectful. Given that the work took longer than expected their continued focus on safety and quality was quite impressive. We appreciate Terry informing us that there was the possibility that an unexpected issue may arise and that there might be an additional cost. We be using him again to install additional fixtures.

Description of Work
He changed the wiring in my house.

Wasn't very trustworthy and ended up overcharging me for light fixtures he claim he paid $10.00/ piece for when they were only $6.00/piece when I went to the store a week later to buy more

Description of Work
Wasn't very trustworthy and ended up overcharging me for light fixtures he claim he paid $10.00/ piece for when they were only $6.00/piece when I went to the store a week later to buy more

The work was completed as requested. The finish work where the siding was cut was not finished. Terry informed me of any changes that needed to happen along the way. This was a pricey job. It needed to get done.

Description of Work
I needed a meter fittings and cover to be up to city code for new service. I also updated the electrical panel. The estimate was done the same day of the call. The permit was pulled and work began the next day.

He does really good work. He was where he was supposed to be when said he would be there. I haven’t had any issues with the work he did.

Description of Work
I used Accurate Electrical Solutions. He put in a new circuit breaker.

They were very professional and explained the work needing to be done. It wasn't work that I could have done so I appreciate the expertise.

Description of Work
Replaced one of a three pole switch.

It went well. They're professional.

Description of Work
I needed a 240 volt line, about 8 feet, run to a Kenmore dryer. They had to open a little bit of drywall to run the line.

It went well. Everything was good. When I called them, they told me when they would be here and they did what they had to do. We talked on the phone several times.

Description of Work
We thought we had an electrical problem in the kitchen. We have fluorescent lights and we can't plug them in like they should so Accurate Electrical Solutions came out and plugged them in for us.

They did great work. They were on time as well.

They did excellent, excellent job. They were on time & cleaned up after themselves. They also asked if there was anything else I needed done while they were here. I didn’t have anything at the time but found some things I’d like done in November & will definitely call them.

Our company has a proven track record of completing projects that surpass customer expectations. The experience to deliver quality work and peace of mind is the satisfaction we provide. We specialize in troubleshooting, new installs, replacing old light fixtures, installing new can lighting, replacing old outlets, new GFCI outlets, new panel ,meter , and service work, all electrical work will be done up to the Chicago electrical code. You can contact me @ 708-341-5162  …

We offer quality service at an affordable price. Contact us today about an estimate.  …

A to Z Electrical Svc

Family Owned & Operated. Since 1967, A+ Rating With The BBB. No Subcontractors. Licensed Bonded and Insured. Emergency calls.  …

Accurate Electrical Solutions is currently rated 4.5 overall out of 5.

No, Accurate Electrical Solutions does not offer eco-friendly accreditations.

No, Accurate Electrical Solutions does not offer a senior discount.