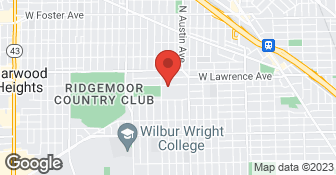 We are a family owner Business started up to provide superior craftsmanship, top quality product and exceptional customer service. Over 20 years of experiance in the roofing and insurance Co field.

I WAS satisfied with their work and even gave them an excellent review, even though they had left 200 pounds of materials from my job and another customers job in my yard and nails scattered throughout my yard and did not replace a piece of facia that had been damaged in the storm, but I cleaned up the nails and called Justin to pickup the materials that had been left. Three months later however AJ ( who told me he was the owner called saying that they had miscalculated my payment and I owed them $342.65 ( I had paid them $9000.24, at that time)I told AJ that I would only pay him more money if they came out to pickup all the material that they had left and replaced the 1 piece of facia that was missed. AJ and Justin came out and picked up everything and I gave them a check for $ 342.65, and said he would order the facia and get it replaced. Two Months later they got the piece on the house, then Justin called and said I needed to pay $342.65 for the 1 piece of facia they replaced, I explained that I already had and they needed to go back and check. Then AJ called me back demanding that I hadn't paid and he was going to put a lien on my house and that would cost an additional $2500, he would not listen to a word I said and got VERY ANGRY. I hung up the phone and texted him to go back and check his records, then call me back with an apology. He texted back immediately that I owed him and he was putting a lien on my house and he would never apologize because I interrupted him. Then the owner, Jon texted me that he was putting a lien on my house. I texted back the CLEARED CHECK from my bank showing the payment had been made. In the mean time AJ, Jon, and my husband had been calling and texting back and forth getting more and more angry, threats were made from both sides and Jon had 7 of his employees write false bad reviews of our business online. Even after I proved to them that we had paid in full they only said it was a mistake and never apologized and still put up more FALSE BAD REVIEWS on a business they had never been to. Please just decide for yourself if this is how you should handle business.

Description of Work
New Roof on my Home and Garage

Jenny from 2G came out after a storm that caused hail and wind damage to my roof. She helped me every step of the way with the insurance claim. I am very impressed with how down to earth and knowledgable she is. This was one of the best experiences I've had working with a contractor. I would definitely hire them again and recommend to friends and family.

The siding was taken down and cleaned up which was in bad shape to begin with and they took what I had left down and were really clean throughout. They then took down the gutters and Wow they were cool and they showed me where water was probably leaking into my basement and it was exactly where they said. They showed me that my downspouts not draining water at all in the other 2 downspout areas was forcing water down this one area and this area was not having the water go to the sewer area. Seems so simple but I had no idea. The entire process only took a couple days and I am so glad I did it.

Description of Work
Had my old siding replaced. I also had my gutter removed and replaced and these guys were good and I realize now that the flooding I had in my basement was probably my gutters and the fact I did not have downspouts working at all. So glad I did this and 2G was on time and very honest. I would recommend for anyone needed siding or gutters

Description of Work
Had a solid referral to 2-G. Chris and Tim came out, did an assessment of our roof and informed us we had extreme hail damage. I called our insurance company and Chris and Tim rode shotgun throughout the entire process. Our new roof is super, looks great and the communication we kept helped to make all of our expectations, theirs and ours, work out.

Description of Work
Complete tear off and replacement of our roof. Approx 33 squares. Arrived on time for the estimate, arrived early for the start of the job and the workers waited until the start time before they started, the job was delayed because of rain but the returned on Saturday and Sunday to finish. Workers cleaned up the jobsite (my yard) and I could only find 2 nails aftera a thorough examination after they left. Kudos!

Excellent! Chris was really friendly and took the time to answer all of my questions. This was my first home insurance claim and major home repair. He made me feel very comfortable throughout the entire process and the work was completed perfectly. I have already recommended him to my neighbors and friends.

Description of Work
Provided a free inspection of my roof and home exterior following a hail storm. Coordinated with my insurance to assist in processing a claim. Replaced roof,siding and window trim.

It went fantastic, I was shocked at the professionalism in which they conducted business. They were always courteous and respectful. The job was completed incredibly fast, and I loved the checklist that they filled out with and went over with me in detail to make sure I was satisfied with ever aspect of their work. They were really concerned about how clean the crew was as well. I will definitely call them again and I will use them for anything I ever need..

Description of Work
Replaced the roof on my house, followed by the little bit of side I have on the back porch. They then installed a wood fence around my back yard.

After Receiving a mailer from 2G exteriors I called for a free evaluation of the condition of my roof. They sent out an estimator who was a very well educated and informed me of storm damage and was very thorough in his evaluation. They were prompt, professional and did an excellent job of working with my insurance company. The whole process was simple and they got everything approved from my insurance including new gutters. They handled all of the logistics with the insurance adjuster to make it a hassle free experience for my family and I. The roof looks great and the cleanup was exceptional. When it comes time to replace my siding in the future I will be hiring them again. Thank you for the great job!

Description of Work
They came by pretty quickly and said they would call with an estimate but never did and didn't respond to the message I left. It might have been too small of a job for them but they should have said so.

2017 - 2018 - 2019 -2020 SUPER SERVICE AWARD WINNER! EcoChamp Windows and Siding prides itself on being the premier window, siding and roofing company in Cook, Lake, McHenry, Kane and DuPage Counties. We have provided exceptional service to both residential and commercial properties for many years. We have built an excellent reputation for customer satisfaction by providing quick and FREE estimates. With great attention to detail and competitive pricing, our products come with the best warranties in the industry. We pride ourselves in working with proven and leading manufactures, so our customers will have the most efficient, cutting edge products in the industry. Our business is driven on delighting our customers with great service, products, and highly trained expert installers with over 30 years experience. EcoChamp has been awarded numerous customer service awards, because of our hands-on, no pressure approach. We are screened and approved professionals, giving you the peace of mind you need. References gladly provided.  …

How is 2G Exteriors overall rated?

2G Exteriors is currently rated 4.5 overall out of 5.

What days are 2G Exteriors open?

Are warranties offered by 2G Exteriors?

What services does 2G Exteriors offer?