Help! There’s a Bat in My House, and I’m Worried It Might Bite

There are a lot of common pest control issues that’ll keep homeowners up at night, but few things strike fear into the heart of people the way the thought of finding a bat in the house can. Whether it’s how Hollywood has conditioned us to associate them with vampires or urban legends have us convinced they’ll drink our blood (the bloodsucking version is called a vampire bat, after all), bats can seem scary.

The good news is that environmentally beneficial mammals like bats actually want less to do with us than we want to do with them. Read on to learn more.

Animal in Your Chimney? Read This First

Because climbing down the chimney is reserved for Santa

Bats are mammals and are part of the order Chiroptera. While they aren’t the only winged mammals—some glider breeds of squirrels also join them there—bats are the only ones capable of flight.

What Do Bats Eat?

Well, for one, not humans. So you don’t have to worry about becoming the snack du jour for one that’s gotten itself trapped in your home. Instead, most varieties rely on insects to sustain themselves. Some bats will nosh on common garden pests like mosquitoes and beetles, making bats beneficial to humans. 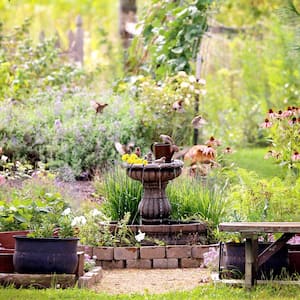 8 Tips for Creating a Wildlife Sanctuary in Your Backyard

Create an outdoor haven for all creatures great and small

Where Do Bats Live?

Bats are nocturnal, which means they’re mainly active at night. Because they keep odd hours, they require a nesting area that’ll be quiet and safe while snoozing. Typically, this means caves, the crevices of rocks on mountain faces, old buildings, under bridges, and in trees. And yes, unfortunately, sometimes that means your attic and the eaves of your house as well.

Dealing With Bats at Home

Finding a bat in your house can be scary, but you can do a few different things, depending on how and where you find one.

Discovering a sleeping bat (or bats) in your home during the day is probably the best-case scenario, especially if bats are in your attic, garage, or other easily avoidable area with an outdoor exit point. Remove access to that part of your house while ensuring there’s an easy path for them to get outside when they wake up.

While you wait, figure out how they got inside so you can seal the area off while they’re out hunting for the night. Or, call a bat removal pro to help.

Being awoken by the sound of flapping wings and discovering a bat is flying around inside your house is obviously less ideal, but you can follow some of the same processes as above. However, if the bat has infiltrated your living space—or worse, your bedroom—you might feel like you need to take immediate action.

Some local pest and wildlife removal experts near you have local emergency pest control pros for just this reason and will come out to assist with urgent matters.

Animals in Your Attic? Follow This 5-Step Plan for Removal and Prevention

Hiring a Pest Control Pro vs. Removing a Bat Yourself

No matter how brave you’re feeling, handling wildlife (especially wildlife known to carry rabies) is a task best left to the pros. You can expect to pay between $230 and $650 for the cost of bat removal services.

Bats are unpredictable creatures, and while they’re unlikely to land on you and give you a nip while you’re watching TV, they may be more inclined to bite if they’re feeling threatened or attacked. Additionally, some bat populations are legally protected and harming them, even accidentally, could land you in big trouble with the law.