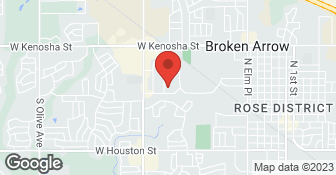 Spring will be here before you know it. Whether its a commercial property or personal residence let us hand all of you landscaping needs. We offer 12 month full service programs. Call 918.995.1664 to schedule an appointment today!...

I have been very happy with the professional lawn care provided by Best Lawn and Landscaping. We have a large acreage with lawn that goes pretty close to 2 sides of our pool. They have been timely and careful with their mowing, edging and clean up. Our pool was never trashed with debris when they were done. Wish I had found them sooner. Strong work! And thank you.

Excellent Best Lawn/Landscaping are very professional show up when scheduled and considerate of our land ie: no smoking pick up sticks when needed and so on. They are also the cheapest. Dint be fooled by other bad reviews because the New Owner is very particular and a Very nice and understanding gentleman. A++ in our opinion.

We were with this company for many years and were happy with them, so when we moved four years ago, we continued with them at our new home. Things were fine initially, but gradually the service began to go downhill. They continually leave our back gate open even after being reminded that we have a dog that could get out. They ran across our patio with the riding mower damaging one of the slabs. Although we asked them not to, they continue to mow through the ditch when it's wet digging up the lawn and leaving deep tire tracks. On one occasion, they put one of the mower blades on upside down, and we had long "stripes" across our entire lawn where they had scalped every other row. It took several months to grow even again. They ran over our solar lights, breaking them and leaving glass shards in the back yard where the dog plays. They apparently thought we wouldn't know, as they didn't say anything until we complained. They knocked over one of the stone pillars lining the walkway and didn't notify us that it had happened. When we called to complain, they came out and set it up again, but it is permanently damaged and will need to be replaced. They have weed-whacked some of the flowers by getting too close to them. All of this has happened in the last 6-9 months and in spite of assurances that it wouldn't happen again, it has. It's unfortunate that after nearly eight years, we are cancelling our service and looking for another company. I'm not sure what happened but they are not the same company they were eight years ago. They just can't seem to get it together.

This company dropped me as a customer after doing my yard for over a year and never explained why. They just refused to call me back.

He never showed up when he said he would and would not answer phone calls or texts. Be careful!

Description of Work
talked to him on the phone about lawn mowing.....

never showed up to give estimate or do service

They do an excellent job in a timely manner.