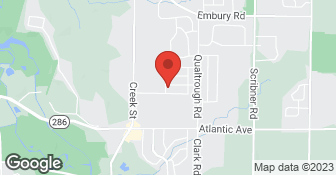 At Gerlach Home Improvement, our commitment to quality is evident in every job we do. Our highly skilled staff has been providing expert workmanship in painting, roofing, siding, window installation, gutter installation and carpentry throughout the greater Rochester area since 1974. Investing in your home is important, and with the professionals at Gerlach Home Improvement you can be sure that the money you invest will result in quality home improvements done right the very first time. Whether you are considering new siding or you need some rotting wood replaced, Gerlach Home Improvement is here to help and answer your questions. Quality in every job we do. 5-25 employees. Uses subs for gutters. Charges a flat rate. No travel charges....

Family owned and operated business that started out as a part time business specializing in deck care and restoration and has grown into a full time home service firm. We have 23 years of experience in our field and take pride in our work. Punctual, courteous, neat and attention to detail are some of the ways our clients describe us. Referrals account for nearly 50% of our business and we take that very seriously. Now serving parts of Lee county in Florida for the winter months. Our services range from general handyman to bathroom remodeling. Jobs can be priced by the project or by the hour. No job is too big or small. Consultations are always free and can be worked around your schedule. When we are hired to do work, we never use subcontractors. Our name is too important for someone to tarnish it. The owner is always on the job and doesn't just send in a "crew" to complete the work.  …

"We are a family owned and operated business in Rochester NY. We handle any and all types of home renovations and remodeling. Give us a call or checkout our website to get more information on getting your project done."  …

Need a roofer in Rochester, NY? Looking for home improvements? Welcome to DP Customs N-Terior & X-Terior, located in Rochester, NY. Our fully licensed and insured general contractors specialize in all of your home improvement needs! Whether you need gutters, flooring, countertops, roof repairs, home addition builds or carpentry service, contact us today at 585-820-7022!  …

Terrible. Tiles were torn off from the storm we had last year. Water was coming in and ruined a bedroom ceiling and wall. He started in March 2017 and did not fix the problem. Kept coming back several times saying it was fixed, but as soon as it rained water was still coming in. Finally I got Sunset Roofing on October 30 and the repair was completed by November 2. What started to be a small job in the bedroom turned out to be more expensive because of the damage from March to November. Would not recommend. Sunset Roofing took care of the roof in one day. Highly recommend them. 585-538-6086

Great. Doug followed through on his quote and completed the work asap.

It did not go well. I needed to follow up where they missed many spots with caulking and painting. One of the workers painted around two rocks leaning up against the garage. I was promised that holes or rotted wood would be replaced and I had to follow up to remind them to do that. They made a mess on the foundation of my house but they did clean it up after I asked them to. They needed to glaze several windows on my sun room, but missed a lot and did not paint over the glazing. I had to withhold payment so they would get the job done. I found a window cracked after they did the glazing and the lumber that they replaced was thrown in my back yard. This may be the shoddy work of only one foreman, but I could never recommend this company to anyone. I was told that they could not caulk cracks because the "house needs to breathe" by both the foreman and the owner. I asked if the second floor window sills were painted and I was told yes they were...they were not. Needless to say, I was extremely frustrated with this company. When I withheld payment the foreman insulted me by voice mail and in a text message. When I shared this with his boss, the owner, he just shrugged his shoulders.

Terrible job in every respect Did not prep the house at all Used the wrong stain House looked worse after it was finished than it did before it was stained. Painters left all their equipment in our garage for over a week.

Description of Work
Stained and painted outside of house

Doug Gerlachs was replacing a neighbors house roof up the street from my house. As promised earlier, Doug said he'd send a few of his workers down to my house to replace the vents when they were "in the neighborhood". 4 or 5 workers came down with ladders and tools (second story sofitts) and finished the job in about two hours total. Nice quality vents, excellent job, and friendly and very capable workers! I've used Doug before for roofing and I know he does a good and timely job.

Description of Work
Replaced my soffit vents (18) which were damaged by winter storms and ice dams. Removed old smaller vents and enlarged all holes and added 8 new vents.

I needed to have full gutters installed on my wrap around porch plus on my garage. I called three times and he said he would come out "this week", then the next week he said "this week" then after 3 weeks I called (almost out of curiosity at this point) and he said "next week". When I asked if he could honestly tell me why he couldn't just drive past my house in past 3 weeks he just stumbled upon his words. When I asked when he could actually do the job he said "in a couple of weeks."

Description of Work
He did not do estimate or call back at all.

My first review is below. I was very happy with the services. However, i had 2 new windows installed and they promised to come back to finish the job. I trusted them. The exact quote was "you paid for the full service- we will come back and paint around the windows and caulk them into place-just call us when you are ready." Well- three phone calls and an email to the owner Doug Gerlach and the original crew with no response at all! So my job is unfinished and the promises unfulfilled. Be wary of this company and the promises that they make. I trusted them to fulfill what was promised. BUYER BEWARE. I really have to give this team an A+. They did a great job on the exterior of my newly purchased home. This was a tough job as we have cedar shake siding that was painted before with the wrong paint and was peeling and had rotted boards scattered throughout. Doug came out and gave an initial estimate that we thought was mid-range from other quotes we received. I liked the fact that they gave suggestions on trim ideas that we had not thought of and that they also offered general contracting (replacing of boards, rust, etc.). Since my home needed more TLC than probably the average paint job, they really took thier time to make sure the job was done the right way- suggesting an oil based primer underneath to allow the new paint to adhere properly. Although this added cost and time to the job- it was the right thing to do to make sure it was done correctly after researching it myself. They hand painted the entire house and deck and replaced problem areas only after checking with me first to see if it was OK. I thought their attention to detail was exceptional and would use them again. I can only talk about the crew that was sent over to the house led by Tom McGinnis and his two associates that did the actual job. They were professional, courteous and cleaned everything up. If i had to give one slight negative, I was surprised that the owner- Doug Gerlach who quoted the job initially did not visit the job site or call me to see how everything went and if I was satisfied but that should not be a show stopper since his crew was exceptional.

Description of Work
BUYER BEWARE-painted the exterior of the house, deck and general contract work for cedar shingle replacement- did not finish the job as promised.

We did not go with Gerlach Home Improvement but he came out, he was prompt. I called him, he came the next day and he had the estimate. He was very professional. We didn't go with him only because of financial reasons. I would call him again.

I thought the quote was very reasonable. I did not use the contractor because at this time I needed only the quote, not the service.

Description of Work
provided a quote for house painting.