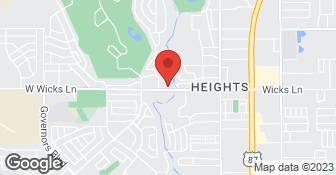 At Bruce Tall Roofing, we are committed to providing you the best experience possible on all exterior services from roofing repair to gutter installation. We are an exterior restoration company that is dedicated to providing excellent customer service to all of our clients in Billings, MT and the surrounding area....

Arranged to get an estimate for new gutters. Told them I could meet them anytime to allow for job site inspection/measurements. Said they didn't need to, that they would use satilite photos to measure. OK. A while later I did receive an estimate which after a couple of questions, I agreed to. Was told they would work on scheduling me in which should be about 2 weeks, but would let me know for sure. I never did hear back from them. I called, texted, and emailed them a few times, but never did get any sort of response

First I will say that when I first tried to contact them through their website, I never got a response. Then I tried through Angies list here as they had a coupon for setting up an appointment, there was not only no response but no coupon either. So i eventually called them and it took several tries because the phone number at the time went direct to the owner of the company who was traveling out of state working on repairs and it was a horrible connection so it took a few calls back and forth to get the information down. He did his best on that and eventually I had someone come out to look at the items and was told no problem and that a bid would be forthcoming. It took quite a bit longer than I expected and they wanted my paperwork and stuff so I give them that and then they had to work with the insurance company about some of the roofing material which they did with only slight delays. At this time is getting close to the cold part of the year so we were rushing to get it done before winter. I get my estimate and surprise its only the roof bid, which made me fairly uneasy and so I asked them and was told they wanted to keep the two items (insurance and other repairs separate on the bids) to make the paperwork easier. I was uneasy but went ahead with it and they came in and did the roof in two half days because of the weather and they did a fantastic job and I have no issues with my roof. That part of the job was great and efficient and everyone was happy. I was told by office staff that they PROMISED they would get out and finish my other work after the winter months were over. Fast forward a couple months and I start trying to contact them about coming in and giving me a bid for the rest of the work the PROMISED they would do. I get no response to emails for two months and finally I end up emailing the owner of the company and the guy who came into the field to work on my house and they tell me the office person who I was working with is no longer there but they will get the new person onto it and all will be well. That was 6 months ago. I have called and emailed through personal email and their website and phone calling to the point of it just being embarrassing of me begging to talk to the person in the office to get a written bid. Finally I had sent the final email saying they had five business days to get me some kind of response or I was going somewhere else. SO at the very last minute on a friday at like ten minutes until they close i get a small apology email with some puzzling questions as I had included all previous information in previous emails about what needed to be done and what had been done and what promises were made. Fast forward another month and a half of me sending two last emails begging for either a written estimate or just telling me that they were too busy. Thats all I asked, I needed a yes or no so I could either go ahead and wait for them or look for someone else. So here I sit with no answer and them basically avoiding me. Their work is excellent, The people are friendly when dealing with them in person and the field man is fantastic and he went above and beyond to try to help me but I have NO IDEA what in the world is going on in the office because they could care less about small jobs or even professional courtesy it appears to me. My advice is if you have one big project to call them otherwise go with someone else for your small projects because either they are too busy or there isn't enough profit in a small job, Im not sure but it took me a good 8 months or more from the time my roof was finished until today when I have finally had enough and will be looking for a different contractor.

Description of Work
I needed my roof replaced after a couple months of bad hailstorms. I also asked them for estimates on my soffits,fascia,gutters, and several other small items on my home that while replacing the soffit and fascia would almost need to be done anyway.

Description of Work
Things started off good, we met with Bruce and some of his crew, that was the end of the good experience. After blowing us off for an extended period called a meeting to go over numbers. Numbers he didn't have. After explaining how cheap we were generalized the numbers. Not only was this offensive but we hadn't even discussed numbers with him. We wouldn't hire or recommend to anyone we knew.

Extremely helpful and professional. They are a pleasure to work with!

Everything went very well. They completed the roof and gutters right away and were very patient in dealing with the mortgage company, who held on to the insurance money for a very long time. The only negative was that we had agreed that my deck would be power sprayed and restained, but they cancelled on that. I was unable to find anyone else to do the work, we ended up having to do it ourselves.

Description of Work
roof and gutters

They did an excellent job. His workers were polite, they were on time and they cleaned up absolutely wonderful. I just can't even tell you, what a pleasure it was to work with this company. He's marvelous.

They did it quickly and they did a good job.

Description of Work
They replaced my roof.

Bruce Tall Construction did a great job and the roof looks awesome. Bruce was very helpful and took time out of his busy schedule of running a business to come by and take a look at the damaged roof, answer any questions I had about the roof and explained the insurance process to me so it made sense. He recommended the Malarky Storm Grey Shingle that he thought would look good on the house and he was absolutely correct. He also told me where I could go to in town that sold the shingles so I could see a full size shingle and the actual color, those tiny squares that roofers bring by as "samples" don't show you enough to tell what the heck it is going to really look like. When it came time to put the new shingles on Bruce personally worked with me again to find a time to fit me into their busy schedule. Other roofers that I had look at the house said it would be months before they could do it and one said they would try to get me in by winter. Bruce had his crew at my house in about a week, and it took about 2 days for them to take off the old roof on the house and garage and install the new one. I have had multiple comments on how well the roof looks and everyone loves the way they did the flashing around the chimney. His crew was friendly and cleaned up the mess when they were done.

Things went as planned and the people were very through, and detail oriented. They clean up was superb, they arrived on time and completed the job as was expected. I would recommend them for any home repairs and landscaping problems.

Description of Work
Provided new roof shingle, and metal, new rain gutters, and worked with my insurance and mortgage company.

We were very happy with the quality of the product and the professionalism of the crew. They were fast and worked hard and were respectful to me and my family. Thanks Bruce Tall Construction!

The job went well.Bruce kept me informed of the time and what he would be doing on that date. He did everything he said he would do, and then some. I found Bruce to be an honest man and excellent to deal with. I was pleased with his work and I would definitely use him again.

We do restoration services for property damaged by hail and wind storms. Locally owned and operated by long-time Billings residents. HAAG certified roofing inspectors. BBB. We work with the insurance company to get you a fair price for restoring your property.  …

RELY ON US FOR HANDYMAN SERVICES YOU CAN TRUST  …

For residential siding, window installation, and any other home renovation project, you’ll want to hire home remodelers with decades of professional experience and a commitment to exceptional service. K-Designers has all of that and much more, including quality products, affordable pricing, and easy financing options. We have garnered over 15 National awards for expert design, premium products, and quality craftsmanship. We have been ranked in the 'Top 5 Largest Remodeling Firms' in the Western U.S. for over 30 years running. We proudly honor the standards set by the National Association of Home Builders, Consumer Protection Bureaus, and Federal Trade Commission.  …

Bonded
Insured
All statements concerning insurance, licenses, and bonds are informational only, and are self-reported. Since insurance, licenses and bonds can expire and can be cancelled, homeowners should always check such information for themselves.To find more licensing information for your state, visit our Find Licensing Requirements page.
General Information
Free Estimates
Yes, there may be travel charges outside of Yellow
Eco-Friendly Accreditations
No
Payment Options
Check, Visa, MasterCard, PayPal
Senior Discount
15%
Emergency Service
Yes
Warranties
Ask for details

How is Bruce Tall Construction and Design overall rated?

Bruce Tall Construction and Design is currently rated 4.7 overall out of 5.

What days are Bruce Tall Construction and Design open?

What payment options does Bruce Tall Construction and Design provide

No, Bruce Tall Construction and Design does not offer free project estimates.

No, Bruce Tall Construction and Design does not offer eco-friendly accreditations.

Does Bruce Tall Construction and Design offer a senior discount?

No, Bruce Tall Construction and Design does not offer a senior discount.

Are warranties offered by Bruce Tall Construction and Design?

No, Bruce Tall Construction and Design does not offer warranties.

What services does Bruce Tall Construction and Design offer?