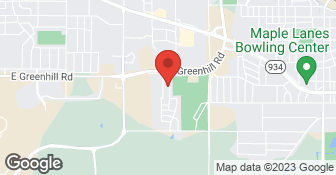 Offering residential all around handyman services. Contact us today for your free estimate! Accepting cash and checks. ...

The work he did was Horrible. He was late to begin with. What should have taken 3 days he only did in four hours which resulted in a bunch of work not being finished. He was extremely foul mouthed and unprofessional. Not to mention he was late on more than one occasion. He was dressed inappropriately. It is a good thing my grandkids were not around because he was extremely vulgar. Not to mention he started a brush fire without asking for permission. Wish he had not been hired. Payed him money just so he would leave.

Description of Work
Clean up yard from tree droppings from five large trees.

Description of Work
Does snow removal. After asking 3-4 times to not come unless it snowed 2 inches or less he kept coming anyway (when I was at work) and expecting full payment. Came one day after a 2 inch fall and I was out shoveling and he got sarcastic. Never again!

Description of Work
Power wash four condo patio decks and railings, painted (with spray paint ??? 24 cans before realizing it should be brush painted with gallon paint). He was a hard worker. He used lots of bad language, however, it is my opinion he suffers from some sort of behavior disorder. I was patient and worked with it. At least he is attempting to earn a living by "working".

They did lawn mowing. They did an adequate job. I would recommend them because of their price.

$25 of the $300 was for field rock that he was suppose to pick up and deliver and so far he hasn't delivered that either. Fire pit, he brought blocks he had, stacked in 3 row circle but they were not glued together so they keep falling over. He said he would be back the next day to do it, never showed. Pit could not be in the place he put it because of code, it needed to be 25 feet away from home. Pond wasn't dug deep enough for water fall to work, so I had to dig another foot deeper for pump to be covered with water and also had to move hand pump inside edge of pond. Wood chips were not placed around all of the fruit trees, they missed 2 3/4 and dump a huge amount on a flower bed in front yard. I have since moved chips from flower bed and put around trees. Pea gravel wasn't completely moved, left 1/2 and I have since moved another 1/4 with 1/4 left to move. They used my wheel barrel without asking and just left in yard. I have called him many times. Sometimes he is polite when I call and tells me he is really busy, has the rock and will finish fire pit as soon as he can. Next time he is foul mouth and very rude. Dave was actually hired to remove cement patio but when he came he wanted to use my tools. I told him I didn't have any and he left and came back with a sledge hammer. Well I am left with a 12 in x 12 in area that is a tripping hazard. I did have to leave for awhile and another person told me his pants were completely off when bending over and that person told him to cover up and he did.

Description of Work
Pick up and deliver $25 of field rock. Was hired to remove cement patio but ended up doing other yard work instead because he didn't have tools. Dug small pond, 6 inches deep, approximate 5 ft circle. Relocated a clothsline post and made a small fire pit in same spot, approximately 3 ft circle. Wood chips around fruit trees, shrubs and flower bed, picked up and delivered. Moved pea gravel from front of house to area by pond. Put hand pump that is attached to a pipe into ground a couple feet. Moved 5 ft shrub that has since died.

Description of Work
I hired Dave's Handyman Service the first of May to install chain link fence on two sides of my backyard. He quoted a price of $1,000 minus senior discount. Because of the rain we had in May, he was unable to start immediately - that I could understand. However, because of various "reasons", it took him a month to finish the job. Didn't buy enough necessary materials to do the job - had to make numerous trips to get what was needed; was sloppy, dropped pieces of wire in the yard, also a wrench - dangerous when mowing and when my grandchildren play in yard. When I told him about my son-in-law finding the wrench while mowing, his remark was, "well, that's why you always watch ahead of your mower when mowing." When I told him he needed to be more responsible, he just shrugged his shoulders. He used my garden hose and left it laying in the yard, water turned on, when he left for the day - twice. He would call, telling me he would be here a certain day and then not show up. I would change my schedule to be here, and I would have to call him to reschedule. He needed to splice the fencing which was a complete disaster! He said he would be back by the end of the week to redo it. When I said to do it correctly, he said yes. Haven't seen him since. My daughter called him to talk to him about all of this and he called her a "1st class b ". He is unreliable, unprofessional, not to mention rude.

Description of Work
Mowed and trimmed the lawn.

Dave was punctual and professional. He went right to work and took pride in his work.

Description of Work
Repaired a garage door that had blown out during a wind storm. Repainted front and back edges of doors.

Somehow they did a great job. What caught my attention were the foul languages that the handyman used when talking to the younger guy. He kept on yelling at him and so I talked to him, telling him that he's old enough to know better. And so he backed off a little bit. But overall, they did an excellent job on my garage.

I think he did a good job. He was very kind and courteous. He was friendly and easy to work and deal with as far as scheduling a time to come out.

Description of Work
Dave's Handyman Service repaired a rain gutter for us.

We have a landscape area. We usually call him to spread our mulch on it. He does good work but he is a little slow at it. His prices are pretty good.

Description of Work
We use Dave's Handyman Service for landscaping and handyman services.

On the first two visits all went well the weather stripping was replaced, he was on time and the price was good. He removed the bushes as I asked, and again he was prompt and the price was good. However, on the last visit, when I asked him to put together an entertainment center, it was not good. He had problems from the beginning and started to cuss-loudly. He finally got so frustrated with it that he told me he couldn't put it together. Later, when I tried to put it together myself, I found 2 places where the unit had been broken. He won't be back to my home.

I called him on Saturday. He came over on Sunday to give me an estimate. We set a date and time and he arrived promptly on the decided day. He worked quickly. The complete visit took less than 2.5 hours. I was satisfied with his work. His estimate was very reasonable. I was pleased to have the work done and the house looking so nice.

Description of Work
Dave's Handyman Service Waterloo , IA 50702 He did everything he said he would do. He did it in a timely manner. He cleaned up his mess when he was done. The work met my expectations.

At J Christensen Painting & Home Repair we specialize in interior painting and small home repair projects. Attention to detail and treating your home as if it was our own is priority on every job. Being an owner operated small business means you will be dealing with the same person the entire job & building a trusting relationship with the owner of the company.  …

New Generation Concrete is owner operated with over 12 years of quality experience in the concrete industry. I am on site for all jobs and I ensure all customers are satisfied before we finish up. We look forward to serving you!  …

Superior Pros, LLC. is a locally owned and operated Drywall/ Painting/ Siding/Windows & Doors contractor working to keep Iowa fresh and colorful. We serve residential and commercial clients with a commitment to consistently delivering the highest quality services at fair competitive prices. We only use the best tools and materials and employ the best the industry has to offer. Every member of our team has a proven track record of excellence and experience and knows how to utilize tried and true techniques to produce innovative styles and unparalleled quality. Painting is an art and your space is a canvas full of potential. We love helping our clients bring new life to the space that surrounds them.  …

Insured
All statements concerning insurance, licenses, and bonds are informational only, and are self-reported. Since insurance, licenses and bonds can expire and can be cancelled, homeowners should always check such information for themselves.To find more licensing information for your state, visit our Find Licensing Requirements page.
General Information
Free Estimates
Yes
Eco-Friendly Accreditations
No
Payment Options
Check
Senior Discount
10%
Emergency Service
Yes
Warranties
No

Dave's Handyman Service is currently rated 3.5 overall out of 5.

No, Dave's Handyman Service does not offer eco-friendly accreditations.

No, Dave's Handyman Service does not offer a senior discount.

No, Dave's Handyman Service does not offer warranties.