A Bright Idea: Breaking Down How Sundials Work to Tell Time

Nowadays, sundials are mostly decorative pieces to liven up your garden or patio area, but they have a rich history, dating back to the ancient civilizations of Egypt, Greece, and Rome. And while you may love the look of it, you may be wondering how in the world it works to tell time. Read on to learn about the evolution of sundials, their various parts, and how you can actually use one to tell the time while working away in your springtime garden.

How Does a Sundial Work?

First, let’s go all the way back to science class and talk about the relationship between the sun and the Earth. As the planet orbits around the sun, a shadow is cast.

A sundial is designed so that the shadow cast quantifies the Earth’s position in relation to the sun. This tool allows you to know the time of day or night—like a clock without mechanical hands. It is the earliest known timekeeping device, dating back to about 3,500 BCE. The versions of sundials at that time—called gnomons—were very rudimentary, with simply a long stick or pillar set up to cast a shadow, the length of which indicated the time.

A more advanced version, known as a shadow clock, was developed by the Ancient Egyptians around the 8th Century BCE. With a stronger knowledge of geometry, the Greeks developed more complex sundials; one, called the Tower of the Winds, contains several planar sundials that face different cardinal points of the compass.

While sundials were a major invention, they were imprecise. They could not adjust for the sun’s irregular movement or adjust for the sundial’s location; they can be as much as 30 minutes off from the actual time.

Thanks to the invention of modern clocks, we no longer need sundials to tell time. Clocks have made time regular, running at the sun’s average (or mean) rate for the year. This is known as mean time, which led to the standard of Greenwich Mean Time, or GMT. Even still, having a sundial in your yard is a beautiful blast from the past, even if it isn’t as accurate as your clock radio. 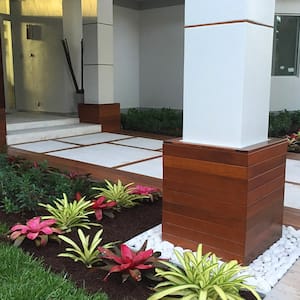 Transform your yard landscaping on a budget with these ten simple ideas.

The Parts of a Sundial

The round, flat area of a sundial is called a dial plate and is typically made of metal, wood, stone, or other hard material. There are numbered lines on the dial plate that mark the hours of the day.

The gnomon (just like that early timekeeping device) is a stick jutting up at an angle from the dial plate. It has a sloping edge, called the style. As the hours pass, the gnomon's shadow moves around the dial plate, marking new hours as it lands on the numbered lines.

Calculating Clock Time From a Sundial

A sundial can be a beautiful decorative object for your garden that offers an important function (don’t want to work in the garden past noon but want to leave all your devices inside? Check your sundial!) Here’s how to use your sundial to tell time.

1. Make sure you place your sundial on a flat surface that receives sun all day.

2. Find the center of your time zone. Check how far ahead or behind your clocks are from GMT. For every hour you are behind, your time zone shifts 15 degrees of longitude in a western direction and 15 degrees eastern if you are ahead.

3. Note the location of the shadow on the sundial. It should fall on a numbered line, indicating the time of day.

5. Adjust for daylight savings time if necessary by adding one hour to your calculation.

If you think a sundial could be a useful addition to your garden, you can speak with a local backyard design pro who can help work this into your current landscape.