How Much Does It Cost to Install an Outlet in an Unfinished Basement?

The cost to install an outlet in an unfinished basement is hardly shocking, though you may have to splurge on a ground fault circuit interrupter (GFCI) receptacle. Luckily, it doesn’t usually cost much more than a standard outlet. The average cost to install an electrical outlet is $210, though it can cost more than $2,200 if you need extensive electrical work. Here’s a cost breakdown.

How Much Does It Cost to Install an Outlet in an Unfinished Basement per Outlet?

How Much Does It Cost to Install an Outlet in an Unfinished Basement by Outlet Type?

Most unfinished basements require GFCI receptacles, but sometimes, you’ll find a high-voltage outlet for a clothes dryer. Each type of electrical outlet has a specific cost.

Ground fault circuit interrupter receptacles are the standard in unfinished basements. GFCI outlets are designed to prevent electrocution by cutting power when there’s an abnormal or excess flow of energy. Each GFCI receptacle costs about $7 to $25, not including the installation cost, which is just a little bit more expensive than a standard outlet.

Hardwired smart outlets generally cost $25 to $50, but they don’t have GFCI protection. Instead, if you want to use your smartphone to control the electrical system in your unfinished basement, you’ll need a smart plug for your GFCI outlet. These typically cost $15 to $40 on top of the outlet installation. Once you get the outlet installed, you can plug the smart plug in yourself.

A standard two-prong or three-prong outlet costs $3 to $5, excluding the installation cost. Though this type of outlet is commonly installed during the basement finishing process, it’s not common in an unfinished basement. Standard outlets often go against the National Electrical Code, a benchmark for electrical safety set by the National Fire Protection Association (NFPA), which sets the codes and standards for fire safety in the U.S. 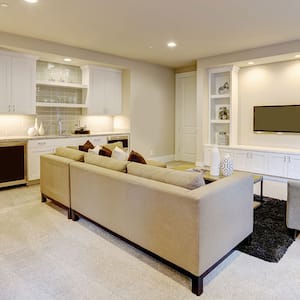 How Much Does It Cost to Finish a Basement?

Factors That Influence the Cost to Install an Electrical Outlet

The cost to install an outlet in an unfinished basement is usually less expensive than elsewhere in your home. Though the physical outlet might be more expensive, your electrician won’t have to cut open the wall, patch it up after the installation, and repaint it. This can save more than $500 on the cost of drywall repair and refinishing. Nonetheless, other factors could drive up your total cost.

If you’re installing a floor outlet in your unfinished basement, you’ll need a floor box to protect the outlet from moisture. A box kit, including the moisture-proof outlet cover, will cost you an additional $30 to $50.

Not all outlets are equal. Standard outlets are inexpensive, but you’ll pay $10 to $17 more to get an outlet with USB ports. A smart plug can be controlled through a control hub like Amazon Echo or Google Nest and will cost $15 to $40 on top of the outlet installation.

Sometimes, your electrician will need to fix or install electrical wiring in your home before they can install an outlet in your unfinished basement. If you have an older home, you may want to install grounded outlets or a GFCI circuit breaker. You may also need to upgrade your electrical panels so they can handle heavy-duty appliances. This can add significant costs to your project. Some additional electrical expenses might include:

GFCI outlets cost $4 to $20, more than a standard outlet. Even if you plan to have a finished basement one day, most outlets in unfinished basements require GFCI protection per the National Electrical Code. The only exception is if:

If you plan to finish your basement, you may want to childproof your outlets. Tamper-resistant (TR) receptacles cost $0.50 more than traditional receptacles.

Like other renovation projects, the cost to install an electrical outlet can be broken into parts and labor. Labor is usually the largest cost factor.

On average, the cost to hire an electrician is $40 to $100 per hour. The more extensive the electrical work, the more you’ll need to pay. Since this varies, it’s best to get a cost estimate from your contractor.

How Much Does It Cost to Install an Electrical Outlet Yourself?

The cost to install an outlet yourself amounts to little more than the direct cost of the outlet and basic tools like a wire cutter. You can get most of these items from a hardware store, but that doesn’t mean you should attempt a DIY.

Electrical work is dangerous if you don’t know what you’re doing. According to the NFPA, faulty electrical work leads to the deadliest type of home fire. Instead of messing with your home’s electrical wiring, hire a top-rated local electrician who’s licensed and insured. In this case, you’re better safe than sorry. 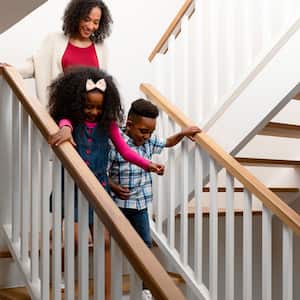 Unleash the potential of your extra square footage

FAQs About Installing an Outlet in an Unfinished Basement

How can I save money installing an outlet in an unfinished basement?

Sometimes, the installation is so simple that an electrician will charge a minimum fee. This is particularly true if you’re installing a replacement outlet. In this case, you can save money by installing multiple outlets at the same time.

How long does it take to install an electrical outlet?

What other projects should I do while installing an outlet in an unfinished basement?

If you have an older home, you may want to upgrade the amperage to handle modern appliances. You can also install a dedicated circuit if your breaker trips more frequently. If you haven’t already, you may also want to install GFCI outlets in other areas of your home where it’s required, like your bathroom or kitchen countertops.

Should I also install a GFCI circuit breaker?

A GFCI receptacle protects the single outlet. A GFCI circuit breaker protects everything connected to the circuit. If you need to create a new branch of circuits for your unfinished basement, a GFCI breaker is a great option. However, it may not work correctly with old wiring, so a GFCI outlet might be your best bet. Ask your electrician to advise on your specific project.