How to Keep Deer Away From Your Landscaping

When deer are hungry, your landscape's plants and flowers begin to look mighty tasty.

It's a year-round problem for those living close to wooded areas.

Before you know it, the arborvitae, yews and many other trees and shrubs start to look misshapen or gnawed to nubbins. Even deer-resistant plants become vulnerable when food options wither away.

In spring and summer, deer are more likely to go for the easiest food source available, turning your vegetables into theirs. Some plants, such as hostas and tulips, get chomped to bits.

Even bird feeders are not immune — deer have been spotted standing on their hind legs, slurping up seeds.

When winter arrives and the normal food sources are scarce, deer will also wander into the yard in search of something to eat.

CHECK OUT: A Comprehensive Guide to Plants That Discourage Deer

Noises and smells can deter deer

One of the most common methods to help keep deer out of your yard is through the use of auditory signals. These are activated when animals trip sensors.

Deer repellents can work in many ways — deterring animals with smell or taste are options. Fencing is often considered the most effective, but it needs to be at least 8 to 10 feet high. Lastly, there’s lethal intervention or hunting.

Bartlett Tree Experts in Plymouth, Minnesota, uses three different repellents for home landscapes, depending on the season and homeowner’s preference. For two of them, you might want to hold your nose.

The first option to help keep deer out of your yard: Use predator urine, such as coyote or wolf, which is sprayed on trees to deter bucks from rubbing their antlers on them.

Another option is to apply a chemical called Buck Off! in the summer to keep deer away from ornamental plants.

A method used in winter is to apply DeerPro to plants, which is a taste-based repellent. The latex base reduces the number of applications to one or two.

“It does not have a smell,” Heaton says, but it may discolor foliage.

If you want to get a little creative, try installing a motion sensor to an existing sprinkler system.

It is then fed to an irrigation valve that will open when the sensor is triggered, Wallace says. You can have one sprinkler on the zone or an entire zone of existing sprinklers.

The impact style pop-up head moves very fast and the ratcheting sound is enough to make anybody or anything jump out of the way when it pops up suddenly.

The motion sensor Wallace uses has a 70-foot target range and a span of 180 degrees.

To minimize the deer from eating landscaped plants, neighborhoods can create a buffer area around the community where trees, shrubs, grasses, perennials and other native species favored by deer are planted as a food source, Arnold says.

Fences are considered the best defense in your yard, but many neighborhoods have covenants that ban them or limit the type of fence that can be installed.

Temporary fencing strung around the perimeter of the problem areas might be an option, but it can create aesthetic issues, says Dirk Shearer, co-owner of The Wildlife Control Company in Dublin, Ohio.

Shearer has used repellents, but has witnessed them be effective on one property and not on another.

“At the end of the day, though, the best method to get really good deterrence is a fenced-in yard,” he says.

Editor's Note: This is an updated version of an article published Jan. 30, 2013. 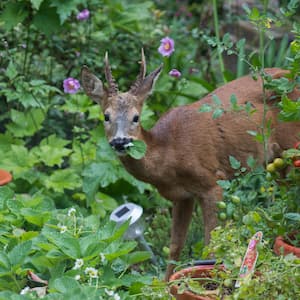 How to Keep Deer Out of Your Garden: 8 Humane Methods

Steer deer away for good