How to Spot 5 Common Types of Skunks

When it comes to skunks, their reputation—and certainly their hard-to-remove smell—precedes them. While they all share the ability to produce that identifying odor, there are many different types of skunks, ranging from spotted to striped to hog-nosed. Use this guide to help you spot and identify the most common species of skunks in the U.S.

What Do All Skunks Have in Common?

There are many different types of skunks, but they all share some common characteristics. Here are some of the common skunk behaviors and traits: 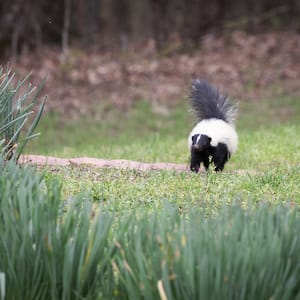 How Much Does Skunk Removal Cost?

The average skunk removal cost is around $450

The striped skunk is the most common type of skunk in North America. According to the National Wildlife Federation, they are highly adaptable and abundant—for every square mile you can find anywhere from five to thirteen striped skunks.  This species of skunk has adapted to thrive in almost any environment, from heavily wooded areas to urban settings. Their resilience comes, in part, from their ability to scavenge (and digest) a wide variety of foods, including human garbage, insects, and plants. They can even adapt to a desert climate, but their favorite habitat is suburban neighborhoods that have plenty of trash cans to scavenge.

The striped skunk is also highly recognizable (think Pepé Le Pew or Flower from Bambi). When identifying the striped skunk, look for black fur with a prominent white stripe or stripes down their backs. Striped skunks are around the size of a cat, and you will most likely see or hear them rooting through your garbage or compost at night.

Often mistaken for striped skunks, hooded skunks live primarily in Mexico and the southwestern United States, including southeastern Arizona, southwestern New Mexico, and southwestern Texas. According to Texas Tech University’s Natural Science Research Laboratory, this white-sided skunk prefers to live along stream courses, particularly on rocky ledges or among streamside vegetation. These skunks love to eat insects and food waste, and they’re usually spotted on the hunt just after sunset.

Hooded skunks are bigger than their striped cousins, typically between 22 and 31 inches long. The species also has quite a lot of variation in terms of the striped patterns on their fur. They usually have a ruff of white fur around their necks, which gives them a “hooded” appearance. Any of the following fur patterns can occur on hooded skunks: primarily black fur with two stripes running down their backs to the tail, primarily black fur with one large white stripe running down the middle of the back through the tail, and a combination of one large white stripe and two smaller white stripes, all running down their back and tails. Hooded skunks can even morph their fur patterns depending on their age or desire to attract a mate.

Although the Eastern spotted skunk is common in the eastern regions of North America, they can be seen as far north as Minnesota and as far south as Central America. Unlike other types of skunks, they prefer denser wooded areas to suburban or urban environments, so you are less likely to see them in your yard. However, the males, in particular, wander during mating season—primarily March and April—so you’re most likely to see this type of skunk in urban or suburban areas during those months.

You’ll know if you spot an Eastern spotted skunk on your property by the distinct, irregular black-and-white pattern on their backs that looks like spots or broken stripes. Their tails are usually white, and they typically have a white spot on their foreheads. They range in size from 18 to 27 inches long. You might also recognize their distinct “handstand” maneuver—the males stand on their front hands and spray (up to four feet) when threatened.

This type of skunk is primarily found throughout various habitats in the Western region of the United States. Like the striped skunk, Western spotted skunks are very adaptable and live in a wide variety of areas, ranging from the desert and the woods to urban forests and the suburbs. The Western spotted skunk is often mistaken for the striped skunk, but the main difference is that it’s smaller at only 14 to 18 inches long.

They typically have red, brown, or black fur with three white stripes that run lengthwise down the front part of their bodies, as well as three white stripes that run vertically on the hind part of their bodies. The stripes are so varied that it gives the appearance of spots. Some other identifying traits include short, round ears, a black tail with a white tip, and white spots between the eyes and below both ears.

The adult Western spotted skunks tend to be more solitary than other species. So if you see a lone skunk wandering at night with the specific “spotted” pattern, it’s very possible that it’s the Western Spotted Skunk.

This critter’s territory is in both Central and North America, but it’s primarily found in the Southwest region of the United States, specifically southeastern California, New Mexico, Arizona, and Texas. The American hog-nosed skunk is the largest North American skunk, extending between 17 to 37 inches long.

This type of skunk was named after its broad “hog-like” nose. It’s also referred to as the “rooter skunk” for its habit of rooting out food from under rocks and other obstacles. Sometimes, you can tell that a hog-nosed skunk has been on your property because there will be little patches of ground that appear plowed.

Hog-nosed skunks can be identified by their noses (if you can get close enough to see it) but also by the broad, white stripe that runs from the top of their heads all the way to their tails. The American hog-nosed skunk’s body fur is black, with an entirely white tail. 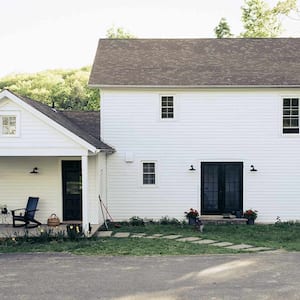 Have a Stinky Situation? These Methods Will Keep Skunks Away From Your Home