How Much Does Wasp Removal Cost?

On average, wasp removal costs around $375

While the sweet sound of bees buzzing indicates a healthy garden, the sound of a wasp can lead to panic and distress. Once you’ve spotted a wasp nest in or around your home, you’ll want to work quickly to remove it before someone gets a nasty sting. The cost of wasp nest removal will vary from $100 to $1,300 depending on the size, location, and type of wasp.

How Much Does Wasp Nest Removal Cost by Size of Infestation?

While one or two wasps may seem scary, dealing with a hive with hundreds of workers can be even worse. The larger the hive, the more difficult and time-consuming removal and cleanup will be.

For small hives of around 10 to 50 worker wasps, you’re looking at spending around $250 for extermination on average. Larger hives that have 50 to a couple of hundred wasps will be in the $500 range.

How Much Does Wasp Nest Removal Cost by Method?

If you’re determined to get the wasps off of your property, you can consider extermination or removal.

Wasps are commonly exterminated because they’re aggressive, the hive has grown too large to remove, or they’re causing damage to the home. But extermination is arguably the quickest method for exterminators, so you should expect to pay around $250 on average.

Removing wasps is a similar method to removing bees. However, wasp removal tends to pose a larger risk and will result in more aggressive attacks, so expect to pay around $400 for wasp removal.

How Much Does Wasp Nest Removal Cost by Type?

Not all wasps are the same. The three most common types of wasps include yellowjackets, hornets, and paper wasps, each with their preferred method of building their nests.

Yellowjackets pose the highest risk to safety and do their best to hide their hives underneath the ground. They’re typically aggressive and will attack even if unprovoked. Because of their hard-to-reach nests, large population, and risk of being stung and attacked, the cost of yellowjacket removal for a moderate-sized nest is around $500 to $750.

If you’re dealing with a yellowjacket infestation, then you should leave the removal or wasp extermination process to the pros. This avoids unnecessary risk to yourself in the form of the insects and the chemicals needed to eliminate them.

Hornets are not necessarily aggressive when away from the nest, but tend to be when the nest is nearby. The sting of a hornet tends to be a little more painful because of the size of its stinger. For hornet removal, expect to pay around $300 to $400 on average.

Paper wasps are typically the only wasp you’ll want to deal with on your own. These types of wasps are not necessarily aggressive and don’t tend to attack, even when near the nest. Because of their docile nature, removing paper wasps tends to only cost around $100 to $200 on average. You can also choose to leave them be. 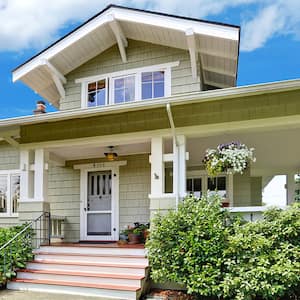 Besides the size of the infestation, you’ll need to consider factors such as the nest’s location, repairs needed, and the company you call to get the job done.

Before you can start the removal process, you’ll need a pest control company near you to come out and check a few things. These items include the extent of the infestation, where the wasps are coming from in the home, and any damage you may incur from removing them.

National chains often inspect for free but tend to cost more for the removal process than local companies. Contacting a pest control company near you is the first step to getting a personalized quote.

Again, the cost to remove a wasp varies depending on the type of wasp. Yellowjackets fall on the higher end of the price range, whereas paper wasps fall on the lower end. These price variations by type are due to the differences in each wasp specie’s aggression, population, and nesting habits.

Location of the Nest

While most people associate our buzzing neighbors with hanging from a tree or off the side of the house, not all wasps or hornets prefer to make their homes here. Some of them build inside your attic, in the walls, and even underground. If this happens to you, the local wasp removal company you hire will likely need to cut into different parts of the home, which could cause damages.

When thinking about wasps, it can feel intimidating—if not downright terrifying—to think of tackling a large nest. The last thing you want is a swarm of yellowjackets chasing you around the yard. Keep the size of the nest in mind when you’re factoring in total costs, as it’s far easier to remove a paper wasp nest in the early stages of the building process than it is to remove a large, elusive hornet nest.

For some wasp removals, it’s just a matter of removing the nest and giving the wasps time to build elsewhere, but for other removals, it requires a bit more effort and prevention treatments to discourage their return.

Your pro might need to spray the nest with aerosol or a concentrated pest control liquid, which costs around $125. For nests in hard-to-reach parts of your home’s infrastructure, they might even need to use a specialized vacuum to suck the insects out of the space, which costs approximately $250.

Preventing wasps with monthly wasp treatments after the removal process can cost anywhere between $40 to $70.

Wasps can cause damage, which could mean repairing beams in the attic, fixing a hole in the wall, or resodding the area where pros dug up the nest. Repairs can range from $300 to $1,000, depending on the type of repair.

How Much Does It Cost to Remove a Wasp Nest Yourself?

First, a word of caution: Dealing with any type of pests that can sting you can run a risk of injury. You’ll only want to tackle wasp removal yourself if you really know what you’re doing, and even then, there is, of course, always a risk you’ll get stung.

If you’re dealing with a small nest, this may be a project you can handle yourself, so long as you’re not allergic and don’t mind the possibility of being stung. Again, you’ll want to exercise extreme caution. You can then opt to use insecticides to deter them from coming back. You’ll want to follow a few tips for safely removing a wasp nest to ensure you don’t get stung as well.

For chemicals, expect to pay around $12 on average for a spray and around $15 for dust. The spray is the direct insecticide you’ll use on the nest and surrounding areas. The dust is used for entry points to stop the insects from entering or leaving.

You may also need protective clothing if the hive is big enough, costing around $100 extra. But it’s worth it if you want to avoid getting stung.

Most of the time, though, you’ll want to call the pros to help you out, especially If you have an allergy to wasps or you’re unsure if you’re seeing wasps or bees. Bees are a vital part of the environment, and accidentally messing up a hive can negatively impact the environment around you. Plus, wasp removal can be a dangerous and painful situation, especially if you’re not sure what you’re doing. 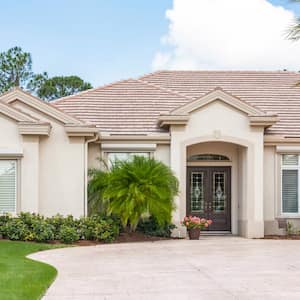 7 Tips for Removing a Wasp Nest From Your Property

Not every wasp nest around your home needs removing, but when it does, you can save yourself some stress by following some sensible steps

How do you keep wasps out?

You can prevent wasps from returning by having follow-up visits with the professional you call. If you don’t want to harm any more wasps, consider adding a fake nest to a tree or the house. These nests deter wasps from building around your home.

Since wasps aren’t as effective as pollinators and don’t produce honey, it’s unlikely you’ll find someone to rehome the wasps for free.

How soon should you call for wasp removal?

If you have an allergy to wasps or bees, call someone ASAP.

Should you leave the wasp nest alone?

If a small hive is far enough from your home and doesn’t seem to pose a threat to the health of anyone, then you can opt to leave them alone. They are still pollinators, and if you have a garden, they’ll tackle some of the work for you.

Though it might look like the same wasps keep returning to your home year after year, most wasps do not return to the same nesting site. Instead, it’s far more likely that your home is attractive to wasps, encouraging different wasps to nest there come nesting season.