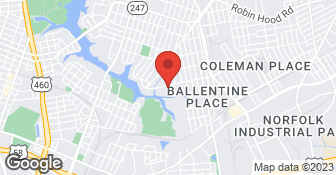 I am a small company with 2 employees. I am available to be a sub on most major projects.

The service with him didn't go too well. He didn't do what I asked him to do. It ended up costing me a lot more money to get my yard fixed. I wanted to wait to do the job, but when I called, he said he was in a meeting and couldn't talk. When I got up the next morning, he was already digging up the yard. He had already started. He dug it too deep in two places and it rained and it was like two oversized puddles, right by the foundation. When I confronted him about it, he said he had to dig it deeper because there were roots there. The deal was that he was going to make my land slope towards the street, so the water would run off. Well he didn't do that. All he had to do was get some dirt and put it in the two spots that were real low, and everything would have been fine. I had to get two pallets of sod put down instead. I had to pay another $750 to get it fixed by someone else.

Description of Work
I was supposed to get my lawn graded.

We specialize in removal of all unwanted items, junk hauling, yard debris removal, trash removal, and more! We guarantee your satisfaction, and we won’t leave until the job is done right. We pride ourselves on the quality work we provide, while delivering great customer service! Check out all the services we offer below and call -or- click to schedule a free estimate today!  …

Junk and trash hauling. Owner operated so I have the flexibility to meet your budget and time restrictions. Call or text 7573359624 for a quote. We guarantee your satisfaction and we won’t leave until the job is done right. We pride ourselves on the quality work we provide, while delivering great customer service! Check out our services offered and call or click to schedule a free estimate today.  …

True Clean USA offers junk removal for residential and commercial customers. Our company was founded by residents here in the Norfolk area. Our Owners have extensive experience in The Armed Forces, Real Estate, Property Management, Residential and Commercial Cleaning and 20 years in the Refuse industry. These experiences coupled with professionalism and a desire to provide TRUE quality service is passed onto our clients. Simply put, “We get It Done” Here at True Clean USA Junk Removal we are focused on providing a great service at an affordable price. We are a full-service junk removal and debris removal company providing quality service to residential, industrial, and commercial clients. We will remove your junk and debris no matter where it is located on the property. Basements, attics, in the rafters, or crawlspaces. We are prepared for it all.  …

Insured
All statements concerning insurance, licenses, and bonds are informational only, and are self-reported. Since insurance, licenses and bonds can expire and can be cancelled, homeowners should always check such information for themselves.To find more licensing information for your state, visit our Find Licensing Requirements page.
General Information
Free Estimates
Within a 20 mile radius
Eco-Friendly Accreditations
Yes
Payment Options
Check
Senior Discount
15%
Emergency Service
Yes
Warranties
Ask for details

My services include clearing of lots, acreage and residential property including stump removal. We can replenish waterfront property to include soil, stone and broken concrete. Haul topsoil, stone, gravel, sand, mulch and crushed concrete.

How is Tidewater Excavation overall rated?

Tidewater Excavation is currently rated 2 overall out of 5.

What days are Tidewater Excavation open?

No, Tidewater Excavation does not offer free project estimates.

No, Tidewater Excavation does not offer a senior discount.

Are warranties offered by Tidewater Excavation?

No, Tidewater Excavation does not offer warranties.

What services does Tidewater Excavation offer?

Tidewater Excavation offers the following services: My services include clearing of lots, acreage and residential property including stump removal. We can replenish waterfront property to include soil, stone and broken concrete. Haul topsoil, stone, gravel, sand, mulch and crushed concrete.