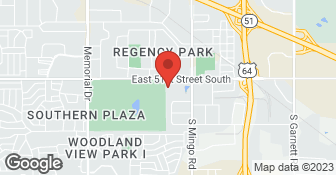 Birkes Construction Company, L.L.C. has been in business in the Tulsa, Oklahoma area since 1998 and has maintained an A+ rating with the Better Business Bureau (BBB.) We are a fully insured firm that specializes in all facets of construction...from partnering with you and working with insurance companies on your behalf as a result of damage due to natural disasters such as water, wind and fire damage, to remodeling an existing structure, to building brand new construction. We also offer emergency response services 24 hours a day, 7 days a week and a 5 year warranty for all of our clients. We take great pride in building and remodeling many residential and commercial properties here in the Tulsa area (as well as other areas in Northeastern Oklahoma), and we would love to show you examples of our work here in town...just ask! We distinguish ourselves by working hand in hand with our clients and providing the best workmanship in the industry. We will work with you as a team to ensure that your property is returned to its original condition (or better!) in an efficient and professional manner, or...let's build something new together! Please browse our website at www.birkesconstruction.com to learn about the different services we offer. If you have any questions concerning our services please contact us at: (918) 712-8453 or katie@birkesconstruction.com...

brandon birkes rarely showed, took from June until December 2016 to get back into home. lied in the contract, charged 1000s for work not done, created another flood into an outer wall, improperly laid all travertine, lied extensively and refused to correct any errors. 3 years later he sued me for 5k which i tried to withhold in an effor5 to get him to please fix his horrible work. Subsequent contracrors have indicated that the entire master bath will have to be gutted to properly renovate the master bath. Many many photos upon request. Additionally, my husband and i removed all hardwoods, and most carpet and much if the master bath to try and help contractor . His partner at time indicated alcoholism as what caused this and problems at many other jobs. please, run!!!

Description of Work
a flood covered by insurance (approx 50k damage) and we hired them to update entire rest of home.including a conplete remodel of master bath (another approx 50k)

It went well. Work is high quality and the Birkes staff and subs were prompt and polite. Drywall repairs to ceilings and walls are near invisible and the painting was very precise. Plumbing and electrical work went without a hitch and the flooring repair is excellent.

Description of Work
Restoration to my condo after flooding from an upstairs unit.

The initial assessment went well. After the first half of the payment was made, things went down hill: 1. They did not provide any regular follow-up. 2. When trying to get a status on the repairs, we had to call the project manager at least twice and wouldn't get a call back for at least three days. 3. After we were told the project was completed, we found that trash and debris had been left in the home and not hauled away as agreed upon. 4. Birkes continuously threatened us with litigation for non-payment, even though they had not finished the repairs. 5. We had to call and remind them repeatedly to finish up the repairs. 6. They lost the key we gave them to our house and failed to tell us. This added to additional delays in getting the repairs done. The key was never found. If the opportunity were to present itself again, I would under no circumstances use Birkes Construction. Even if it caused additional lead time to start, I would make sure to shop around. They have a triple A (AAA) Better Business Bureau rating, which means absolutely nothing.

Description of Work
We had water damage in our home due to a frozen pipe. Almost 50% of the home needed repair work.

Why Choose Restoration 1 of Tulsa? We are a locally owned and operated business with over 15 years experience plus have the backing of a national brand in the Restoration Industry for Fire, Water, Smoke, & Mold Damage. When disaster strikes, its important to enlist help from a company you can trust. At Restoration 1 of Tulsa, we are committed to the client and excellent service in every aspect. This means getting our restoration specialists thoroughly trained & professionally certified while staying up to date with the latest property restoration techniques and technologies. We are certified IICRC and are committed to our clients. 100% Satisfaction Guaranteed Committed to the Client 24/7 Availability Licensed & Insured These things alone differentiate us from other property restoration services who may be tempted to cut corners or hire under qualified personnel. Our professionals are certified by the Institute of Inspection, Cleaning and Restoration Certification (IICRC) and the Indoor Air Quality Association (IAQA). All our services are backed by our commitment to your satisfaction. Emergencies don't wait around and neither do we. You can expect prompt and effective services from our fully trained technicians.  …

With over 45 years of combined experiences, we specialize in Lawn Irrigation and Landscaping services. We work on all brands of Sprinkler Systems and we respond to our repair requests in 24-48 hours! We guarantee your satisfaction, and we won’t leave until the job is done right. We pride ourselves on the quality work we provide, while delivering great customer service! Check out all the services we offer below and call -or- click to schedule a FREE estimate today!  …

Local Pressure Washing business offering professional services at affordable pricing. Training and safety is what sets us aside from others. We have highly trained technicians so you can count on the high quality courteous and professionalism you desire. We offer house washing, roof washing, concrete cleaning, decks and fencing, patio and walkway cleaning. We use industry standard and manufacture recommended cleaning methods and biodegradable soaps and detergents.  …

BIRKES CONSTRUCTION CO LLC is currently rated 2.8 overall out of 5.

No, BIRKES CONSTRUCTION CO LLC does not offer a senior discount.

Are there any services BIRKES CONSTRUCTION CO LLC does not offer?