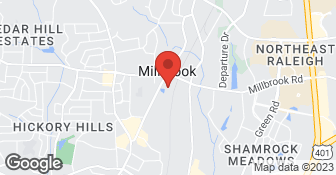 8 employees. No subcontractors. Service fee is $75 but only $39.99 for Angie's List Members. No extra charge for after hours or weekend service. You may contact us through email or at 919-500-5171. Also doing business as Precision Overhead Garage Door Service. Additional contact: Susan Grega. Award Winning.  …

Avoid at all costs. I've now taken a total of 6 days off work to have oven repair — either for diagnosis or part replacement. My oven is still broken, and I've been stood up for appointments two days in a row. I will never recommend a Sears Home Warranty contract to anyone. The process has been a nightmare and a waste of money. The last tech called to cancel and said I was selfish for needing him to send someone else (after being stood up two days in a row).

Scheduled service for refrigerator repair; received confirmation via email and phone call the night before confirming the service window time; no one called during that service window or showed up to complete the service; contacted the customer support service to see what had happened - the service was never routed to a technician - and they wanted me to reschedule! Never going to happen! And to top it off, they charge a $99 diagnostic fee and then don't show up at all. No wonder Sears is going bankrupt!

They sent someone within a half hour.

Description of Work
I use them for home warranty. They sent someone to fix something with my garbage disposal.

They did an extremely good job on it. I paid the Sears price, the normal price. It turned out when the guy got into that the dishwasher was warranty. I paid their price to come out and do the prep, just found out all the information and then they submitted it to the company to repair for the repair. Price was superb, because I didn’t pay it. What they did well was everything and something that they didn’t have to do, they didn’t have to searched for warranties, but they did. I’m not sure everybody would have even thought to do that. That is part of their practice. They seem very honest. If they are in business this time next year we’ll get them again.

Description of Work
They repaired a dishwasher for us.

Technician was upfront and honest that the repair costs would be more than buying a new machine. Since we've had the machine for almost 12 years, we agreed to replace.

Description of Work
Looked a washing machine to determine what was wrong with it.

Tech diagnosed issue and replaced a broken thermostat with new part. Checked heating was working correctly and reconnected hose, etc. Service was easy to arrange over the phone, and tech called when close to arrival time. Tech arrived within the expected time frame.

Description of Work
Requested service call to diagnose/repair electric clothes dryer that was not heating.

Jon, and his trainee (believe his name was Jared), were both great and were willing to take the time to explain what they were doing. They did the primary cleaning from inside the house since I already had the dryer pulled out of the laundry alcove, but they also went to the outside vent to make sure everything was clear and that there was a good air flow after cleaning. They both were very friendly, did a very thorough and professional job. I also bought a device called Lint Alert, which should indicate when the dryer vent is getting clogged again. I only do one or two loads a week and do not plan to have cleaning done as frequently as recommended. The actual cleaning cost ($149) plus $10 trip fee totaled $159 ; the Lint Alert installed was an extra $99, but I'm only listing the cost of the cleaning below. This service is provided by Sears employees and is not sub-contracted. I would highly recommend them, and I definitely plan to use them when I get ready to have my floor vents cleaned.

Description of Work
I needed to have my dryer vent cleaned out, since it was taking forever (sometimes 2 hours) to dry a load of clothes. Also, considering the amount amount of lint they got out, I was very likely in the fire hazard stage.

Our tech was a Quincy and he was extremely professional and did an excellent job. He paid special attention to my pet issues and made sure to use products that were appropriate for my house.

Called 30 min before arrival. Arrived on time. Inspected rooms to be done. Made suggestions-(politely). Did job quickly and efficiently. Very pleased.

David was great and helpful. he took the time to explain the problem. Terrific customer service. David was friendly and intelligent. Sears needs more employees like David.

Description of Work
diagnosed broken board and reprogrammed

Thank you for using Sears Garage Door! We appreciate your opinion on Angie's list.