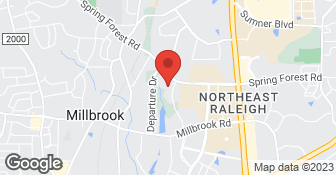 Dickerson Hearth Products is your full service FIREPLACE and OUTDOOR LIVING provider. Give us a call today for more information.

Dickerson reps were knowledgeable and professional. Work was performed on time and to expectations.

Demolition was very poorly done. The laborer was new to the company so he was just guessing as to how to remove the old fireplace. No judgement on him, I'm sure he did the best he could but my husband had to help. Therefore my husband spend the day helping this guy instead of working at his day job. My husband did the framing. Installation and arrival of fireplace went on time. But it was installed unleveled so we had to call them back and that seemed to put a wrench in the whole thing. After that we seemed to be put on the back burner. Startup didn't happen until December the 23rd, that's a month and a half after we started the whole installation. We were very weary at this point but glad it was over.

On July 17, Dickerson's serviceman could not identify the reason that condensation had suddenly appeared but indicated that there was no condensation-related defect with the installation or unit. He cleaned the glass screen which had become had become spotted due to the condensation. He found some sort of plugging in the pilot assembly that prevented lighting of the unit. After the plugging was corrected, the gas log lighted, wavered, extinguished, and relighted. Then, though several cycles, the gas log ignited and burned properly. All SEEMED well. Ten days later, on July 26, condensation reappeared and the log would again not ignite. I immediately called Dickerson and scheduled an a.m. appointment on August 1, 2013. After agreeing on that appointment date and time, I expressed my hope that there would be no further charge since the previous service date was so recent. The service scheduler would not make such a commitment but connected me with another person who was quite reluctant to absorb the cost of the second visit. However, after quite some discussion, this second contact said "...let me do some checking, I'll call you back...". I NEVER RECEIVED A CALL-BACK. The appointed time came and went (I waited around all morning) with no serviceman arriving). On August 2, 2013, I called Dickerson's office and spoke to the scheduler. She found no record of the agreed upon appointment but remembered my call AND the fact that I was to be called back. The scheduler indicated that she would find out what happened and that she would "call you back". Ten days later, still no call back. While I honestly feel that Dickerson should have made a followup service call at no cost, I am MOST DISAPPOINTED that Dickerson unilaterally broke my appointment without notice AND failed to make either promised followup phone call. That's not a respectful way to treat a customer.

Description of Work
Serviced an eighteen month old gas log which suddenly displayed a lot of moisture condensation and WOULD NOT IGNITE. Dickerson had originally installed the gas log and fireplace for the home builder.

Hill Dickerson came to my home and gave me an estimate for the work I wanted done. I am very happy with the finished product. The workers were on time, completed the job in a timely fashion, and cleaned everything up when the job was done. I had a warranty issue and Hill promptly resolved the issue and made sure everything was done to my satisfaction.

They take the order well enough - quick and easy with smiles all around. Then it goes down hill - FAST. I was promised 5 dates for delivery - each one was missed, and I was never contacted proactively. I had to call teh next day and find out what was going on. Finally, when delivery was made, it was missing multiple parts and was leaking from an bad and untested hose. They also failed to take away the old grill saying that they'd be back 'tomorrow'. Two more weeks of missed appointments to get the missing parts installed (how on earth can you miss installing pieces???), and another week to remove the old grill. Then of course they had to order a hose. (How can they not simply shop test the gear before bringing it out?) Two more weeks elapse. No calls from them. I called asking for an update, and they said they'd be out 'tomorrow'. Not quite, they missed that appointment. So finally, I was fed up, out a lot of money, I gave them the next day to install the hose or come and remove it. They came - in the middle of the night, no knock on the door, just invaded my back yard and deck and supposedly installed the hose. If I had heard noise out there, they'd have been arrested in a New York minute. Now they are threatening to sue ME if I pursue this matter further. I highly recommend that you skip this clown outfit. There are very good people all around the Triangle, these guys are not among them. Skip them.

Description of Work
Purchased a Vermont Castings Gas Grill, had it delivered and the old grill removed.

I had removed the brick fascia and hearth from my old fireplace and planned on installing a new one. I consulted with Dickerson to examine my options based on my budget. They came up with a solution that would get me the most for my dollar. John was accommodating to my schedule when it came to scheduling time for the estimate and there was no pressure to up-sell me to higher end materials/models for the sake of increasing the bottom line. John and his crew did an excellent job with the installation, and completed the job in a remarkably short time. They listened to what I wanted and delivered exactly that. I am very pleased with everything that was done and they cost was exactly as estimated. They insisted I let them know immediately if I wasn't happy with the results and promised to fix if necessary, but that was never an issue.

Description of Work
They installed a wood burning stove, damper, and flue. As well as slate hearth, and wood mantle surround.

We specialize in concrete leveling services and more! We guarantee your satisfaction, and we won’t leave until the job is done right. We pride ourselves on the quality work we provide, while delivering great customer service! Check out all the services we offer below and call -or- click to schedule a free estimate today!  …

FULLY INSURED NOAT Landscapes and Hardscapes is a Top Rated Landscape Construction company based in Raleigh, NC that puts our customers first by providing 5 Star Service for every project! We take pride in every project, caring for it as if it were our own property and taking the extra mile to ensure the customer feels confident knowing the job is getting done right the first time.  …

We specialize in residential hardscape design and installation. Whether you have a blank slate or you would like to enhance your yard's features, we are the company you have been looking for! Do you dream of an inviting grill area and entertaining patio? What about a beautiful walkway, fire pit or outdoor fireplace? We provide excellent service at extremely competitive rates throughout the Raleigh/Durham area. We take pride in our work and it shows from our work ethic to the final result! A beautiful yard is possible, let us help! Nicolas' Hardscapes & Drainage has been servicing the Raleigh, Durham and Chapel Hill areas for over 10 years. The company is owned and operated by Nicolas. We specialize in hardscape, drainage & grading design projects at extremely reasonable prices to meet your budget and needs. We warranty our hardscaping! Are you in the military or a veteran? Ask us about our military discount.**please note we do not pour or work with concrete.**  …

Dickerson Hearth Products is currently rated 3.5 overall out of 5.

No, Dickerson Hearth Products does not offer free project estimates.

No, Dickerson Hearth Products does not offer eco-friendly accreditations.