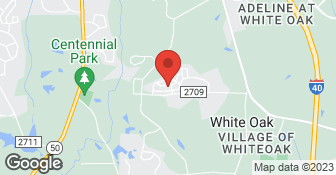 E.B. Plumbing focuses on getting the job done right the first time. If you are not satisfied, we are not done. If you have plumbing, you need a plumber. Call today for all your plumbing needs.

The problem was a clogged bathroom drain. The plumber, Mr. Brock, actually arrived early and in a reasonably short time from when he was first called. This was not an emergency so I wasn’t particularly concerned about that but I expect that in an emergency he would come accordingly. He worked quite some time on the drain and was talking thru other options with me when he finally got it open. He’s very friendly and did a good job making sure the drain surroundings were kept clean. I would have no problem calling him for a more complex plumbing job.

Description of Work
I needed a drain unclogged

I first called Eric to replace a kitchen sink faucet and I couldn't be more pleased. He worked fast and efficiently and was done before I had time to see how he was doing. When the master bath toilet was giving me trouble - I called Eric and I had the same wonderful experience. I have found a plumber for the life of my home.

The repairs were completed within an hour or less. Eric was professional and took care of all three of my plumbing issues with no problem. His service was outstanding and his price was very reasonable. I would highly recommend him. I will be calling him again in the future should I have other plumbing issues. A++

Description of Work
I needed my garbage disposal repaired/replaced, a toilet flush seal replaced, and a shower head unclogged.

Excellent. EB plumbing is professional, skilled, and pleasant to do business with. All options were clearly explained including advantages and disadvantages of each and costs. Workmen arrived promptly at the time promised and completed the job as outlined and on time. I will hire EB plumbing the next time I need plumbing services.

Description of Work
Installed circulation pump and small electric water tank to provide quick access to hot water at all sinks without waiting for hot water to make its way from the water tank to each tap. Installed electric wire from circuit panel to newly installed water heater.

It went well. I also really appreciate that Eric addresses any questions or concerns I have.

Description of Work
Past few years, it ranged from fixing leaky faucets to replacing expansion tank and hot water heater.

Description of Work
Eric Brock did a fantastic job installing a whole house water filter and a new water softener. He did it quickly and for a very reasonable price. His labor bill was half the quote I received from Lowe's

I've used Eric for minor plumbing repairs over the last few years. The only prior issue I've had was his slow response time but I continued to use him anyway. This past winter was tough on the exposed plumbing under my house. Eric fixed a cold water leak in February. A hot water leak unfortunately could also have been fixed at that time as well, instead of a month later, if Eric had listened more carefully to the "symptoms" I was describing and was less interested in texting his wife about their grocery list during my appointment. Eric returned in March to fix another cold water leak, plus the hot water leak. i also asked him to come in the house to check out the mildew I was seeing at the base of the commode in the master bath. He had one of his children with him that day; he told her to not take off her shoes and they both tracked dirt all over my carpet. Eric tried to tell me that the mildew at the at the base of the commode was from the water leak under the house, but anyone could figure out that it was probably a leaking wax ring - - guess he just didn't feel like pulling a commode that day. Eric completed the repair under the house, I paid him, and he left. I noticed two issues almost immediately (water pressure issue and another leak) and texted him within a few hours; he responded the next day which was fine and said he'd try to make it back that day but "couldn't promise anything." Not quite a month later, Eric ignored the final messages I sent but was happy to cash my check. His lack of interest in following up after a repair is totally unacceptable. Fortunately, a neighbor has connected me with someone who is both competent and professional.

Description of Work
Repaired hot and cold water leaks under my mobile home.

They gave a very timely response and reasonable prices. They were also very professional. I highly recommend them to others.

Description of Work
He replaced my kitchen sink faucet.

Quickly completed with a high attention to detail at a fair price.

Description of Work
Installed new hookups for water and sewer for a new sink location.

Eric was very professional and showed up on time. Got the job done quickly! Price was very fair.

Eric was fantastic. We were in the middle of selling our old home and needed a LOT of plumbing replaced and repaired. He did it all and was even pleasant about it. Working with nasty, old plumbing in a crawl space would certainly put me out of a good mood. He was easy to talk to and to keep in touch with. Eric came over several times (lots of work), took care of getting a permit and was willing to comply with the needs and answer questions our buyers and their lender kept coming up with. I would recommend EB Plumbing to anyone.

Description of Work
replaced most of our home's plumbing, fixed leaks, set up plumbing for relocated washing machine, and removed all old plumbing.

Eric was able to respond to my need for service on the same day, and he resolved the problem in a timely, professional, and reasonably priced manner. He will definitely be the one who I call first, when I have a plumbing issue.

Description of Work
Drained water heater and replaced one of the heating coils.

Well done and prompt arrived on time (from a reschedule they asked for). Even were nice enough to remove a dead snake that was under the house. No issues or hassels

Description of Work
Replaced a water pressure valve in my crawl space.

I contacted Erik to come and give me an estimate. He arrived on time and gave me an estimate. I told him I had been looking at the replacements and he told me to tell him which one I wanted and he would probably be able to get it for a better price. He was able to beat the price by $150 dollars for the new tub/surround setup and also was able to beat the price for the faucet by $20-$30. We setup a time for him to come and start the job. He did the demo and reinstallation in one day. He came back the next day and did the drywall work to repair the drywall that had to be cut in order to remove the old surround. He then came back 2 days later as arranged to sand and put the last coat on the drywall. Erik was polite, professional and priced very reasonably and saved me money. I have some other plumbing projects that will need to be completed and I will be using him again. Very honest!!

Description of Work
I had my one piece bathtub/surround removed due to a hole in it and it was replaced with a new 4 piece tub and surround as well as new shower faucet.

Excellent service. They arrived at time designated and worked all afternoon. Eric explained the neutralizer function to me and explained how to shut off the water when necessary. EB Plumbing has done several jobs for me and will be installing a new pressure tank soon. Eric and Jason are courteous, respectful and professional.

Description of Work
Relocated whole house filter from under house to garage for easier access and installed upflow neutralizer.

Very satisfied, would highly recommend his services for any plumbing needs........

Description of Work
Made emergency call @7:30 am to disconnect and drain leaking water heater. Installed new water heater and a garbage disposal @ later times. The owner was on the job, very professional, courteous and prompt. Always keep me up to date on work progress.

Family run plumbing company with over 27 years experience, 22 years licensed and insured. We have the experience and dedication to get the job done right! Specializing in Plumbing services; We guarantee your satisfaction, and we won't leave until the job is done right. We pride ourselves on the quality work we provide, while delivering great customer service! Call or click for your FREE estimate today!  …

Cape Fear Air Conditioning, Heating, & Electric Inc. is an air conditioning, heating, and electrical systems contractor with two locations to Serve You! Fayetteville, NC (910) 483-8790 and Raleigh, NC (919) 322-2000. We have been serving the Triangle and Fayetteville areas since 1973. Nobody knows Trane like we do...... We are the oldest Trane dealer in town! Our trained professionals sell, service and install all major brands as well. We repair and replace: Air conditioning systems • Heat pumps • Gas Package units • Heat Pump Package units• Duct systems • Gas furnaces • Air handlers • Mini Split Systems • Air cleaners • Ultra Violet Air Purification and Humidifiers We can provide our commercial and residential customers with affordable heating and cooling systems to fit their lifestyles and budgets. To better serve our customers, we offer 24-hour emergency service seven days a week. We also provide same-day service and repairs. Financing is available and we offer extended warranties! Cape Fear Air Conditioning & Heating Co., Inc. values your business and will work hard to maintain your complete satisfaction. Call us today to schedule service or request an estimate.  …

Comfort First Heating and Cooling takes great pleasure in being the friendliest, most caring and competent air conditioning and heating service, repair and installation company in North Carolina & Virginia. Our more than 20 years of residential and commercial experience gives us the confidence needed to boldly offer the most aggressive,thoughtful Written Guarantee in the industry. Everything we do, from answering your first call to seeing the savings in your electricity after our visit, is meticulously planned because we feel that every detail of your comfort is valuable. If you need air conditioning and heating service, repair or installation and live in central North Carolina, we have technicians locally that can serve you. Contact Us today to find the people and comfort you can count on! Financing is available and Military discounts.  …

How is EB Plumbing and Remodeling LLC overall rated?

EB Plumbing and Remodeling LLC is currently rated 4.8 overall out of 5.

What days are EB Plumbing and Remodeling LLC open?

What payment options does EB Plumbing and Remodeling LLC provide

No, EB Plumbing and Remodeling LLC does not offer eco-friendly accreditations.

Does EB Plumbing and Remodeling LLC offer a senior discount?

No, EB Plumbing and Remodeling LLC does not offer a senior discount.

Are warranties offered by EB Plumbing and Remodeling LLC?

What services does EB Plumbing and Remodeling LLC offer?