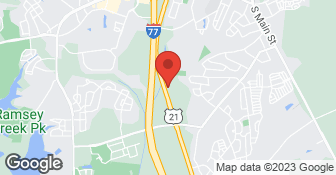 We were told of on install that it would take 4 or 5 days total to complete job. It took 6 days because installer worked by himself 2 of the 6 days (1 day just 4 hrs.). The reason on those 2 days one of the two installers was out. The one installer couldn't move any furniture even with my help, they refused. Flowers didn't have a back up plan for this in case someone is out. On the first day of install the flooring went down in our Den and I noticed defects in the wood. I stopped them and asked for their Supervisor to come out. He explained that they have had issues with this wood before. When we bought it, we were never told of any issues this wood. This Supervisor told his installers NOT to use any of the defective wood. But during the total install there are places where is was installed. They plugged these defects with colored match pudding. After finishing install, we had a lot of flooring left over. I asked about why there was so much and as of 01/09/21, no answer. We waited 1.5 months to save up money to do this install and we will feel that it was a let down on our experience with Flowers Flooring. Their lack of coverage to get our install down in a timely matter was the main concern. We even offered to use New Year's Day as day to help. They refused. Installer texted us at 10:18 am that morning that they were not coming. These are reasons for not recommending them.

Description of Work
Wish it was Better with Flowers Flooring

We had a terrific experience with Flowers Flooring. The estimator spent a good deal of time in the home showing us product and educating us on what would work best in our home. We have large breed dogs and grandchildren. The estimate was extremely detailed and outlined every single cost which we really appreciated. The crew was timely and got the job done in under the number of estimated days to complete. They cleaned up at the end of every work day and kept us abreast of the progress as they went. Very pleased with our new floors.

The whole experience from shopping in the showroom, getting the estimate, making changes, scheduling installation and the actual installation itself was remarkably smooth and enjoyable. The communication with every staff member and at each stage was clear, coordinated, and professional. A special thanks to Juan Baez for a beautiful installation.

Couldn't have gone better. Purchased 2000 square feet of solid Shaw hardwood. We could not be happier with the the quality of this product and the installation from Flowers Flooring. Thank you!

Our contractor hired Flower's Flooring to install flooring throughout our main level. The wood they sold us was one of the most expensive ones they had, and they promised it was strong and durable (with four kids, we were transparent with our needs). The wood immediately began to chip and peel in certain areas without any cause - in fact, our SOCKS were pulling up splinters of the wood. Socks... It took several weeks and dozens of phone calls to get them out to fix the initial dings. However, our floors that are a just a few months old look terrible :-( During installation, they shattered one of our large picture windows with their equipment. They did not offer to replace this. We have a very sloped driveway, and we told the installers (as did our contractor) several times NOT to park on our driveway. They did anyway, and while they were parked there their older-than-dirt van lost its transmission and crushed my BRAND NEW (with dealer tags) luxury SUV straight through our wrought iron fence. THANK GOD our kids were not outside when this happened. To boot, the owners NEVER called to apologize during this fracass. The insurance policy they initially provided us was lapsed, and caused a ton of undue stress to our family (I was 30+ weeks pregnant at this time). We never received an invoice for the balance due, however we did receive a certified letter stating that a LIEN was placed on our home! We owed around $4000 to pay off the balance, and they tacked on a lien for $6k! Our contract stated that they could only assess 5% interest if payments were not made, and they charged around 300%, which is completely illegal. How can a company place a lien on a home without even sending a bill or making a phone call to collect a payment??? This company is a complete trainwreck.... unprofessional, expensive, and apparently run by complete jackals.

Description of Work
Wanted wood floor installed, ended up with a nightmare

Had moisture issue and Flowers Flooring was the only company that was able to identify the problem. Tore out old flooring and replaced with new, beautiful hardwoods. Definitely recommend this company.

Excellent. Had water damage and crew came in to replace cupped boards then sanded and refinished entire floor.

Whole experience from start to finish was professional, timely, great quality work and perfect finished product. Premises cleaned up each day after portions of job were finished and then did thorough cleaning on last day. Kitchen was spotless. Highly recommend this company.

The job went very smooth. We hired Flowers Flooring to tear out laminate and replace with solid hardwood in the dining room and hallway of our home. The crew did a great job and I would hire them again.

Flowers Flooring did a great job matching existing hardwood in our master bedroom. Would certainly recommend. Extremely professional from start to finish.

🎯🎯🎯 SANDING AND REFINISHING FLOORS ONLY 🎯🎯🎯 Restoration of hardwood flooring - Quality floor finishing services Our capable and passionate team will work quickly and skillfully to sand and finish the wood floors of your home. Using leading edge technology and trusted brands, we will extend the lifespan of your wood floors, and bring them from dull and sad looking, to polished, smooth, and refined in no time at all. Barbosa Cleaner’s have a great reviews and references We work with house cleaning and offices . Call now for Free estimate!  …

How is Flowers Flooring overall rated?

Flowers Flooring is currently rated 4.6 overall out of 5.

What days are Flowers Flooring open?

No, Flowers Flooring does not offer a senior discount.

Are warranties offered by Flowers Flooring?

What services does Flowers Flooring offer?