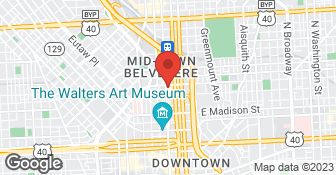 2 EMPLOYEES. NO SUBS. COST DETERMINED BY THE JOB. NO TRAVEL CHARGES. MAY CONTACT VIA EMAIL.

The good: He returned my call promptly and showed up quickly. He is also very friendly. The Bad: My wife had used him to clean our vents when I was out of town last year and I thought she was pleased with him, so I decided to be loyal and give him a call. After my experience, she let me know he was "only okay," and had "forgotten" a ladder so one of our returns in a hallway with an open ceiling never got cleaned. This time, when he started to clean the dryer exhaust outside, he seemed to initially get a lot out, but I knew his "cord" was too short. He said it was 20 feet, but it was 12 feet. How do I know? Because we were still getting a blockage code on our dryer. I asked him why he didn't go not only from the outside, but also the inside (to push anything out) and he said it wouldn't work that way. He looked for the exhaust tube in our basement, even though I TOLD him our basement is finished and he wouldn't see it. He said if the cleaning didn't work, we'd have to rip out our ceiling so he could disconnect the pipe and find the blockage. Instead, after he left, I measured the distance between the outer wall and the dryer hookup (17 feet) and made a trip to the hardware store and bought a duct cleaning kit with extension rods. I hooked up my shopvac and started doing the same thing he did. Sure enough, at about 12-13 feet I hit a blockage and started pulling stuff out. I ended up removing almost twice what he got out at the distance he went. After the blockage was removed, I also ran the brush through from the inside out(what he said was impossible) and got even more out. I truly think he was too ill-equipped to do the job. He needs more length on his cable because, after seeing how easy it is, I was able to do it with 20 feet of flex rod and the exact same brush he used. He also needs to listen to his customers. But he seemed more interested in telling me it couldn't be done and he knew better because he was "so experienced." Add to this: He was "having trouble" with his credit card machine, so a check (or cash) were my only options. Plus, his van wouldn't start after the job after he parked in my driveway and I had to give him a jump start... never mind my time as I had a call to be on. Seems like a nice guy, but I do not recommend him.

It was great, they got a little lost in the beginning, so they were a little late--they called to apologize and worked very quickly after they got there.

Description of Work
The company came to move all of my "larger furniture" for my recent local move. They moved beds, tables, chairs, file cabinets, bookcases -- very quickly and very professionally. A three man team, of very well-mannered gentelmen came to do the move.

The job was shabby at best. None of my concerns were addressed. The refrigerator still looked filthy, although over the telephone he claimed that the fridge looked brand new. Truly a disgrace! The bad thing is that I provided him my credit card info and he charged me for the work before it was officially (incomplete) complete. That was a mistake on my part.

Description of Work
I needed a vacant house cleaned. In addition to the whole house, I requested that they pay close attention to the refrigerator, windowsills, and cobwebs in the basement.

CUSTOMER MET ME AT THE HOUSE ON A SATURDAY MORNING (A USUAL DAY OFF FOR ME, BUT I STILL WOKE UP AND MET HER AT 8 AM BECAUSE IT WAS MOST CONVENIENT TO HER SINCE SHE LIVES IN DC), A FEW DAYS AFTER THE JOB WAS COMPLETE. SHE MENTIONED ABSOLUTELY NOTHING ABOUT POOR SERVICE, OTHER THAN SOME MINOR DUST ON THE WINDOWSILLS, ONLY FOR HER TO IMMEDIATELY SAY "OH, THAT'S NO BIG DEAL, I CAN TAKE CARE OF THAT." IF THE CUSTOMER HAD MENTIONED ANY OTHER CONCERNS TO US, THEY WOULD HAVE BEEN TAKEN CARE OF. HOWEVER, CUSTOMER SEEMED EXTREMELY SATISFIED WITH THE WORK AND GAVE US NO INDICATION OTHERWISE. WE ALSO PAINTED THE ENTIRE INTERIOR OF THE HOUSE FOR THIS SAME CUSTOMER, WHICH SHE DOES NOT MENTION HERE. SHE RECEIVED AN EXCELLENT PRICE FOR THE PAINTING, AND MUST HAVE BEEN HAPPY, BUT THAT IS NOT MENTIONED.

American Lawn and Tree Specialists, Inc. is a locally owned & operated company committed to providing the very best lawn care and ornamental tree/shrub care service to its customers. With over 27 years of experience, we offer free estimates where we can come out and evaluate your lawn and landscape. This is our basis so that we may provide you the service your lawn and landscape needs. Our Organic Based Lawn Care Program is proven in getting your lawn to its potential. Contact us today so we can get started improving your lawn.  …

Basement Waterproofing Nationwide has been servicing the Baltimore area since 1987. BWN has been turning damp and wet basements into dry basements without costly excavation. BWN is a licensed and insured, locally and nationally recognized basement waterproofer. We are the first basement waterproofing company to be awarded the Better Business Bureau's "Torch Award" for outstanding ethics in the marketplace, also being the only waterproofer to win that award twice. An Angie's list Super Service Award winner (2011 and 2012), BWN has the ability to permanently correct your basement problems at an affordable price. When it comes to trust you have come to the right place, we are family owned, family run, local business. We are not a franchise nor are we an exclusive dealer of any one product. As such, BWN is able to present you and your basement to the entire array of products and services available on the market today, allowing us to solve your wet basement problem with the right method at a price that's right for you. We offer a lifetime warranty to our customers, ensuring that your basement stays continuously dry. BWN is above all professionals, delivering excellence in the swift completion of each project.  …

Naturalawn of america is a locally owned and operated in maryland that has been in business for over 30 years. When you call our office during business hours, you will always speak with a live representative who is knowledgeable and ready to help you with all of your needs. We specialize in offering a safer organic based lawn care program that offers better results than typical synthetic programs. Our program is safer for you and the chesapeake bay.  …

No, CHARM CITY HOME SERVICES LLC does not offer a senior discount.

No, CHARM CITY HOME SERVICES LLC does not offer warranties.

Are there any services CHARM CITY HOME SERVICES LLC does not offer?