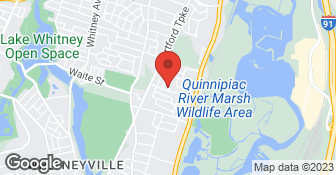 CL Home Improvements was founded in 1976 by Charles Lepper Jr. The company has been one of the most prominent home improvement and roofing contractors in the local area since it was founded. We pride ourselves in our excellent craftsmanship and impeccable eye for detail. Our crew is well seasoned and can complete any job with accuracy and precision. Give us a call if you have a home improvement need that you would like completed right the first time....

Kovacs Construction takes the time to understand what you want to accomplish and has the experience, tools, and know-how to do it right the first time. Windows, doors, decks, kitchens, or baths. Call or click to schedule a free estimate today!  …

Very well. Polite, respectful owners and workers, that did their jobs welland were on time. Clean up was done well; no hedges or flowers surrounding the house, were injured.

Description of Work
New roof and sone plywood applied. Two previous roofs underneath had to be removed

They are slightly pricey but are very dependable. Quick responses to phone calls!

I had been getting quotes on my roof because it was getting on and about time to replace, but the quotes were coming back a little higher than I'd have liked. I have a circa 30-square roof, so I knew it wouldn't be cheap - but it was looking like I might put it off just one more year. Then Chuck got back to me with what I considered a ridiculously low price, and he came well-recommended by my mum's boyfriend (and his neighborhood) to boot. When the crew came by on the big day, I was impressed. They had two crews working, hoping to finish in one day instead of 2-3, and had everything stripped before my morning coffee. There were a couple sheets of decking that had to be replaced, but nothing crazy, and in the "problem areas" of my roof ice and water shield was installed, rather than regular felt paper. The foreman was courteous, all documentation and permitting was provided and posted properly, and Chuck was there personally for part of the job to oversee everything. After they were done, I did a walk around a few times over the next couple days to see if there were any things I didn't like. A lot of the issues I had were minor, and largely aesthetic. Most of them had to do with the zinc strips I had them install - on one section of the roof, the corners were all bent up at the end of each strip. The strips never seemed to be installed the same way, either - they would stop a couple feet from the end of the ridge on one end, then run all the way to the edge on the other, and on the other side stop where the ridge vent stopped. A professional repointed and flashed my chimney, which was a complex job with many angles, for two more days after the roofing was complete, and it came out excellent. They can't have made money on the extra charge for flashing my chimney (I think it was around $700 of the total price). That said, I called up Chuck, told him I had a list of little things, and he came right out to wrap things up. I gave him the check for our remaining balance at this time. A couple months later, on the back of my house I noticed a sort of "hump" in the shingles running in a straight line from the bottom all the way up to the ridge. It took us a while (4-6 weeks) to get hold of Chuck to have him take a look, but he did finally give me a call back and apologize for the delay. On looking at the problem, he informed my mother (I wasn't home at the time) that it had to be because of the decking, and that since they didn't install any decking there that he wasn't going to send a crew in to fix it. I called him back and left a voicemail to contest this judgment a bit, and was surprised to find one of his best craftsmen on my roof the next day. The gentleman stripped up the shingles to see what was going on, and found that my plywood decking wasn't staggered where the "hump" was - there was a vertical seam there running all the way to the ridge. This made sense to me, because my home had an addition put on it many years ago, and likely they didn't pull up the old decking at that time to stagger the seams. He applied ice and water shield to the problem area, reinstalled the shingles, and assured me it wouldn't leak over the winter, and if I was lucky the hump wouldn't reform after he set everything back in place. I was, however, disappointed to find that this defect had gone completely unnoticed when the roof was stripped bare. It also would have been a great opportunity on their part (I wish I had thought of this myself while they were still here), what with most of the shingles already removed in the problem area, to give me an estimate on fixing the issue then and there. That said, I still like this company, and will call them in the Spring to get a quote to fix the decking if my shingles hump up again - everyone else gets to have a flat roof, I want one too! SUMMARY: Company was very responsive initially, worked quickly, safely, and courteously. Responded to initial minor defects in a timely manner. Later, responsiveness was uncharacteristically poor. I was disappointed that a moderate to major defect in my decking went under the radar, but was pleased that a craftsman took the time to verify the issue, show me the problem, and explain it in detail. Pretty good folks, but if you have a "complicated" home (IE: built by a DIY homeowner, has had additions put on, etc.), take the time to request they really look for defects so nothing gets missed. You will not find a lower price, and I think this is a rare case in which you get more than you pay for.

He did a thorough, professional job in making (minor) repairs to the roof of our garage.

Description of Work
We asked him to repair some damage to the roof of our garage caused by a winter storm. Charles Lepper came out, did a thorough inspection of the roof of both the garage and house and made the necessary repair to the garage. He pointed out that there are several areas of the house roof that need work. We are pleased with the work he did and will consider him in the future for repair or replacement of the roof of our house.

We have called on Chuck Lepper's CL Home Improvements for a number of different repairs and services, and we have always been pleased with the results. When our roof needed shingle and chimney flashing repairs after storms last fall, we called CL for help and within just a day or two the problems were taken care of. Same for gutter problems and damage to our home's aging vinyl siding. This summer we discovered that house sparrows had built a large nest between and behind our attic vent louvers. As soon as the sparrows' babies were old enough to be out of the nest during the day, I phoned Chuck. He came by within a day to determine a solution. His guys cleared out the nesting material and installed screened frames they had fabricated to size over the vents at both ends of the attic. I received a lower bid for the roofing repairs last fall, but Chuck's charge for the work his crew did was absolutely reasonable. I would say the same for the bills I have paid for other work by CL. All in all, I would much rather have CL's prompt, high quality work at a fair price than slower, lesser work for a cheaper price. We will turn to CL again for future needs!

We were first referred to C L Home Improvements by a neighbor when we needed a new roof. Their price was reasonable, and although the work was delayed due to a wet spring season, they were very good about communicating with us while we waited. The job itself was very fast and professional (clean!). We hired CL again to replace some rotting fascia board and again received very professional (and this time prompt) service at a good price.

It went pretty well overall. They didn't start until a couple of weeks after they were scheduled to start and even then it took 2 or 3 more days than they had projected. They did clean up the area well around the house and keep all their supplies tucked away when they weren't there.

Description of Work
They tore off three old layers of roofing down to the studs, then put on new plywood and architectural shingles.

The project was a little delayed at the onset due to heavy rains, but the company was great about calling us and keeping us informed of their schedule. Once the work was started, they were very fast and relatively clean. They finished within their estimated price. The new roof looks great and has held up nicely (it's now three years old).

Description of Work
Replaced our roof (including removal of old roof). The house is Cape Cod style (dormer windows, covered breezeway, not a real simple roofline).