A Minneapolis treehouse builder uses only recycled or sustainable materials to build his unique treehouses.

Dustin Feider has fond childhood memories of building a treehouse with his dad. Many years later, he found himself going full circle as a furniture design student at the Minneapolis College of Art and Design.

"I was totally fascinated with the idea of redesigning a treehouse and finding out what structure was best," says Feider, who launched O2 Sustainability Treehouse in Minneapolis shortly after graduating. The resulting form was a sphere. "With this shape, you get the most amount of interior space with the least amount of surface area - which equals less materials," says Feider, who travels across the country to build them.

When Mark Levin of Santa Monica, Calif., started drawing plans for a treehouse in his backyard grove last year, he says he realized his ideas were too ambitious and fell for the unique shape of Feider's structure. "Dustin created the most incredible thing I ever could have imagined," says Levin, who now has two treehouses cabled to nine trees with a 50-foot suspension bridge between them.

Feider’s treehouses are made using recycled materials and glow softly at night when lit from within.

Like the nine other treehouses he's built in the Twin Cities and around the U.S., Feider only used recycled or sustainable materials to build Levin's. The covering for the treehouses is made of hemp canvas, recycled bottles and 60 percent post-consumer waste eco- resin. A cable-suspension system is used to hang the treehouse, instead of nails, nuts and bolts. "It creates a swaying motion and keeps from harming the tree," Feider says.

Building a treehouse takes Feider anywhere from two weeks to three months, and he says they can cost from $8,000 to $50,000. If you're afraid of heights, don't worry. They range from 3 to 50 feet off the ground, but the average is around 15 feet. For entry, you can either have an electric or pulley-system elevator installed, or even a ladder made from a recycled telephone pole.

Levin has to climb 25 feet to get to his treehouses and says he enjoys every minute he gets to spend in his backyard. "I didn't want to be that guy who always talked about building a treehouse and never did it," he says. "Dustin made my dream come true." 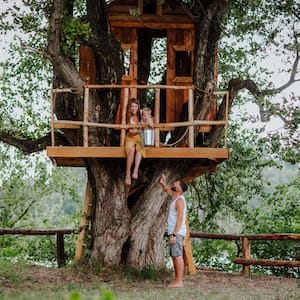 A kid- and parent-approved backyard DIY