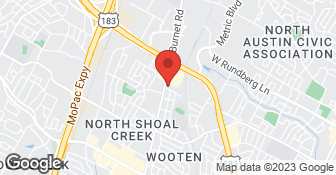 (TLDR: The job did not meet the standards set forth on their own company's website and one employee got angry and stormed off the job when asked to meet those standards. The company sent out another employee to finish the job, but the end result was still lacking and the job took twice as long to complete as scheduled.) The following is my experience with Austin's Maid Service on 4/22/17: Per the Google Invite I received from Sydnie, Esme and Yessica would be cleaning my home. Yessica was at the site just before the scheduled start time of 9am. I let her in and indicated that I would be working outside if they needed me. Esme showed up sometime later. Communication with them was a challenge because neither spoke English and my Spanish is embarrassingly bad. Around noon, they informed me that they were finished and I needed to do my walk through. The first thing I did was open the master closet doors, which they had shut. The closet was untouched. The bathroom floor had dust wiped into the corners and the tops of the cabinets had not been dusted. The baseboards throughout the home had not been touched and all of the blinds had been pulled up instead of dusted (one set of blinds was now broken and had actually been snapped in half when the cord was pulled). The ceiling fan blades still had dust on them. When I pointed all of this out, Esme began to get agitated but she and Yessica made a show of correcting these things. When they asked me to do a second walk through I noticed that the door to the converted garage was closed. I opened it to find that it was completely untouched. This room is included in the square footage of our home and so was expected to be cleaned as well. At this point Esme began to get angry with me. She told me that that room was not included and pulled up the Google Invite to prove her case. She said the job was only the 3 bedrooms and 2 bathrooms, nothing more. I pointed to the square footage number on the invite and said that that was the entire house, the job was to clean the entire interior of the house. She called someone, she didn't say who but made it seem as if it were her superior and that she was verifying the extent of the job, and when she got off the phone told me that she had confirmed that that room was excluded. She did not let me speak with the person on the other end. I called the company's main line and spoke with Sydnie again, who confirmed that the job was for the entire interior of the house and assured me that she would communicate to Esme and Yessica that it was a part of the job. Meanwhile, Esme gets more and more agitated as she tells Yessica in Spanish that they don't have to clean garages, that their job was done, that there was no way she was cleaning a garage, that they already cleaned more than they should have because the job was just for 3 bedrooms/2 bathrooms, and that they should just leave. (I have attached a picture of the "garage." It hasn't been a garage in about 20 years.) At this point, I was getting pretty agitated myself so I said something like, "Then go! You want to go, then go! I don't want you here if you don't want to do the job I'm paying for!" Esme stormed out as Yessica began cleaning the converted garage. If either received any clarification about the job after I got off the phone with Sydnie, I am not aware of it. Yessica left about 30 minutes later, but the ceiling fans were still dusty, the blinds hadn't been touched, and the baseboards through most of the house were still untouched. Also, they were white flecks on the wood floors that Yessica claimed she could not clean off. I removed them with one wipe of my finger. Yessica, considering her job done, left. Ginger, the owner, called me and told me she wanted to make this nightmare right. She sent another employee named Griselda to our house, telling me that Griselda would survey the job and make sure everything was done to satisfaction based on the company's own checklist. When Griselda arrived she actually did not know why she had been sent there and had been told that Yessica would be there to help her complete the job. She was confused when I mentioned the Move Out Clean checklist. Again, this is a list provided on their website and a link to it was in the Google Invite. Griselda did a comparatively thorough and satisfactory job, but there were still dust and cobwebs in the high places of the living room. At that point in this saga, I figured everything was good enough for pictures and showings, as a job that was scheduled from 9-12:30 had now lasted until 4pm. Ginger never followed up with me again, besides via an automatically generated email asking me to provide "constructive and positive" feedback for the company.

Description of Work
I called Austin's Maid Service and spoke with Sydnie to schedule a move out clean of my home, which was going to be photographed the next week and put on the market. I explained that the home was a 3/2, 1988 sq ft, 2 stories, with hardwood, tile, and carpet and that there were high ceilings in the living room. At that time Sydnie advised me that for an extra fee my interior windows and baseboards would also be cleaned; I elected to have those services added. While later reviewing the "Move Out Clean" checklist on their website I noticed that baseboards should already have been included, but I decided to not call back and point that out. The home was completely vacant but very dusty, as we had just moved out and some light renovations had been done afterward. I was looking for housekeepers to come every other week to my new home and I was going to consider this company based on this move out clean. I will not be hiring them ever again.

Neat Freaks is a locally a owned and operated housecleaning service with years of experience and knowledge to make your home look beautiful. We have the dedication to bring your dreams to reality and we won’t leave until the job is done right.My crew and I can handle just about anything so don't hesitate, call or click to schedule a estimate today!  …

2 B Cleaning, LLC is a professional cleaning company serving customers for more than 10 years now. We are committed to keeping your space as clean as possible with our quality cleaning solutions. Our goal is to provide you with unparalleled service and great attention to detail. We offer one time cleans, customized cleans, move outs, make readys, post construction cleans, weekly, biweekly, and monthly services. We also offer Commercial cleaning services.  …

No License Required for Trade
Insured
All statements concerning insurance, licenses, and bonds are informational only, and are self-reported. Since insurance, licenses and bonds can expire and can be cancelled, homeowners should always check such information for themselves.To find more licensing information for your state, visit our Find Licensing Requirements page.
General Information
Free Estimates
Yes
Eco-Friendly Accreditations
Yes
Payment Options
Visa, MasterCard, American Express, Discover
Senior Discount
no
Warranties
No

Austin's Maid Service is currently rated 1 overall out of 5.

No, Austin's Maid Service does not offer a senior discount.

No, Austin's Maid Service does not offer warranties.