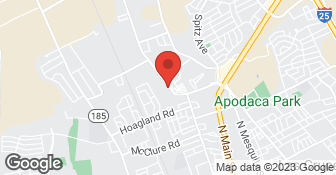 We guarantee your satisfaction and we won’t leave until the job is done right. We pride ourselves on the quality work we provide, while delivering great customer service! Check out our services offered and call or click to schedule an estimate today!

Weather you need a complete landscape installation, turf, or general maintenance care for your lawn or business, we have a team of professionals to get it done right down to every detail and for over 25 years of serving Texas and New Mexico area we have helped customers maintain a healthy lawn like nature intended and with a liability insurance policy that protects you, the home owner, you can have peace of mind while the work is getting done.

I called Mr. Guerra for an estimate for tree pruning. He told he that he was busy and that he would call me back when he was free to give the estimate. we waited over a month and he never bothered to call. Still hasn't called. He wasn't particularly friendly over the phone either. No one is that busy!

Not good. He stopped and dropped contact before job was through, accused me of lying regarding what work was done, stated he would call to address my concerns several times and never did. He removed a plant that I pointed out to him as one I wanted to not be touched. I will not make final payment.

I don't know what happened.  I called this year starting in February to have some very large mulberry trees at another rental  house trimmed.  I had to call several times before i talked to someone.  She promised me the owner would call me back.  He never did.  I finally called and got a hold of him.  He said he would come to look at it.   Again I never got a call back.  I called back again and he...

DESCRIPTION OF WORK
I have used this provider in the past for pest control.  It was several years ago on one of my rental houses.  They were very prompt - did the spraying of the trees for some kind of insects. I had no further problem with the bugs. They  promptly provided the invoice to me via mail.  i was very happy with the service.

The work was done in a timely manner and the office called indicating that the staff would be there one hour later than originally scheduled due to a delay on another job. They arrived on time and were very professional. Introduced themselves and told me exactly what they would do. The job was finished in approximately 45 minutes. The chemicals used have no smell and they will not harm pets. Two d...

We have used Dave's company for the past 5 years. He has always provided excellent service. Whether it is Dave or one of his employees they are always friendly and thorough. Insect pests are always an issue here, but he has made it as stress free as possible. I have no doubt that if there were an issue he would return and resolve it. He is someone we trust.

DESCRIPTION OF WORK
Sprayed for pests inside the house and outside.