Branch out with these dreamy treehouse ideas

It’s official: treehouses are no longer just for kids. It might be a classic childhood dream—but it’s one you can also realize as an adult (especially now that you’re old enough to use a nail gun). We’re not just talking about a plank wedged between some trees. Modern treehouses are essentially tiny homes in the sky, and the internet is chock full of treehouse design ideas and prefab options. You can DIY this backyard project yourself, or hire a treehouse builder to do the job for you.

Whether you want to build a treehouse for your kids or create your own space to get a break from your kids, these 12 ideas are just the trick.

1. A Retro Design With a Modern Feel

Photo: Courtsey of With Bear Hands

This mid-century modern hideaway by With Bear Hands, a UK-based treehouse design company, was originally created as a hangout space for teens. It uses natural wood shingles to add an unexpected texture. Get the look by keeping a close eye on materials, and don’t be afraid to use a little creative flair.

“The only thing stopping you is your imagination,” says treehouse designer Oli Lee. “Finding nice materials are key to creating the vibe you are going for with the build.”

2. A Rustic Cabin in the Canopy

Looking for adult treehouse ideas to upgrade your backyard? This design by Nelson Treehouse and Supply puts an entire cabin in the canopy. It’s got multiple rooms, a couple of balconies, and electricity—precisely the sort of thing you’d find in a luxe cabin resort. If you want a similar treehouse design, work with a local treehouse builder to pick a large tree with sturdy stems. Nelson Treehouse built this one on a seven-stem bigleaf maple tree. 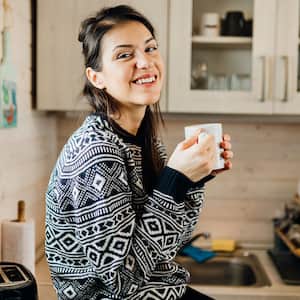 We can’t all have a backyard with level terrain or a large tree that can support a treehouse. Luckily, there is a workaround. This design by Pristine Garden Escape—which is part treehouse and part beach bungalow—is the perfect example. It’s got lift because it’s built right into a hill, but it can fully support itself. Choose a finish that shows off the natural wood grain for a rustic feel.

There’s not much to this A-frame idea by blogger Amy Allen, but this classic DIY has a big impact. Her husband got the treehouse plan from Pinterest and created the structure using pressure-treated lumber for the framing, decking for the floor, and cedar shakes for the roof.

“I'm really glad we were able to add the string lights inside,” she says. “It adds a special touch and allows the kids to continue playing after dark.”

5. A Bold, Black Treehouse With a Quirky Roof

As far as unique treehouses go, this upstate New York vacation property is anything but average. The design, complete with a peaked roof and a spiral staircase, pays homage to Victorian architecture—but it wasn’t easy to DIY alone.

“Having the peaked roof with six dormers was insanely more time consuming than expected,” says treehouse designer Daniel Beers, who took eight working months to complete the project. Was it worth it? Absolutely.

With rustic wood railings, a fresh coat of white paint, and some well-placed planters, this treehouse idea by Attic and Earth Home exudes a modern farmhouse style. The only problem was that designer Candace Schmidt didn’t have any large trees in his backyard, so he had to find a creative workaround.

“We were still able to incorporate the surrounding trees by building the footbridge in between the trees to access the treehouse,” says Schmidt.

7. A Dreamy Treehouse With Repurposed Windows

Those in glass houses shouldn’t throw stones, but what if the glass is recycled? This adult-friendly treehouse idea by Nelson Treehouse and Supply uses recycled and repurposed windows to create a cozy hideaway in upstate New York. Add a hammock and bistro lights underneath your treehouse to create an outdoor reading nook.

8. A Classic Treehouse With a Twist—Literally

This treehouse design by Georgia-based FireFly Forts has a classic look with an unexpected twist—an emergency twisty slide exit. Though the slide is a selling point, designer Michael Scaglione recommends thinking long-term.

“What appeals to your kids and family today may not appeal to them in five to 10 years,” he says. “Create a space that will grow with your family.”

When you want something a little more adult than a classic, kid-approved treehouse, try upgrading your open-air a-frame with cabin-worthy siding. To keep it sturdy, Scaglione recommends consulting a local tree service before starting your project.

“Oftentimes, a tree may look good to you and I, but an inspection by an arborist will reveal a different story.” Don’t forget to factor in tree growth, too. 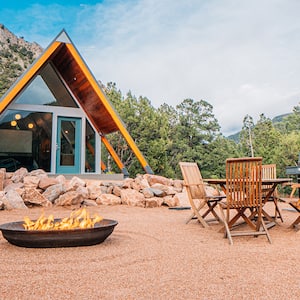 A-Frame Homes: Everything You Need to Know

The shape is a given, but there's more than meets the eye with these unique homes

10. A Treehouse on Two Levels

Want to maximize space? Utilize your treehouse’s height. This playground-perfect idea by interior designer Jennifer Wisdom has two levels of decking connected by climbing ladders. With no electricity, it’s a fairly simple DIY as long as you know how to build a treehouse. Wisdom and her husband ended up designing and building the entire thing from scratch.

If you’re looking for backyard design ideas, you can’t beat an old classic. This Alaskan cedar treehouse idea has major summer camp vibes. What sets it apart is how it matches the rest of the property. Chad Warren of Coer D’Alene Wood wanted to ensure it didn’t look like an afterthought. “We modeled the tree fort to resemble the home,” he says.

12. A Treehouse of Mirrors

Not all treehouses are practical for a backyard, but the iconic Mirrorcube proves that creativity has no bounds. This treehouse, which was created for Treehotel in northern Sweden, rose to viral fame shortly after its debut. In this photo snapped by Instagram user @gearoidmurray, you can see how the mirrors act like camouflage. Why not incorporate a few mirrors into a treehouse of your own?