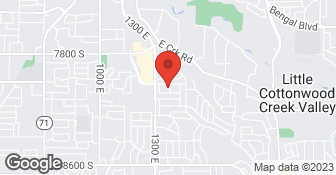 Two crew members arrived on time as scheduled. (Dennis told me he would only send one, as I was paying $70/hour per crew member and it wasn’t a 2 person job.) They quickly assessed the problem but said it would be between $400 and $500 to fix if I had them put in new valves, and if I replaced the pavers and back filled the hole rather than them doing it.They did good work and problem was resolved but-because the work was in a valve box, two people were unnecessary. $430. Is excessive for a job on this scale.

Description of Work
Leak at valve of lawn sprinkler

They did a phenomenal job. They were very professional. The workers arrived on time and were in and out. They communicated well and everything about the expeirence was positive.

Description of Work
They fixed a link from my main line out of the house to our backflow.

First off, I loved being able to set up an appointment time via text. The work was done very well. They had a tough time finding my address, but it's kind of a tough spot to find. After a quick phone call, they got there and quickly got to work. They even explained everything to my wife (who was the one home at the time), and she seemed happy with everything they did (and her standards are pretty high). I have been enjoying not having to constantly battle with the sprinklers this year!

Description of Work
I had 5 sprinkler zones that needed some attention (3 just wouldn't work, one, the valve was leaking, and the other we weren't getting appropriate coverage). They came in, diagnosed the problems, quickly got the work done, and did an awesome job!

They were punctual and quite professional. simply put, they ( Mr. Jordan and Mr. Perry) excavated the area beneath the fence and constructed a by-pass around the damaged troublesome pipe. The pipe had broken last Fall when we had the new fence put up. Since, the sprinklers were off, it was not noticed until I turned on the system this June. After further unearthing around the area of the fence post, it was discovered that it had been badly cracked and in need of replacing. Repairs were out of the question for it ran beneath the fence post and it was an old pipe. I agreed the them that a by-pass had to be constructed. Yes, it was a bet pricey,however, once fixed the rickety old sprinkler system has stayed fixed. I am satisfied with their work and would gladly call them again and refer them to any of my friends.

Description of Work
These guys are the greatest! They are on time, provide quality work and explain everything they do. They are fair priced and reused a couple of pieces they easily could have said we needed new. It is nice to see an honest company.

no show per appt.

Description of Work
no show per appy

I would recommend Akimoto Sprinklers highly. He was very quick in giving me a bid. He was not the lowest ones that I received but he convinced me that he was very well-knowledged and he has a lot of experience. His father was in the business, all he did was sprinklers, he did tell me I had an old sprinkler and it was 30 years old. I said I was going to have him completely redo my sprinkler heads or the whole big works. He told me that the galvanized piped that I have was still in very good use, I had to have a new valve put in which was leaky and he replaced that with a much better quality than most of the standard. He just really knew the sprinkling business and he modified mine a little bit. He kept the old galvanized pipe and he just put new heads. It was wonderful, I love it.

Description of Work
I have them do my sprinklers and I had a timer put on.

Description of Work
We needed several sprinklers fixed. Ryan did a great job responding to our needs and getting everything done very quickly. Great people--would definitely use again.

We do all types and material of fences such as: Wood. Vinyl, Chain link, and Cast Iron. No job is too little or too big. What makes us different from all the other Fence Companies is: We take pride in our work, we go out walk your project with you. Make you an offer to do your project. Be there ready to work. Our promise is to get your fence done in a couple of days.  …

Vargas bros was founded in 2012 with the idea of creating the yard of your dreams with a reasonable price. We are here to serve you and to offer you the best service. We are dependable and professional. http://vargasbroslandscape.com  …

We're a business that's all about making our customers happy, love to go above and beyond what people ask for! We offer a range of services from anything landscaping, yard maintenance, and snow removal. Nothing is better than seein smiles on our customers faces when all is done. Keeping value and expertise in our work! Give us a call/email us for your landscaping needs! LLEGENDLANDSCAPE@GMAIL.COM (Much more upon request)  …

How is Akimoto Sprinklers overall rated?

Akimoto Sprinklers is currently rated 4.5 overall out of 5.

What days are Akimoto Sprinklers open?

No, Akimoto Sprinklers does not offer eco-friendly accreditations.

Are warranties offered by Akimoto Sprinklers?

What services does Akimoto Sprinklers offer?