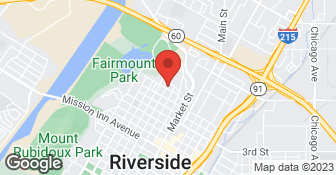 Everything went great -- the bees found a new home, we got our water meter back, and we aren't contributing to the death of the bees. Couldn't be happier.

Description of Work
Bees had taken up residence

Wonderfully -- Dennis was prompt, professional, and informative. The service is more expensive than having the bees killed, but it was an excellent price for relocation, compared with other providers.

Description of Work
Bees took up residence in our water meter, and we wanted them relocated rather than killed.

The trees in our condo complex needed to be trimmed, but the tree trimmers encountered a beehive high in a pine tree. After striking out with the first bee removal service (they said the hive was too high up), we called Dennis & Sons Bee Wranglers. They told us they didn't exterminate bees, they remove the hive and try to save as many as possible. They said they would arrive at dusk (after 5 PM) to allow as many foragers to return to the hive as possible. They were here at 5:30 just after the sun had gone down and got right to work. After donning their protective gear, Cameron climbed the ladder to locate the hive. Once the hive was located, they brought in a special vacuum with a caged box for the bees. Before long, the swarm had been transferred into the box and the hive could be removed. When the hive was brought down, the hole was filled with foam and a screen affixed over the opening to prevent any more hive building. Total time - about an hour. When the tree trimmers arrived the next morning, a few foragers were still hanging around the tree, so they sprayed them with insecticide and got to work trimming. Cameron called the following day and said that the hive was thriving at their place. This was good news, since with so many hives mysteriously dying off, every live hive is important. All in all, a great job by Dennis and Cameron :-)

Description of Work
Removed a bee hive from a tall tree on the premises.

WE NOW SUPPLY THE GOODNATURE A24 RAT TRAP FROM NEW ZEALAND! Go to YouTube and search Goodnature A24 rat trap. See for yourself how this revolutionary product works. It actually contributes to the well being of wildlife. https://www.youtube.com/watch?v=LHdTJ8XaPzM&feature=emb_logo **POISON FREE EXTERIOR RAT CONTROL** CALL FOR DETAILS. ***NON-KILL ORGANIC GOPHER AND MOLE CONTROL*** ***WE NOW HAVE MOSQUITO CONTROL MAINTENANCE SERVICE!!! SAME METHOD AND MATERIALS AS USED AT DISNEYLAND. MAKE YOUR HOME THE HAPPIEST PLACE ON EARTH TOO!*** ****WE ALSO DO 100% ORGANIC TREATMENTS FOR BEDBUGS, WASPS, BEES AND GERMAN ROACHES**** We are a pest control company for residential and commercial properties. Call anytime, George usually answers after hours. Additional phone number 213.572.7504  …

We specialize in pest control services of all kinds! We guarantee your satisfaction, and we won’t leave until the job is done right. We pride ourselves on the quality work we provide, while delivering great customer service! Check out all the services we offer below and call -or- click to schedule a free estimate today!  …

How is Dennis and Sons Bee Wranglers overall rated?

Dennis and Sons Bee Wranglers is currently rated 5 overall out of 5.

What days are Dennis and Sons Bee Wranglers open?

What payment options does Dennis and Sons Bee Wranglers provide

Are warranties offered by Dennis and Sons Bee Wranglers?

No, Dennis and Sons Bee Wranglers does not offer warranties.

What services does Dennis and Sons Bee Wranglers offer?