Guide to Growing Vines on Your Home, From Pros and Cons to Common Types

It is difficult to resist the romantic charm of a facade covered with verdant ivy or colorfully flowering vines. Climbing plants integrate a building with its landscape and instill a sense of timelessness, whether it’s English ivy on a 19th-century New England brick home or wisteria dangling from the porch of an old Southern estate.

But what are the downsides to adding vines to your home’s exterior? If it were simple, wouldn’t these gorgeous green facades be the norm rather than the exception? Read on to explore all the pros and cons of growing vines on your house.

Common Types of Vines for the Home

There is an almost endless array of vines and other climbing plants you might consider growing on your home’s facade. There are both annuals and perennials, vines that flower or grow fruit and those that don’t, evergreen varieties and those that display fabulous fall colors. Some of the most popular varieties for home exteriors include:

When you picture a flowering vine, the eye-catching blossoms of the woody clematis vine likely come to mind. These low-maintenance perennials bloom between late spring and fall and can add a colorful burst to your doorway, porch, or shed.

Perennials with aerial roots, trumpet vines are a great choice for sunny and arid climates. Their tubular flowers are a favorite for hummingbirds, attracting these tiny avian wonders just outside your windows.

With just a little training, you can grow one of nature’s most sweetly fragrant plants along the walls of your home. Jasmine climbs by twinning and needs a trellis or similar structure for support.

Popular in colder climates, like New England, English ivy is probably the first thing that comes to mind when you think of climbing plants on a home’s exterior. The evergreen perennial can climb as high as 80 feet, attaching itself to surfaces with aerial rootlets and growing aggressively.

Do careful research before planting it; English ivy is classified as an invasive species in some areas and it’s one of the climbers most likely to do serious damage to your home if not carefully maintained.

Boston ivy is not related to English ivy. It is not evergreen, but turns red in the colder months, and it climbs via disk-shaped, adhesive holdfasts. Likewise popular in the Northeast, it does offer a similarly stately visual impression while being easier to maintain and posing less (but not nonexistent) risk to the buildings on which it grows.

Another less risky alternative to English ivy, Virginia creeper is a close relative of Boston ivy. Its compound, five-point leaves change colors in the autumn. It also grows dark-blue berries that are dangerous to humans, making it a plant perhaps best avoided by those with young children and pets—but one that’s perfect for those looking to attract birds.

Wisteria can be difficult to manage—especially in its Chinese and Japanese varieties, prohibited as invasive in many areas—and its seeds are dangerous to people and pets. 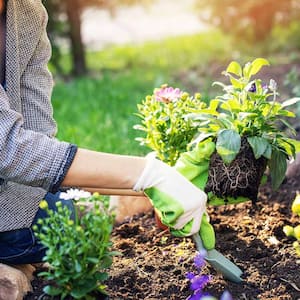 What to Plant Over Your Septic System

The ground above your septic tank doesn't have to be a barren wasteland, as long as you choose your plants wisely

Pros of Outdoor Vines on Homes

There are good reasons why some homeowners go gaga for vines.

Ivy and climbing vines make a unique aesthetic impression, lending a building the appearance of venerable grace and situating it cleanly within the natural landscape. As underlined by the name given the Ivy League universities, there is a long association between such plants and upscale luxury.

Beyond the cultural connotations, a plant growing on a building adds an additional dimension to the structure, establishes greater variety of texture and color, and imparts vertical interest. Vines can also serve to cover up any imperfections in a building’s surface.

Hanging plants add another layer between the privacy of your home’s interior and the bustling publicity of the street. Some species are dense or leafy enough to be trained to obscure portions of windows or doors, while others can be added to a trellis to further shield your family from prying eyes and disruptive sounds.

By greening your facade with hanging plants, you also create a barrier between the exterior walls of your home and the blistering rays of the sun. By preventing solar radiation from reaching the building’s surface, you can keep the interior cool and temperate with fewer resources and less money put toward air conditioning.

Vines are the variety of plant that is perhaps easiest to propagate from cuttings. It takes only a few steps to bring the feel of the jungle right outside your window with a cutting taken from a relatively established vine in the springtime, when they’re dormant.

Cons of Outdoors Vines on Homes

There are likewise good reasons why some homeowners keep their plants on the ground.

If you choose the wrong climbing plant or fail to properly care for it, it can do serious damage to the structure that supports it. Ivy and some species of vine trap moisture, preventing it from evaporating away from your home. This can lead to rot and the deterioration of masonry and mortar.

Hanging plants can also hide urgent problems with a building’s exterior and facilitate insect infestation, forming a generous on-ramp for termites and other wood-eaters.

In the worst-case scenario, highly aggressive vines can harm and even destroy the whole facade of a building. Left unchecked, they can twin around gutters and tear them down, grow into gaps and cracks and then expand to such a size that they break stone and concrete, and develop root systems that choke and damage the foundation.

Self-adhering plants like English ivy can simply rip away the siding and mortar on which they grow. The good news is that not all vines pose these kinds of threats—and that with ongoing, attentive care, even the most dangerous ones can be contained.

Vines aren’t necessarily more difficult to care for than other plants, requiring water, fertilizer, and trimming. From the perspective of growth, it is, in fact, much easier to nurture a vine to its full flourishing, but therein lies the problem. Because they grow on the surface of your home rather than the soil, the consequences of failing to keep them trim and to train them are more severe.

An aggressive species like wisteria can quickly destroy tiles or stucco, ruin gutters, or grow into windows. Hanging plants’ ceaseless spreading can pose difficulties even when it doesn’t threaten the integrity of a building, overtaking garden beds, roofs, and other places they aren’t desired.

Some species, like kudzu, grow so abundantly and rapidly that they displace and ultimately eradicate the native flora in areas where they are newly introduced.

Before planting, it’s also worth thinking about how the plant in question will spread since it will determine where much of this maintenance takes place. Be sure you’re comfortable working on a ladder or your roof if you don’t plan on hiring a local gardener to care for it.

Some vines and hanging plants, like English ivy, can become an attractive environment for pests like mosquitos as it grows larger and thicker.

Like many other kinds of plants, vines shed a variety of debris as they grow and develop. Depending on the species, that can result in the unsightly accretion of thorns, rotting fruit, or dead leaves and flowers just footsteps from your door.

Add shade and style to your backyard with a pergola

Tips on Caring for Vines and Avoiding Damage to Your Home

The requirements of nurturing a vine, and the particular challenges it might pose to your home, depend on the specific plant and the conditions of your home. There are some steps you can take and general things to keep in mind as you weigh the costs and benefits of greening your facade.