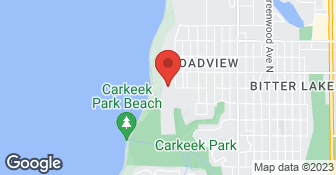 Fractal Renovations is a full-service general contractor specializing in home remodeling, addition and new construction projects. We welcome condo work, and light commercial contracts as well. Between owner and employees we provide 60 years of combined experience. We execute quality work on time and within your budget. We are happy to assist with design or provide referrals. Please contact us for a free quote, - Team Fractal ...

A fence A new fence and deck repair that we just we added on to a bathroom remodel contract.

Blake came up with a very effective drain system that directed the water away from my garage door and into a drain field which he designed. Roberto was the foreman and he was prompt and completely professional. They came when they said and stuck around until I was happy with everything. Their cement work was particularly good. I've already told someone about them and will not hesitate to use Blake and Fractal again. These are good people.

Description of Work
I had a persistent flooding problem in my garage from water runoff.

A remarkable mess. I hired Blake of Fractal Renovations Inc. in September. with a review of the work. It wasn't much. Essentially 3 items: 1. Remove 100 years of linoleum flooring w/ 1 layer of plywood in the middle. Sand & refinish fir floors beneath. 2. Put in new granite countertops 3. Stain cabinets to match or at least go well with the newly finished floors. His crew appears to be unskilled laborers who he teaches along the way. One guy spends his day in video calls with someone (presumably his girlfriend) and does his work with one hand. Everyone's very charming. When the cabinets got stained I looked at them and was stunned that each one was a different color. I found a smartphone app that took a photo and would give yuo the precise Pantone color of what you were looking at. I scanned each cabinet and got a menagerie of Pantone colors. I took these images to 3 stain companies to try to figure out how this could happen. No one had a clear answer. It shouldn't be possible. The best they could come up with is someone mixed two or more stains into one can and then failed to shake or adequately mix the mixture so each time a brush went into the can, a different color came out. Even with mixing stains, if they then shook the mixture, the result would be all the cabinets would be one color. So Blake came out and said he felt the cabinets looked fine. I pointed out to him that he has earlier in the year told me that he was color blind, so what on earth was he talking about? I showed him the Pantone analysis that had textual descriptions of each color. Clearly these were different words describing the colors. Blake relies heavily on his smile and charm, but they were wearing a little thin at this point. He had his crew come out and sand the stain off. After 3 days of intense noise they had sanded 5-6 of 30 surfaces. Basic math suggested that the resultant cabinets would be more expensive than replacing them with new ones. I called him and suggested this. He go quite excited and rushed out showing me brochures of a couple cabinets shops. I was puzzled about the excitement. I pointed out that I was not going to be buying new cabinets, but he was. Whoooa! He didn't like that idea at all. He was back to sanding. He said he'd have the guys speed up. The next day his team blew through the veneer on the cabinets ruining them. Blake said he'd build new doors and surfaces in his basement. I pointed out I didn't hire him to do cabinetry but if he felt he could do a good job, I'd accept this arragement. Several weeks went by including the Christmas & New Years break. Remember I hired him in September. I got a text message indicating he wasn't happy with the result and would find a cabinet expert to do the work. A few weeks later a fellow who appeared to be very experienced in cabinets came out and looked at things. He surmised that demolishing the granite and cabinets and replacing them with new would be roughly the same price as fixing the existing and staining them in place. He put together a bid for Blake who then sent me a photo of newspaper article about a company that sold replacement cabinet doors. No mention of the cabinet expert of his bid. Clearly Blake didn't want to pay for doing the job right so he was trying to convince me that doors.com or whatever was the way to go. Blake is not honest with his customers. His crew is not skilled. They have no idea when they are out of their depth on a construction project. They just do as they're told and Blake appears not to understand when he's out of his depth. They just march on creating more and more problems at greater and greater expense. I'm referring this to Labor & Industries and his insurance company. I fully expect this to go to litigation (court). This is absurdly time consuming, frustrating, and expensive. To suggest I would not recommend this company is a hilarious understatement.

We professionally refinished this customer’s cabinets and they looked great to us. However, the customer was unhappy with the typical color variance of natural stained wood. We offered to pay for replacement doors to resolve the issue.

Blake came out promptly for an overall assessment of our existing shower's condition, had a plumber checking the condition of the drain, and had a crew out within a week or so to tear out the old shower and build the new one. He was easy to work with, always responsive by phone/text, and was very helpful suggesting replacements for the tile, accents, etc. And his crew was fast and professional. The entire tear out and rebuild only took about 4 days, and the new shower looks great.

We tried to set things straight with this customer however they refused to allow us reasonable time and scheduling flexibility to complete the punch-out. The customer threatened to issue this negative review despite being quite happy with the work last week. I don’t think it’s fair to impugn our reputation without first allowing us a modicum of flexibility with scheduling specialty sub contractors to complete any corrections etc.

Excellent and prompt.Blake was a pleasure to work with on short notice.

I had some huge holes in the drywall that needed to be patched up after a lead-pipe replacement project was completed by plumbers. Blake accepted the job and came over the very next day. He was courteous, polite and worked diligently to complete the project in two days. Holes were patched in the washroom, under the kitchen sink and in the bathroom. What I noticed about Blake is that he was very organized and worked hard to keep the mess in my house to a bare minimum!

Blake was very prompt in his reply to my inquiry. I was impressed with this as most of the time, this is not the case. He asked some very important questions including if we has access to another bathroom during the remodel. When I realized the scope of my work, I decided to wait until fall to do the project. Thank goodness he asked the right questions! I was very pleased with our conversations. Blake seems like the real deal!

Renovate Design/Build is a woman-owned family business servicing the Greater Seattle Area. Each person on our team is an integral part of our company's success, providing excellent service and beautifully finished remodel projects for our clients. As a small business, every job is important to our team at Renovate - you are never just a number. Please call us today for a free consultation!  …

The Green Brush is a Seattle-based painting company dedicated to the use, promotion, and education of the highest quality non-toxic paints and stains. Our skilled craftspeople are friendly, knowledgeable and highly dependable with over 14 years of professional painting experience. Contact us today!  …

We specialize in interior and exterior painting services, cabinet painting, staining, and more! We have 10+ years experience and guarantee your satisfaction, and we won’t leave until the job is done right. We licensed, insured, and bonded. We pride ourselves on the quality work we provide, while delivering great customer service! Check out all the services we offer below and call -or- click to schedule a free estimate today!  …

FRACTAL RENOVATIONS INC is currently rated 3.9 overall out of 5.

No, FRACTAL RENOVATIONS INC does not offer eco-friendly accreditations.

Are there any services FRACTAL RENOVATIONS INC does not offer?