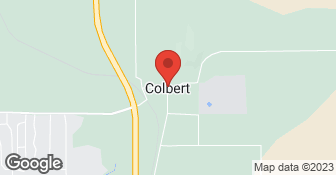 Evergreen Horizon, LLC is a full service, licensed, bonded and insured general contracting company. To learn more about our services, please visit our website at: www.evergreenhorizonllc.com. Thank you!

I'm giving this company one star because the owner Josh tells me my deck will be built by him and his one experienced helper who is very good. I trusted this to be true so I left the job to be done while I worked out of town all week. It turned out, Josh handed the job over to his one experienced helper and an inexperienced new hire who didn't know what he was doing. I wouldn't of minded had I been asked prior to the job starting, however anyone knows when you hire an inexperienced new hire, the job takes longer and the quality is not as good. Josh left the job up to his one man to train the new hire and also do the work. So of course, there are areas of the deck where the wood was cut off angle and there is another area where the one board is bulging because there isn't anything behind it for it to be screwed to and attached. Also, my complaint with this company is I was very adamant about installing fascia between the deck and up next to my house because the old deck wasn't done that way and over years had leaked water into my sub-floor and rotted it. Josh assured me that "they always put fascia along the house where the deck meets the house". I just found out a few days ago when I had a mold inspector come to my house that there is not fascia between my house and deck. I realize it has been over a year since the deck was completed, however I didn't know until recently that the fascia is not there. I contacted Josh two different times in a matter of a week and a half and left a message on his phone. No response. So I texted him and his response is " Please contact my office during business hours. This is my personal cell phone and we are not currently under contract" Really Josh...this is the number you have listed on the Angies List website. If you don't want people to call it, then change the number. Also, you state in your description on the YELP.com website, " Unlike our competitors, we are always on call and available to thoroughly answer your questions and concerns every step of the way and ANY day of the week". They also state " rest assured, we will provide reliable HIGHLY skilled professionals." And in caps they say: "IMPORTANT!!, If you want your project done right the first time, without the hassle, give them a call". Unfortunately, I have not experienced these promises from this owner. In addition to the things listed above, they installed new rain gutters because my old ones leaked water all over the deck and is what caused the old deck to rot in the first place. And the new gutters they replaced have been leaking in the same exact place! I wasn't going to contact the company regarding the gutters or the bulging deck board because I figured I could get someone to fix this. It wasn't until after finding out that they never did install fascia between my house and deck, that I contacted Josh and unfortunately he says "were no longer under contract". Really, like I'm suppose to know by looking at my deck and without knowing what I'm looking for that no fascia was installed. All I can do now is hope that other people find another contractor who truly cares to follow through and make lasting relationships with customers.

Pressure Plus LLC is your local Painting and Pressure washing specialist. We provide services for both interior and exterior for both commercial and residential properties. Our staff is dedicated to providing you with quality work that will last, in the most efficient way possible to save you money.  …

Evergreen Horizon, LLC is currently rated 2 overall out of 5.

No, Evergreen Horizon, LLC does not offer a senior discount.

No, Evergreen Horizon, LLC does not offer warranties.