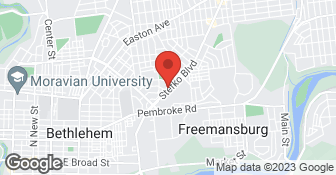 Tru-Comfort was formed in 1988 by Tom Grello and Billy Lilly, who together had 32 years experience in the industry. Our installation experts will install heat pumps, central air conditioning, oil and gas systems, and hot water tanks, as well as humidifiers, dehumidifiers, water softeners, electrocstatic and electronic air filters. With Tru-Comfort you'll get "Service at its Best". We service any brand name equipment and have a full service department on call 24/7 for emergencies. We've earned our reputation by providing products and services of the highest caliber. Additional emails - t.grello@tru-comfort.com. Additional website: www.tru-comfort.com...

We specialize in ductless mini split A/C and Heat Pump systems*** We offer a 100% Satisfaction Guarantee.*** We have been servicing the valley for over 28 years ***We offer 24 hour emergency service for customers of ICS.  …

Serving the Lehigh Valley and surrounding areas for over 85 years. Our staff of over 40 Team Members are here to exceed your expectations every day. Check our website for promotions specials.  …

Did not show to do the work that they were paid to do. Asked for refund but have not received a reply.

I have an annual service contract with Tru-Comfort. In all past years, they would notify me when it was time to schedule my annual maintenance visit. This year, I suddenly noticed it was way past 12 months since the last visit and they had not contacted me. I called to inquire and they said they are no longer notifying customers; customers have to call in on their own if they want to schedule. I a...

Description of Work
annual maintenance on AC and heating system

Overall I'd give Tru-Comfort a B+. Pleased with my service. Had a new hot water heater, new furnace (converted from oil to natural gas) and a central A/C unit installed. They also removed the oil tank and ran additional gas lines. They had to bump back my install by two weeks because they were swamped. I can understand because it was November, so I was okay with it. Tru-Comfort's technicians worke...

Worst experience ever. The owner Bill is rude and very unprofessional. Had an appointment with him at 9 am but my tenants didn't hear him knocking the door. I called back 15 mins later to apologize and reschedule. I apologized many times and tried to calm him down but he was getting all mad and went on and on for 20 mins and then hung up on me. I was so shocked when he said, "your tenants didn't a...

Description of Work
estimation of a replacement of boiler

Quoted and left me brochure for a Variable Control System but when came down to actual model numbers on contract they switched to a lesser system at same price so I went with another vendor. The lesser system was a modular system and not what the brochure listed. Turned out for the better as I went with Comfort Solutions.

The quote and installation were excellent, however throughout the process communication from Tru Comfort was poor. The sales and installation personnel were prompt and knowledgeable. The installation crew was very consciencous and neat while doing things such as cutting dry wall, and they cleaned up at the end of each day. The equipment that Tru Comfort recommended was well thought out and made our home environment comfortable. Unfortunately, communication throughout the process was difficult. Often, our phone calls and emails weren't returned. Required post installation inspections were drug out for two months because of lack of scheduling by Tru Comfort. Had it not been for their poor communication we would have given Tru Comfort top ratings in all categories.

Description of Work
In May 2014 Tru Comfort installed central air conditioning and replaced our gas boiler.

In Mar. 18,2014 my air unit started making noises called tru-comfort Tech said unit was dirty, he recommended uv lights on all units, we went with 2 at 1017.20 dollars. So we had appt. at that time for May8,2014. Then they had me buy yearly service for $381.20 Thought units were good for cooling season turned on cooling June 9,2014 and the units with the new uv lights were not cooling. Tru- Comfort said they would be there around 12:00.Called around 2:00 ask where they were said they would be in an hour, tech was finishing job.Called at 4:00 told they have other people to service also,Then they sent a tech out named Denny told him I wasn't happy with their service. He said he wasn't the one to tell,and I said I had talk to someone on the phone. Everytime I have a service call with them they are hours Hours late with no phone calls. I told him I would get another Co. to service us,He said I had to do what I had to do. He said he serviced it and away he went. I my friend and husband went upstairs after he left and it was not cooling. We called another Co. and their tech had it fixed in 5 mins. It was Wired wrong and loose wires. Called Tru-Comfort and she asked if a manager could call us back. NO CALL,NEVER DO BUSINESS WITH AGAIN

Description of Work
Poor Service, Does not show till hours later than appt.

Tru Comfort did the install work and has provided bi-annual service calls. The work is professionally done. We are satisfied and would use them again.

From estimate to installation all was handled professionally. All people showed up as scheduled, were neat and finished the job when expected. I would definitely use them again, and I reccomend them highly.

I purchased a HVAC system from Tru-Comfort, 1309 Stefko Blvd., Bethlehem, Pa 18017, 610-691-1889. About 4 years ago, from Mr. Bill Lilly, who is a salesperson and owner of the company. After the installation of the system, every thing seemed ok, they were on time, very polite, and cleaned up well, just as promised, and I entered a comment on Angie’s List how satisfied I was with them. At the time of sale Mr. Lilly said that his company stands behind their work 100%, should anything go wrong due there workmanship, it will be taken care of at no cost to me. Well recently my sewer line got stopped up, and the only way we found out, was my wife said she heard water running down the basement. She went down stairs and said to me there is a flood down stairs, and I better check it out ( I am disabled, have problems walking) so I went down stairs to check, and found sewage coming out of the sewage pipe, and the piping inserted for the HVAC condensate lines was blown out of the Main sewage line. So I have no idea how long this sewage was coming out of the main drain. I called Tru-Comfort and they sent a technician ( Tyler) right over. He Accessed the Problem, and told me that when his company installed the condensate line into the sewer pipe, they did not tap it, as the hole for the tap was drilled oversized, so they inserted the line using some sort of epoxy . With the back pressure from the blockage in the sewer line, it blew the condensate pipe right out of the sewage line. Even if the condensate line did not blow out of the sewage line, I still would have had a flood. This was bad engineering on the part of Tru-Comfort. They never took into consideration that there might be a sewer back up. They are now doing it the way it should have been done in the first place. (not using the sewer line) going directly outside with the condensate line. The day they came out I was charged $90.00 for the Call, plus another $188.00 for the cleanup of the sewage. (which took a half hour to clean up with the vacuum) Mr. Lilly says he is not going to charge me for the new installation of the condensate line, but the other two charges will remain. What happened to that guarantee, if something happens and it was due to their workmanship (engineering) they would repair the problem and at no cost to me. The sewage in the basement was caused because of Tru-Comfort, I know there was a blockage that caused it, but if it was done right the first time, I would of known I had a blockage because the toilet or sink would not go down, and I would of called a plumber and not had the expense of calling Tru-Comfort. Mr. Lilly claims Tyler (technician) is only out of school one year and he would not know if it was tapped or not, does that mean his company sends out people who are not qualified to recognize a problem and to correct it, especially in an emergency, or evaluate the situation, why did I pay $90.00 for someone who Mr. Lilly says is not qualified as he is only on the job for one year. If the hole was tapped, why did they put a boot around the pipe to stop the leak instead of putting in a plug? I spoke with Mr. Lillie, and he said to compensate me for my expenses, he would authorize two free service calls. I do not see how 2 service calls, would cover the charge of $90.00 plus $188.00 expense out of my pocket when all this was supposed to be covered by Tru-Comfort. If you are going to deal with this company, I recommend you get everything in writing. I lost all my respect for Tru-Comfort as their word means nothing. If I do not get the two service calls as promised, I will have no other recourse but to go to small claims court. I have plenty of photo’s of before and after. Sincerely Myron Baron

Description of Work
Re-engineered the condensate lines, the way they should of been in the first place.